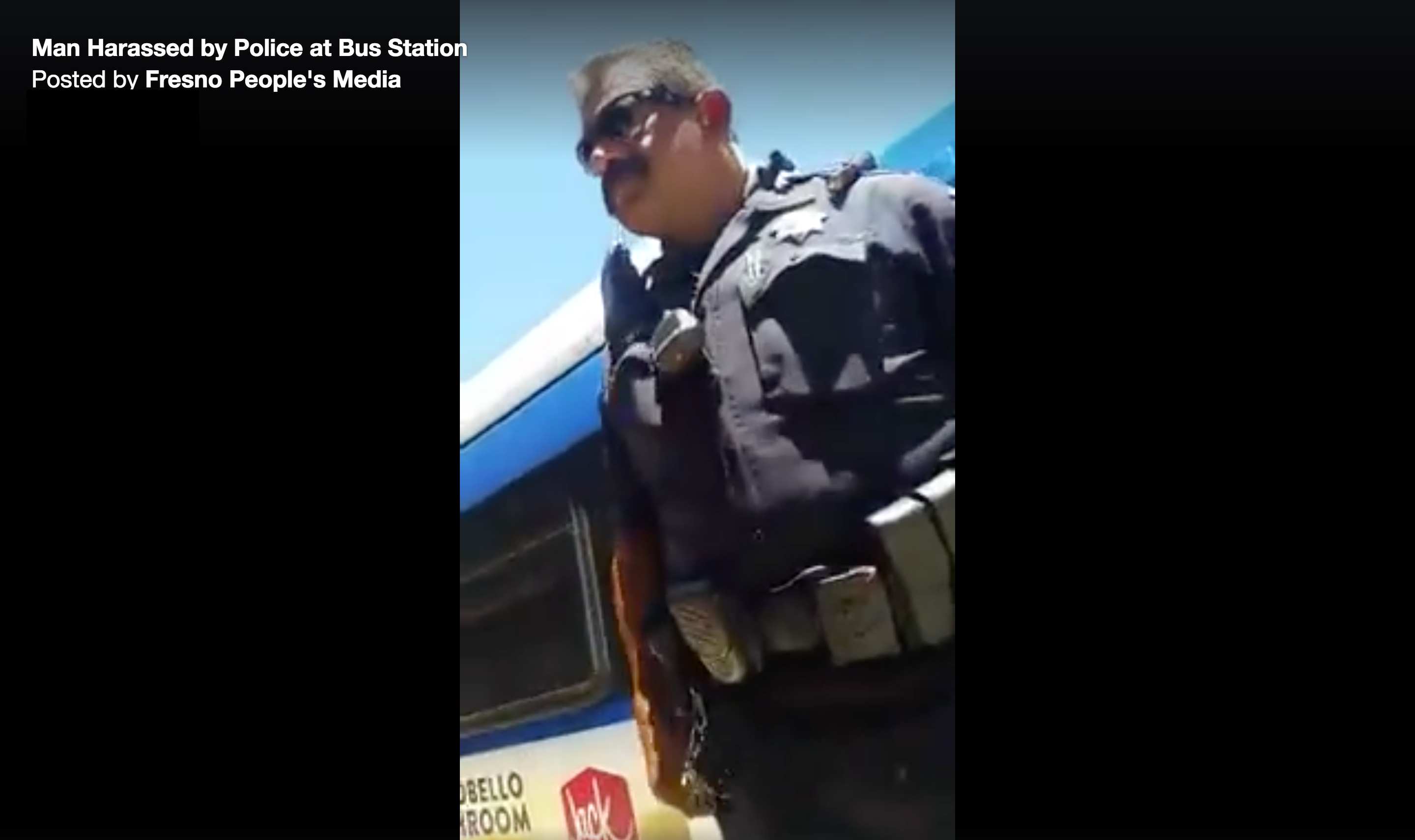 This post was originally published at Fresno People’s Media

Jesse Paz of Fresno, CA said he was having a conversation with one of the youth from the fitness club he’s a youth minister at, waiting for a bus at the FAX Transit Center at Manchester Mall. Officer Ruiz approached the youth and told him he had to leave.  Jesse said he told the youth “you better hurry up and go or else.”

That’s when Officer Ruiz started harassing Jesse and told him he wouldn’t be allowed to catch his next bus. He would have to walk himself and his young daughter home in the Fresno heat.  He would not be allowed access to public transportation, that he already purchased a ticket for, all because he said something that Officer Ruiz didn’t like.

If Jesse’s story is truthful, then this behavior from Officer Ruiz is nothing other than harassment and a deprivation of his rights under color of law.

“Julisa had to go to my work with me today. I just clocked out and we caught the FAX (Fresno Area Express) bus to Manchester Mall. I saw a youth from 701 United and started talking with him, when this Fresno police officer, Rudy Ruiz – badge ‪#‎P379‬, came up to tell the youth he had to go.

That’s when I proceeded to tell the youth “you better hurry up and go or else.” implying that the officer would arrest him. Officer Ruiz proceeded to come up and harass me, telling me that I could not ride the bus although I had already purchased my and Julisa’s ride.

It’s hot, Julisa had to use the restroom, and we were both very hungry. The officer could not tell me what I did wrong and why I could no longer ride the bus.

So I have called the department and asked to speak with his sergeant. Waiting on their call back. Julisa was scared because he literally walked us away from the bus station. He also threatened to take me down if I did not leave the premises.

Can someone help me? We are in shock right now.”

UPDATE from Mike Rhodes with the Community Alliance Newspaper:

Seeking answers, I submitted a California Public Records Act request to the City of Fresno and Fresno Police Department seeking Ruiz’s body cam video and the incident report. I also reached out to Paz, who said he was not interested in doing media interviews.

The city took a long time, well past the 10 days mandated by the law to respond to a CPRA request, but they did eventually provide some detail about what happened before the Paz video began. In what the police call an “event report” Ruiz says that before the incident with Paz he had contacted two black men, one with a shopping cart and he asked if they were planning to catch the bus. The report says “They were not and were politely asked to leave property. Both subjects were cooperative and began to leave.”

The report continues, alleging that as the two men began to leave, a Hispanic male adult (HMA) and a young girl approached (presumably Paz and his daughter). Ruiz claimed Paz said, “watch yourselves, Bro. These motherfuckers just want to put you in chains.” Ruiz’s report says, “He continued cursing and carrying on about being an MMA fighter. . . I asked him to leave property due to his boisterous, unruly behavior. He initially refused and then complied.”

In the video that Paz recorded, he did not seem boisterous or unruly. In fact, he seemed amazingly calm, courteous and insisted on getting officer Ruiz to give him a reason why he was being prevented from taking the bus. When I talked to Paz, he was always polite and never cursed.

The obvious solution to how we can resolve this dilemma is by viewing the body cam video that officer Ruiz recorded. Whenever an FPD officer is going to interact with the public, the policy is for them to turn on their body cam. The body cam is clearly visible in the video recorded by Paz.  This is why the City of Fresno has spent money on this new technology – to clear up incidents like this where the facts are unknown or there is a dispute of the facts.

In a response to my CPRA request, City of Fresno attorney Douglas Sloan did not release the video, saying the FPD “did not locate” the “body cam footage.” My sources, who have asked not to be identified, claim there was a malfunction with officer Ruiz’s body cam.

Larry Donaldson, a City of Fresno attorney who is the liaison with the FPD, called to tell me that CPRA requests do not apply to body cam footage. He would not confirm or deny a video existed of the encounter between officer Ruiz and Jesse Paz, but if it did they would only release it if they were issued a subpoena. Donaldson paused and added that another route to releasing the video would be if FPD chief Jerry Dyer released it. Dyer, he said, has the discretion to release body cam video.