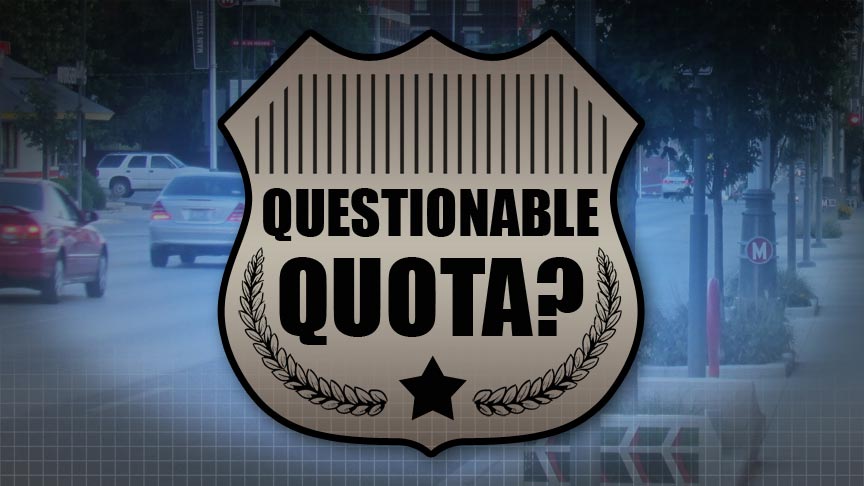 A Texas police union has exposed a quota racket in the Arlington Police Department – but only after the system negatively affected numerous officers.

In May, 15 Arlington cops were suspended and placed on administrative leave after an internal audit revealed that the officers had been inflating traffic stop data in order to make it look like they were making more stops than they were.

Officials would not speculate at the time as to why the cops would report false data, but internal e-mails and documents released by the Arlington Municipal Patrolman’s Association (AMPA) on Monday reveals that the department has been using an informal quota system that punishes underperforming officers.

After it came to light in 2014 that during the previous two years, the department had issued more than 4,400 citations in the four blocks of Cooper Street between Park Row and Pioneer Parkway, the Tarrant County Peaceful Streets Project started protesting the speed trap by alerting oncoming traffic with signs that read, “Speed Trap Ahead.”

This is when the public began questioning whether or not the department was utilizing a quota system, but police spokesperson Lt. Christopher Cook assured concerned citizens at the time that no quota system existed.

“It’s actually a very common misconception that we make our officers meet a ticket quota,” Cook said. “But in fact, state law makes it illegal for any department to issue mandatory quotas to its officers.”

Many departments get around laws prohibiting quotas by simply calling them things like “performance targets” or “doable averages.” In Texas, the state Transportation Code prohibits both formal or informal quota systems.

The documents released by the AMPA show several incidents in which Arlington supervisors appear to have been exercising an informal quota system. In emails sent in 2010, an unidentified West Patrol District sergeant would list the average number of citations per officer for the district, followed by each officer’s average.

In others, comments say things like, “I will say that when the shift performs at, let’s say, average of 8 per person per week, you should be right there,” and “Let me sum up: please issue citations, whenever you can, and with those numbers….please just be average.”

Additionally, in an instance of an officer applying for extra duty at a Rangers game, the cop was told that the authorization was “subject to being rescinded” if their “work performance regarding traffic enforcement and self-initiated activity [did] not improve.”

The AMPA says it does not condone the actions of the 15 officers under investigation for falsifying data, but state that the implications of an informal quota system – which would foster such misconduct – should not be ignored.

Those officers are still being investigated by the District Attorney’s Office, who will determine if they will face criminal prosecution. The Arlington police department has not commented on the released documents.