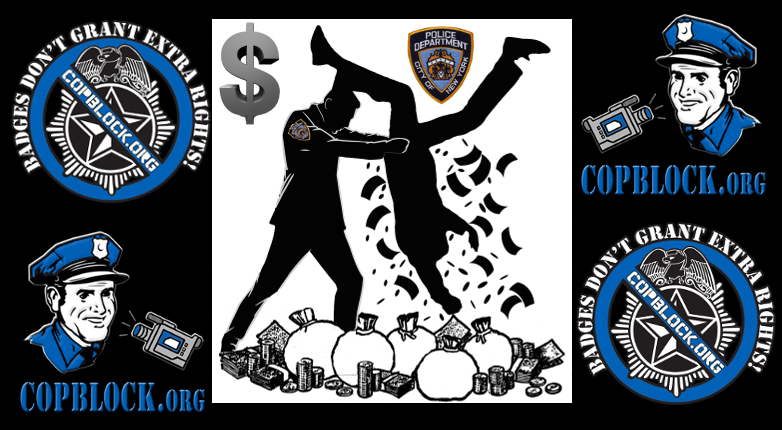 As everyone in the world (and several other parts of the galaxy) knows, civil asset forfeiture laws are essentially a license to steal for police departments. Without any real or substantial evidence being required, members of the Gang in Blue are given the opportunity to snatch cash and other valuables from citizens not affiliated with the mafia family they work for.

Even if those that have had their money and/or property stolen are never convicted or even charged with a crime, it’s very difficult and sometimes impossible for them to get those possessions back. Not only is there no legal burden for the government to prove what they stole was derived from illegal activity, victims of their thievery are instead forced to prove a negative and show that it wasn’t.

There’s no shortage of examples of innocent motorists being preyed upon by Road Pirates, many times based on nothing except the fact that they have out of state license plates. Sometimes, it’s just a crime of opportunity and nothing more. I.E. some very minor “infraction” is spotted by a Revenue Generator and they use that as a pretense to pull a driver over when the true and sole purpose is just to troll for something worth stealing.

The other common source of forfeiture plunder is even more problematic. Along with that license to steal comes a license to kill during drug raids. Once those Drug Warriors suit up in their military gear, strap on their military weapons, and climb into their military vehicles, even babies sleeping in their cribs and innocent neighbors aren’t safe. But that money ain’t gonna steal itself and drugs aren’t gonna disappear from evidence lockers by them self. You know how the old saying about omelets go: sometimes you gotta murder an innocent, 92 year old woman and then plant drugs at her house if you wanna steal her money. Over the years, the for-profit policing methods spurred by the advent of asset seizure laws have been so lucrative that many police departments, especially those in small otherwise crime free communities, have come to derive a good percentage, if not the majority, of their budgets from a combination of forfeiture theft and speedtrap/checkpoint revenue (the latter often overlapping with the former). As was reported by CopBlock Network contributor Asa Jay last week, the Road Pirates in Oklahoma have even come up with a way of stealing money from debit cards recently.

Obviously, New York is a big enough city to have other ways of stealing from citizens beyond relying solely on the police to shake people down directly. However, the world’s seventh largest army, otherwise known as the NYPD, does its share of fleecing people within that city, too. After all, when you have access to what amounts to free money, why not take advantage? (Outside of ethical reasons, which they constantly prove aren’t an issue for them.)

In fact, they have a pretty elaborate system and a set of co-conspirators within the District Attorney’s office working to ensure that people don’t get their money and property back once police find an excuse to grab it. The Bronx Defenders, a law firm that has filed a class action lawsuit against the NYPD on behalf of the victims of asset forfeiture within the city has detailed just how their scheme works within the suit and it’s really pretty simple.

“They have set up such a complicated process that some people give up and never get their property back,” said lead attorney Molly Kovel of The Bronx Defenders.

Kaleb Hagis, one of the new plaintiffs, said cops seized his car, $2,932 in cash and four cell phones when he was arrested in Sept. 2015. His vehicle was returned in December, but he is still fighting to get the phones and cash — even though charges against him were dropped in March.

After putting in a request to the NYPD property clerk for the items, an individual has 270 days to get a release form from the district attorney.

After that deadline, the NYPD can “dispose” of the property.

“My case was dismissed,” said plaintiff Kenneth Clavasquin, whose phone was seized when he was arrested in June of last year. “I don’t understand why I can’t get my phone back from the city!”

The original plaintiff, Victor Encarnacion, said he only received his phone taken during his November 2014 arrest after the lawsuit was filed earlier this year and seveal months after his case was dismissed.

Requests by his attorneys were ignored, according to the complaint. During a Sept. 2015 visit to the DA’s office with his attorney, Encarnacion was told he could not get a release.

It’s a good racket if you can run it. After you steal people’s property you give them a limited amount of time to get it back before you are allowed to “dispose” of it. Then you get your friends at the DA’s office to stonewall them until that time runs out. Robbing banks is for amateurs.

Fortunately for them, the guy who gets to decide whether they have to stop stealing people’s money is also on the same payroll as them. More than likely, at worst their robed co-worker will just make it just a little bit more difficult for them to snatch people’s stuff.