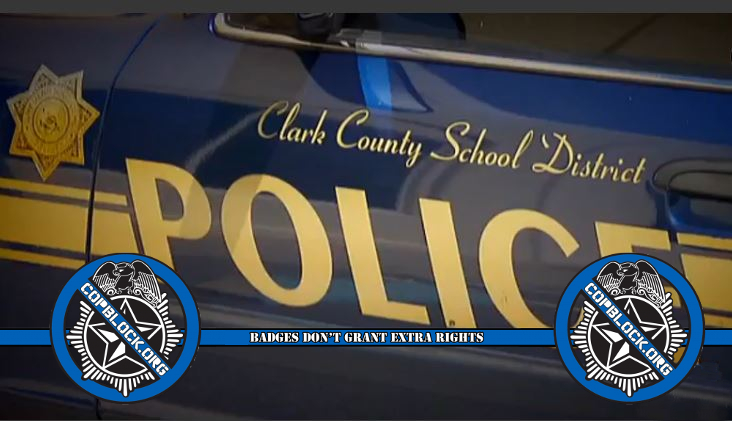 Yet another Las Vegas area school cop is under investigation and this time it’s the detective in charge of conducting investigations on other cops. Detective Christopher Klemp, who was in charge of the Clark County School District Police Department Internal Affairs Division, has been accused of threatening other officers and suppressing evidence in order to influence investigations he took part in.

The allegations against him were included as part of a complaint filed with Klemp’s supervisors by a former CCSD Police lieutenant, who was fired in 2015. part of that complaint included audio recordings of phone calls between the former lieutenant and Det. Klemp.

According to transcripts of those recordings, Klemp implicates himself as well as improperly discusses open investigations. He’s also accused of bragging about his connections to high level school officials in order to intimidate officers whom he was investigating at the time.

Klemp’s involvement and potential misconduct during investigations could jeopardize all of the investigations he conducted while he was in charge of the CCSD Internal Affairs Bureau. That includes the case of James Lescinski, whose case I wrote about here on the CopBlock Network about a week ago. In addition, Detective Klemp was named in an earlier lawsuit over the cover-up of an incident involving a student who got drunk at a party thrown by CCSD police officers and then killed a teenage girl while driving home.

Via 8 News NOW, the local CBS affiliate in Las Vegas:

The purported transcripts of audio recordings with Detective Klemp, confirmed by the Clark County School District’s Police Union, reveal Klemp may have tried to influence investigations in his favor.

“Anytime we have allegations, we investigate the allegations, and because this is a personnel matter, we have to go in and look at it from all angles and determine the next course of action,” Skorkowsky said.

Along with the alleged partial transcript of a recorded conversation with Klemp, the complaint filed by the former CCSD Police lieutenant also contains allegations that Klemp openly discussed ongoing investigations.

It also states Klemp allegedly tried to intimidate officers under investigation. The complaint says Klemp boasted about being close to Dr. Mike Barton, a high-level administrator for the school district, along with other administrators…

Dr. Barton is not named in any other way in the complaint, but the allegations raise some concerns about the integrity of other investigations Klemp had a role in.

8 News NOW spoke with Jack Campbell, the attorney for another officer by phone. Campbell’s client was investigated by Klemp in a use of force case.

Campbell said his client, James Lescinski, was initially cleared of any wrongdoing by his superiors, but a secondary investigation by Klemp led to charges against his client.

“If this case they filed against Jimmy is the result of Detective Klemp’s activity that he talks about on the tape, then this whole prosecution is entirely suspect.”

Klemp’s attorney says the case is scheduled to go to trial in July.

CCSD Police Captain Ken Young told 8 News NOW it may take several days to put together a list of the investigations in which Klemp has participated.

In fact, the very true story that the LVMPD promoted a cop who was proven to have lied in order to illegally arrest someone in a clear violation of the Constitution and then put her in charge of their own internal affairs department is pretty indicative of the state of policing within Las Vegas.

It’s shocking that they have such a bad reputation and residents have such little trust in them.