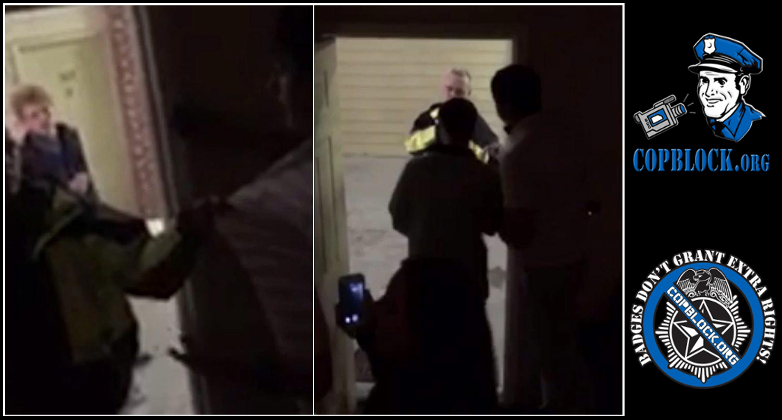 Three (unnamed) police officers in Tuscaloosa, Alabama have been suspended (with pay) after video surfaced of them assaulting and tazing a group of University of Alabama students. At the time of the attack, they were responding to a noise complaint, apparently involving loud music.

Multiple videos taken from different angles show the officers ordering one of the students out of an apartment, then pushing their way into the doorway and grabbing him when he asks why he is being arrested. He’s subsequently pulled outside, tazered, and then hit in the back by another cop with a baton.

Meanwhile, a female student inside the apartment, who can be heard complaining about the treatment of the first student, is told to “shut your fucking mouth” by one of the officers.

The video of the arrest shows an officer standing in the doorway of an apartment demanding to come inside before barking orders at one of the men to step outside.

He then snatched at the man’s shirt as a woman shouted “Don’t treat him like that” in protest. Another officer told that woman to “shut your f—ing mouth” as she cried hysterically during the arrests.

The officer standing at the doorway accused the man of grabbing his arm.

“You’re under arrest for harassment for grabbing my arm,” the officer bellowed. “I’m going to ask you one more time to get outside. Get outside now.” The man’s friends challenged the officer’s demands by asking if he was “being arrested or detained” and if so, the charges.

In another angle from outside the apartment, the officer barges through the doorway after someone inside the home tried to shut the door, prompting at least two more cops to storm in after him.

The officer then dragged the male resident outside, tackled him to the ground and deployed his stun gun on him. Another officer battered the man’s back with a baton. The footage shows a second man getting shoved to the ground beside him.

Tuscaloosa Police Chief Steve Anderson referred to the incident as a “black eye” for the city and police department. He is reportedly “deeply disturbed” by the video.

At a news conference on Monday, Chief Anderson pledged a full “investigation” into the officer’s actions and implored Tuscaloosa residents not to fear the police, stating:

“Do not be afraid of calling the Tuscaloosa Police Department. Do we always get it right? No, but there’s no need to fear us or fear our officers.”

Of course, Alabama is a state where cops get into fights with and then pepper spray each other. It’s also where a man was recently sexually assaulted at gunpoint by a police officer after being pulled over based on a noise complaint, which is the same reason the Heroes on this video showed up at the student’s apartment.

So, perhaps this might just be the latest reason for people to think twice about calling the police in Alabama. Plus, we all know quite well how these “full investigations” usually turn out once the media spotlight fades away.