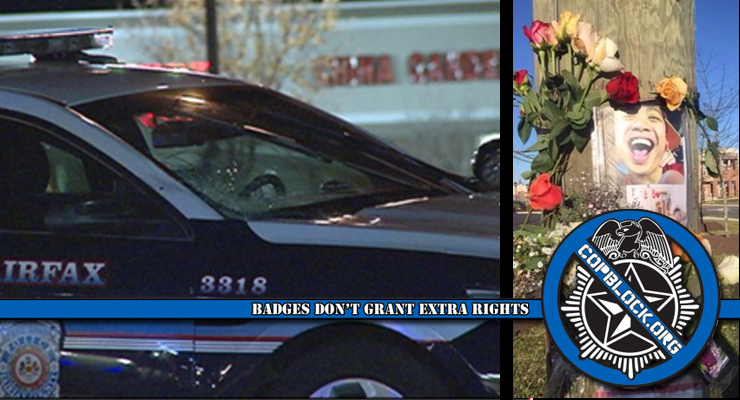 After more than two months, the investigation into the death of Jeffrey Ponce Aguilar, who was struck and killed by Fairfax County Police Officer Gregory Joseph Salino on April 2, has officially been closed. In a move surprising no one, no charges are being pursued. Salino has been restored to the official duties county taxpayers shell out $55,417 for him to do.

Was this a valid decision?  Perhaps. Perhaps not.

Law enforcement in general and the Fairfax County Police Department (and elected officials in the county) specifically have betrayed the public too many times for blind faith in the integrity of their internal investigations into their own actions.

There is dash cam footage of the incident, but it has not yet been provided to the public. FCPD’s announcement states:

“Colonel Roessler has directed staff from the Internal Affairs Bureau to meet with the family of the deceased, along with their legal counsel and provide them with an opportunity to view the in-car video of the crash prior to releasing the video to the community at a later date that has not yet been determined.”

Obviously, sensitivity should be shown to the family by allowing them the chance to see the video privately, rather than seeing it for the first time on the news. However, the statement gives the impression other factors are being considered here. FCPD leadership could easily have provided an adequate timeframe for the family to meet with them for this viewing while also setting a firm release date to the public. Or will this require another public shaming from a reporter at a community meeting, as it did for the release of the David Masters’ video?

The timing appears odd for several items in FCPD’s handling of this investigation:

Once again the public is left to wait and watch to see if county officials are still just blowing hot air when it comes to transparency. So far they get an ‘A’ for releasing the officer’s name, and two ‘F’s for not releasing the video or the report of the investigation. Final Grade: D

331
SHARES
FacebookTwitterGoogleRedditTumblr
DiggLinkedinStumbleuponMailPrint
You Can Support Cop Block by shoppping on Amazon using the banner below:
BANNERS ARE CLICKABLE