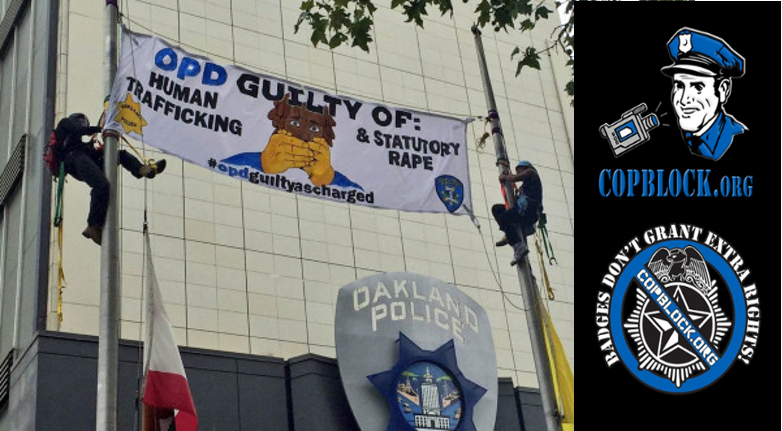 For the third time in just over a week, a police chief has either resigned or been fired in Oakland. On Friday, Oakland Police Assistant Chief Paul Figueroa, who had been appointed as acting chief just two days earlier, became the latest to step down.

The immediate reason for the firings/resignations is a scandal involving an underage prostitute that numerous members of the Oakland Police Department had sex with and tipped off about details of undercover stings, which was uncovered when one of the officers involved committed suicide and mentioned it in the note he left. (See “related posts” section below for previous coverage of this case on the CopBlock Network.)

Within the past week, it’s been reported that the investigation into that case has spread beyond just the Oakland police. According to the Las Vegas Sun, the Richmond Police Department has also started a review of their own officers’ potential involvement with Celeste Guap, who says she began working as a prostitute at the age of twelve.

“A second police department in the San Francisco Bay Area has launched an internal investigation into allegations of sexual misconduct by its officers.

The Richmond and Oakland departments are investigating after an 18-year-old woman said she had sexual relations with two dozen current and former officers in five cities during her stint as a sex worker. She told the East Bay Times recently that she was underage during encounters with three of the officers.

French said several ranking officers are being investigated for criminal contact with the woman or policy violations but she could not confirm the exact number of officers.”

The Contra Costa Sheriff’s Department also announced they had placed one of their deputies on leave as a result of an investigation into the sex scandal. So far, five Oakland cops have been suspended as a result and the San Francisco police Department has acknowledged that they are investigating at least two of their own officers. Oakland and other bay area police departments have faced serious allegations of misconduct and police brutality for years. The latest uptick in the current scandals also involve reports of racist text messages being sent amongst OPD police while on duty. The contents of those texts haven’t been revealed yet, but reportedly involve African American officers. Previously, San Francisco police officers were revealed to have sent similar messages to each other.

During the press conference (see video embedded below) where Assistant Chief Figueroa’s removal was announced, Oakland Mayor Libby Schaaf compared the conduct of the Oakland Police Department to a frat house and stated that it would not tolerate the misconduct and lack of accountability that has become commonplace within it.

City Administrator Sabrina Landreth has now been placed in charge in order to send a clear message about “how serious we are of not tolerating misconduct, unethical behavior,” and according to Mayor Schaaf, “root out what is clearly a toxic and macho culture.”

Also on Friday, activists held a demonstration in front of the Oakland Police headquarters. As part of that demonstration, participants scaled the flag poles at the entrance and erected a banner between them stating “OPD is guilty of human trafficking and statutory rape.”

Protesters also stated that the Oakland Police Department is rotten to the core, called for federal oversight of the department, and demanded change throughout the department. (See video embedded below.)