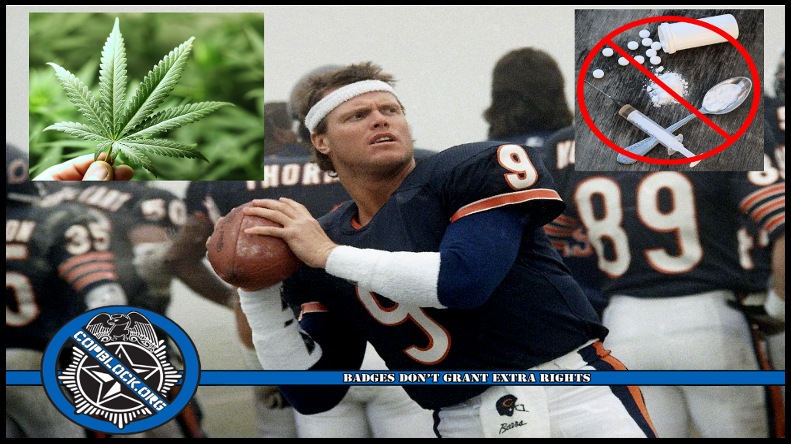 Jim McMahon, the Superbowl XX winning quarterback from the 1985 Chicago Bears, a team which is often considered one of the best all-time teams and arguably the best defense in the history of the NFL, has joined the long list of people advocating for the medical use of marijuana.

Currently, McMahon is battling symptoms attributed to chronic traumatic encephalopathy (CTE), such as early dementia, severe headaches, memory loss and depression, all of which have been attributed to the effects of multiple concussions and for obvious reasons are especially prevalent among people involved in contact sports.

Even in states in which medical marijuana has already been legalized, the National Football League prohibits its use among players. Anyone testing positive for marijuana use, regardless of local laws (even in Washington and Colorado, which both allow recreational use), are subject to punishments that increase with each instance.

McMahon made his statements advocating for marijuana as an alternative to opiates for pain management while appearing as part of a panel discussion by retired NFL players at the Cannabis World Congress and Business Expo. The panel was held at Manhattan’s Javits Convention Center.

Via the Sporting News:

McMahon, who is dealing with early dementia, severe headaches, memory loss and depression — all symptoms associated with too many concussions — believes he would be healthier now if he was allowed to use marijuana instead of pills during his playing career. Marijuana is an effective pain killer and less harmful than opiods, McMahon said.

“Hundreds of thousands of people are dying from [painkillers] and there’s not one case of people dying from the hemp plant,” McMahon said.

Britton added, “Juxtaposing my experiences with pharmaceutical drugs like Vicodin and Percocet, that made me angry and irritable, frustrated, didn’t get rid of any of the pain, made it difficult to sleep, increased my heart rate and made me feel crazy. On the other side of that there’s cannabis that helped me sleep, put me into a healing state of being where I was relieved from stress and anxiety as well as feeling the pain relief.”

Jackson, who appeared on an edition of HBO’s Real Sports that dealt with the same issue, added, “The owners of these teams are, by and large, wealthy men who are older and do not understand that this is a pretty innocuous substance.”

As is also mentioned in the Sporting News article, this offseason the Baltimore Ravens cut Eugene Monroe, a former first round pick who has campaigned publicly for the acceptance of medical marijuana in the NFL. Many people, including Monroe, have attributed that move to his strong advocacy for cannabis use, although the Ravens have denied that is the case. McMahon, who was known as much for his flamboyant attitude and defiance of arbitrary or silly rules as he was for his play on the field, is no stranger to alternative medical practices or controversy. In one of the more famous photos from the build up to Superbowl XX, he mooned a helicopter while wearing a headband that said “ACUPUNCTURE” on it.

He later explained that he was just showing the media where he had received treatment for an injury he had received in a game the previous week. (The headband derived from an incident earlier in the season where he was fined $5,000 for having an Adidas label on his head band during a game and subsequently wore a headband with “ROZELLE” written on it in reference to the league commissioner, who had fined him.) It’s silly and contradictory that the NFL approves the use of opiates and all kinds of other horrible pharmaceutical medications for players if they have a prescription (and sometimes without even having one), but prohibits the same medical rights for cannabis patients, even in locations where it can be legally prescribed by a doctor. In fact, it’s not at all unusual for players with lingering injuries to receive shots that numb the affected area in order to play during a game. Stories have even emerged of players receiving such shots in the locker room during a game in which they were injured.

So, it’s clearly not a case of the NFL being opposed to drug use in general or a concern for the safety or health of players. Their refusal to accept that playing in the NFL and improper care for concussions in the past increased the chances of players developing CTE alone is proof of that not being true.

The least they could do is give those players the option of using a safe and non-addictive option to treat the pain is inherent to the game. Being that there are different laws in the different cities which have NFL teams, there’s a small complication in the fact that some players would have access to legal medical marijuana while others wouldn’t because they state they live in still living in the dark ages.

However, in reality, all they would have to do is remove it from the list of drugs which they test for. Legally, they are not under any obligation to test for drugs, whether they are illegal or otherwise. Players certainly make enough money that they could set up residence during the offseason within the states that do allow its use for the next four or five years  or so until it’s made legal not just for medical use, but for recreational use as well, nationwide. (That writing’s on the wall in big, bold letters.)