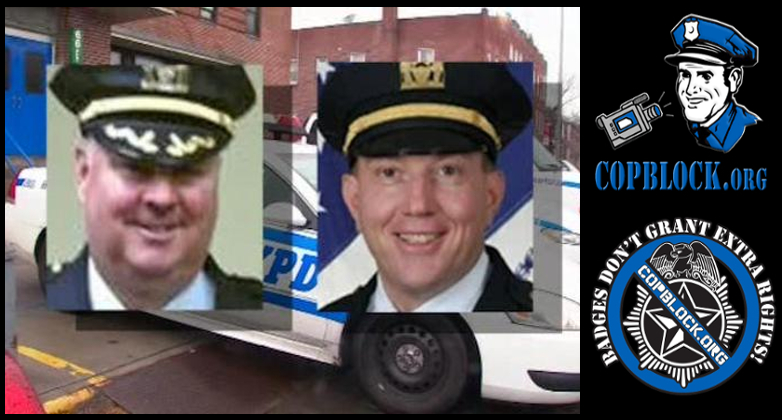 Deputy Chief Michael Harrington and  Deputy Inspector James Grant of the NYPD were among four people arrested today and charged with “conspiracy to commit honest services wire fraud” for accepting bribes as part of a city-wide bribery investigation. NYPD Sergeant David Villanueva, of the gun license bureau, was also arrested on charges of conspiring to commit bribery.

Harrington and Grant are accused of acting as a “private police force” for New York-area businessmen in exchange for bribes. Among other things, U.S. Attorney Preet Bharara has accused them of accepting over $100,000 worth of free flights, prostitutes, and expensive meals from Brooklyn businessman Jeremy Reichberg, who was also arrested, as payment for their services.

Via the ABC News:

In exchange for the bribes, Reichberg and others “got a private police force for themselves and their friends,” Bharara said at a news conference. “Effectively, they got ‘cops on call.'”

The four arrests follow months of revelations that have embarrassed the nation’s largest police department and put Mayor Bill de Blasio on the spot about his campaign financing. Both Reichberg and another businessman who has already pleaded guilty in the case contributed heavily to de Blasio’s campaign.

The mayor, a Democrat, hasn’t been implicated in any wrongdoing.

A criminal complaint accompanying the latest charges described how Reichberg exploited his connections within the police department to speed up gun license processing, make tickets disappear, get police escorts for him and his friends, get assistance from uniformed personnel to resolve personal disputes and boost security at religious sites and events.

Reichberg even managed to get his connections to shut down a lane of the Lincoln Tunnel connecting New Jersey and Manhattan and obtain a police escort for a businessman visiting the U.S., the complaint said.

In return, Reichberg and another businessman showered his favored police officials with well over $100,000 in benefits from 2012 to 2015, including prostitutes, home improvements and prime seats to sporting events, prosecutors said. Harrington and an unidentified police official let a businessman buy dinner once or twice a week for 18 months at expensive Manhattan restaurants, where bills ran $400 to $500, they said.

Among the other favors was $59,000 spent on a private jet in February 2013 that took Reichberg, an unidentified detective and Grant, commander of an Upper East Side precinct, to Las Vegas, the court papers said. The complaint said Reichberg and another businessman arranged for a prostitute to join the flight and spend the weekend with the group, staying in Grant’s luxury hotel room.

According to the complaint, the prostitute told law enforcement agents that Grant and others “took advantage of her services” during the trip.

The court papers also alleged Reichberg and an unidentified real estate businessman who has pleaded guilty and is cooperating with authorities wore elf hats as they drove to Grant’s Staten Island home on Christmas 2013 to give Grant a video game system for his children and a $1,000 piece of jewelry for his wife. Authorities said they captured Grant on a recorded telephone call a year later grumbling that his two “elves” did not come for Christmas that year.

The arrests stem from an ongoing corruption investigation that has already led to numerous high ranking NYPD Heroes putting in for retirement hoping to avoid being held responsible for their involvement.