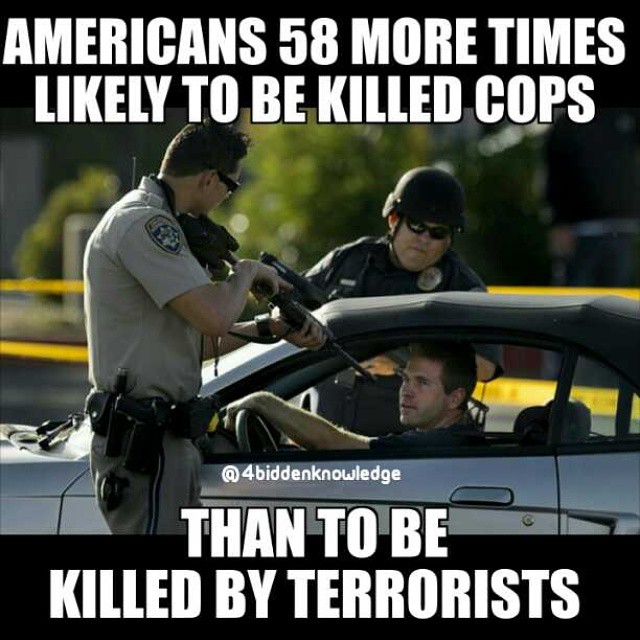 *Written by Jake McCauley and originally published at The Odyssey Online*

Are police officers terrorists? How could somebody even ask such a thing?

A police officer is a person whose job is to enforce laws, investigate crimes, and make arrests.

So, let’s think for a second. What are laws? Are they rules we all agreed on? Are you personally asked permission every time a law is proposed? Do they require your consent to enforce a law onto you? Or are they rules that somebody else wrote in order to achieve a political goal, rules you didn’t have any say in? Rules legislated by people that don’t actually own the land they are claiming their rules should apply to? Maybe you had a vote in which of the presented politicians are making these rules, so you voted for the more charmingperson that you believed would be a little more gentle about the opinions they decide should be forced onto you, so you had some trace of choice in who is making the rules, but you usually had no choice in what the actual rules will be, or whether or not somebody gets to force their rules on you in the first place. Every law indicates the threat of punishment if you disobey. So from an objective standpoint, laws are threats that you did not agree to, but are now being enforced, by police, onto you.

So what is it to enforce laws? What does that look like?

Do police officers just walk up to people breaking laws and politely ask you to stop, or, do they use violence and the threat of violence, to take you out of our life and lock you away as punishment for breaking the rules that somebody else wrote?

Even the cops themselves would agree that police officers are required to use violence, like forcefully putting people in handcuffs, an act of violence, in order to do their job. That’s what their weapons are for. Cops generally don’t say “excuse me, can I put you in jail? It’s your decision”. Cops use their shiny badges – which many people believe give them extra rights – and often their weapons, to say “you’re not in charge of you anymore, you’re coming with me, and living in a concrete cell for as long as some judge decides you should, whether you like it or not. If you try to stop me from kidnapping you, I will shoot you dead. Can’t do the time don’t do the crime”

While most cops won’t say it quite so directly and bluntly, that is the underlying concept of every single arrest. Give up your freedom or give up your life. If you didn’t want to be kidnapped, you should have obeyed the politicians. They are your masters and so am I.

A lot of police departments around the U.S. are pressed with quotas – minimum numbers of arrests made and tickets issued – so they can increase and maintain their department funding. That means that they’re actually REQUIRED by their bosses to kidnap and rob a certain minimum number of people. Factor in that many of the prisons are for-profit, meaning the owners make boatloads of money per prisoner, so they pay their politician and police department friends to lock up as many people as possible, an it’s NO WONDER almost 90% of Americans in prison right now are in there for victimless “crimes”.

In places there aren’t set quotas, there’s generally still a barrage of political pressure for the police departments to arrest and ticket as many people as they can so they can show numbers that demonstrate “efficiency”. A cop’s job is not to “protect and serve”, it is to put you in a cage or take your money. Some of them might be actually nice people that joined because they thought they’d be stopping violence instead of instigating it, in the same way a lot of the Nazi troops probably thought they were just defending their country, but a fat chunk of the murders and violence in America are directly caused by the laws that the cops enforce. Laws like drug bans. You don’t see the Walgreens pharmacists doing a drive-by on Rite-Aid and killing 4 people, that’s pretty exclusive to the ILLEGAL drug industry, being kept hostile by the innate risk of a cage that comes with the game. You generally don’t see prostitutes being murdered in places where prostitution is legal. Not so many people are getting robbed slaughtered in places where the cops aren’t creating easy targets for robbers by arresting everybody who carries a gun without special permission.

So, literally speaking, police officers are people whose job is to enforce the agendas of politicians.

Their jobs require using violence and intimidation in the pursuit of political aims.

Now, in all practicality, people don’t usually associate the word “terrorism” with “guys that kidnap and steal”, people tend to think of “terrorists” as “a bunch of people that murder a bunch of people.”

So where do cops stack up on the terrorism scale as far as murder goes?

The Bureau of Justice Statistics estimates an average of 930 Americans per year are shot by police officers. All police departments in the U.S. train incoming officers never to shoot to wound; always to shoot to kill. If you try to defend yourself from the police, they’re allowed and encouraged to end your life.

According to The Guardian, in reference to FBI statistics, you’re at least 55 times more likely to be killed by police than by non-government terrorists – that applies to all U.S. citizens, including ones stationed overseas in war zones.

Whenever the police stop you, they are threatening to kill you. They make it very clear every day that the people who refuse to stop, refuse to be kidnapped, or refuse to be bullied into submission – are liable to be shot. When you’re pulled over, that siren is saying “stop your car or a bunch more of my gang mates will join me in chasing you down and fighting you – to the death if we choose – in an effort to kidnap you.”

Should’ve got your tags renewed.

[Editor’s Note: The video below is a School House Rock parody that highlights how pirates and emperors are really the same thing. Which is something that could be said for terrorist and police.]