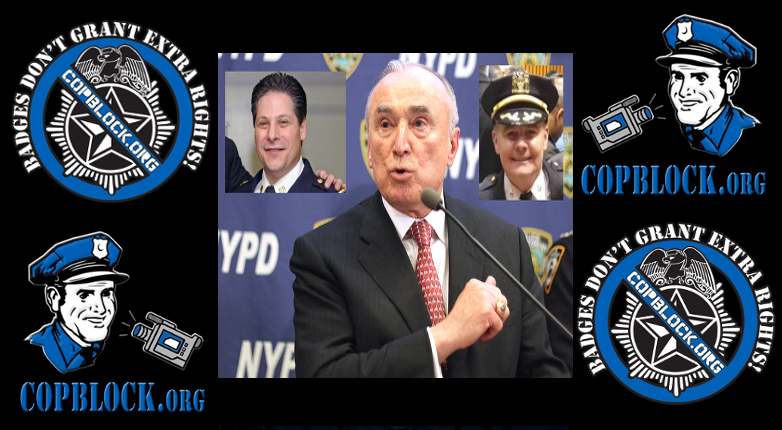 NYPD Commisioner Bill Bratton reinstated two of the high ranking New York police officers that had been suspended as part of a wide ranging corruption and bribery probe that includes politicians, including Mayor Bill de Blasio, and cops across the city.

The reason they were reinstated isn’t because they were cleared of involvement in illegal activities. Rather it was to allow them to retire, thereby keeping their pensions and other benefits.

As has already been reported several times here at the CopBlock Network, several high ranking NYPD cops were recently charged criminally in connection to the investigation, while numerous others have fled the force via early retirements in an effort to avoid charges.

One of the most coveted benefits that those NYPD officials attempting to run out the door before it closes by yelling, “you can’t fire me, I quit” will retain is known as a “Good Guy Letter.” Essentially, this amounts to them getting an honorable discharge from the World’s Seventh Largest Army, rather than having the black mark of having been fired on their record.

The move — which ensures the high-ranking cops will get highly coveted, official references from the NYPD — came as Bratton is trying to oust all scandal-tainted brass by the end of the month, sources said Tuesday.

Inspector Peter DeBlasio, operations coordinator for Patrol Borough Brooklyn South, was relieved of his duties on May 18 for the same reason.

But Sprague and DeBlasio were both technically returned to active duty as part of a deal to force their retirements, sources said.

DeBlasio refused to retire while on modified duty because it would have kept him from receiving an NYPD “Good Guy letter,” sources said.

The letter lets ex-cops easily obtain a full-carry pistol permit and is a boon to future employment.

A fourth cop, Officer David Ochetal, secretly pleaded guilty earlier and is cooperating with authorities, according to the Manhattan US Attorney’s office.

Bratton agreed to DeBlasio’s demand to be removed from modified duty and DeBlasio put in his retirement papers early last week, sources said.

Sprague was a particular embarrassment because Bratton hand-picked him to head the NYPD’s Force Investigation Division, sources said.

The wording is sorta of ironic though, since it’s almost the same wording used by Ray Liotta when he played former mobster Henry Hill in “GoodFellas” to describe how the Mafia worked:

“You know, we always called each other Good Fellas. Like you said to, uh, somebody, ‘You’re gonna like this guy. He’s all right. He’s a good fella. He’s one of us…’