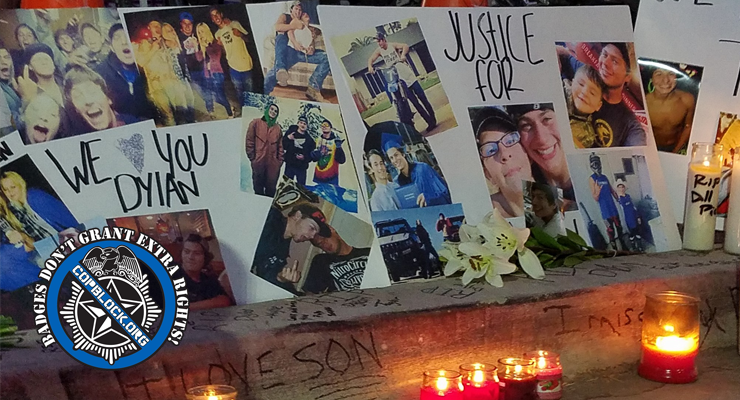 Around 3:20pm on Saturday Fresno police were responding to a call about a person walking with a rifle. During their manhunt, they noticed Dylan Noble burning out in his pickup truck and pulled him over. When Dylan pulled over in the area of Shields and Armstrong, investigators say he didn’t comply with officers’ demands. Deputy Chief Pat Farmer said officers felt the man was reaching for a weapon when they shot him, but no weapon was found at the scene.

“The subject was told to show his hands. The solo occupant of the pickup truck would show the officers one hand at a time and kept one hand hidden during the contact,” said Farmer.  “The subject made a statement that he hated his life and made affirmative movement to the small of his back at which time he was shot several times by officers at the scene.”

Hundreds gathered for a vigil held by friends and family on Sunday at the Chevron parking lot where the fatal encounter happened.

The vigil escalated fairly quickly into a street demonstration leading to a standoff with police.

Makayla Trice says “everything they have said about Dylan being ‘suicidal’ is a complete LIE, which has been confirmed by everyone who was with him in his final hours leading up to his murder.”

Supporters have started a petition to the Fresno Superior Court to release the body camera footage.

There is also a fundraising campaign: Dylan Noble’s Campaign for Justice

This article was originally published at FresnoPeople’sMedia.com