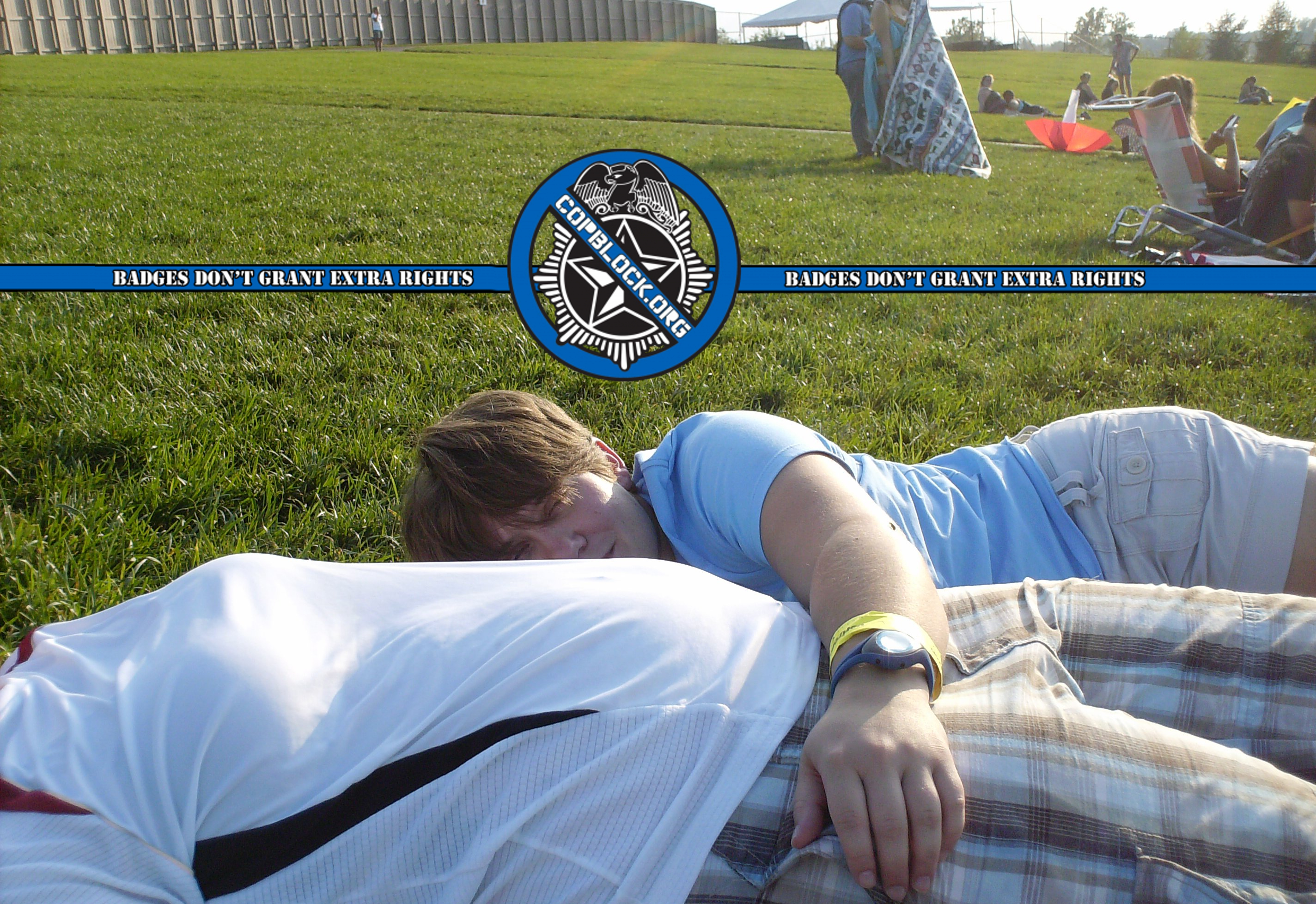 The following post was shared with the CopBlock Network anonymously, via the Copblock.org Submissions Page. This post discusses claims about the behavior of a Lieutenant with the Noblesville Police Department and concerns that they have regarding that behavior.

Personally, on a basic level I don’t particularly care if Lt. Trump (or anyone else) gets black-out drunk every night of the week and twice on Sundays (or some other random day). It certainly wouldn’t be the healthiest choice of lifestyles and would probably lead to a lot of embarrassment for them in their private lives. However, so long as they weren’t harming anyone else, that’s something I don’t need to be involved in. I don’t really care about the “higher standards” for cops or how well they are representing the department’s image.

The real issue is the hypocrisy if the claims are true. There’s very little doubt that someone who is a lieutenant has arrested people for drinking related offenses, such as DUI’s, being drunk in public, etc. and in all likelihood still does on a fairly regular basis. So, when they are running around doing those same things that they arrest others for, they shouldn’t have the option of pulling out their Shiny Badge and slurring the names of a couple other cops to get them off the hook.

(Note: The submission below has been posted in its original form and no edits to the original text were made, except for spelling, typos, grammar and that things of that sort. Some links also may have been added within the text and images have been added. Otherwise, it is being posted as received.)

We have become aware of concerning issues of integrity with a supervisor employed with the Noblesville Police Department. Lieutenant Shannon Trump with the Noblesville Police Department maintains the attitude that she is above the law and because she has a badge, the laws that she has sworn to uphold do not apply to her. As you can see in the pictures, Lieutenant Trump is highly intoxicated and passed out in the lawn area of Klipsch music center. Lieutenant Trump was instructed by security to discard her open container due to the fact that tailgating and the consumption of alcoholic beverages on the outside grounds of the music center was strictly prohibited. Rather than complying with the orders given by security, Lt. Trump became unruly and belligerent. It was during this time that lieutenant Trump displayed her badge and identified herself as an officer with the Noblesville Police Department. She began “name dropping”, identifying additional officers that she believed were working part-time security at this particular venue.

She stated that she was a supervisor with the Noblesville Police Department and that these officers did not have the authority to tell her what to do. When Lt. Trump failed to comply with the instructions given by the security supervisor, he radio’d for additional security officers, as well as law enforcement, to respond to the area for assistance. It was at that time that friends who had accompanied Lt. Trump to the venue stepped in and prevented the matter from escalating any further. The incident was deescalated when Lieutenant Trumps friends suggested that she comply and encouraged her to relocate to the main gates to enjoy the concert as planned.

After entering the main gates, Lieutenant Trump purchased additional alcoholic beverages and continued to consume them at an accelerated rate. At the time that these photographs were taken of Lieutenant Trump, the actual concert that she had purchased tickets for hadn’t even begun. Lieutenant Trump had attracted so much negative attention to herself while in this intoxicated state that the patrons around her began to express concern. She was unable to stand on her own and appeared to have slipped in and out of consciousness while laying on the lawn area outside of the Klipsch

As the concerns of patrons grew for the safety and welfare of Lieutenant Trump, reports were made to security. It was around this time that security officers then re-approached Lieutenant Trump and her significant other who is tending to her at that time. Noting that she was extremely intoxicated, Lt Trumps safety became the priority of the security personnel. Those who had accompanied Lieutenant Trump were ordered by security and law enforcement to remove her from the premises due the fact that she was in a public place in a state of intoxication. Lieutenant Trump’s speech was slurred to the point to where she could not be understood and she was physically unable to walk by herself as she was removed from the property. She was incoherent and her inebriated state and had to be assisted by others due to the fact that her balance was so unsteady.

This is not how a law-enforcement officer should act or represent themselves in a public setting regardless as to whether they are off duty or not. Lieutenant Trump’s behavior was not only embarrassing, but extremely inappropriate and unprofessional towards not only her, but to her own department. Lt Trump failed to realize that law-enforcement officers are held to a higher standard and not only have a responsibility to uphold the laws, but to abide by them as well. While Lt. Trump is an adult who can legally consume alcoholic beverages, she failed to realize that she represents a law-enforcement agency both on and off duty. Lt Trump’s behavior was irresponsible and reckless, as well as extremely unprofessional.

Not Her First Drunken Rodeo

We have confirmed statements from a reliable source that this is not the first time that Lieutenant Trump has become a liability and a danger to herself and others due to her consumption of alcoholic beverages. Our source has informed us that they have knowledge and have witnessed her operating her police vehicle after consuming alcoholic beverages and also while being in an intoxicated state. Another reliable source has provided us with text messages from Lt. Trump stating that she was “still drunk from the night before.” These messages were sent while Lt Trump was assigned to a law enforcement detail where she was responsible for the safety of the participants/spectators at this event and had a responsibility towards the supervision of additional officers who had been assigned this same detail.

It is clear that Lieutenant Trump has the attitude that she is above the law and that the same laws she has sworn to uphold, don’t apply to her. Lt. Trump has during her career made a number of arrests on the subjects who were intoxicated in a public place and has also made arrests for driving under the influence. Yet, when Lt Trump had violated these same laws, she has flashed her badge, dropped a few names and assumed that just because she’s a police officer, her badge will provide her with extra rights. You would think that law enforcement agencies, and their officers would have learned from the mistakes made from the David Bisard accident. This officer, who had been operating his police vehicle while intoxicated caused and accident that claimed the life of Eric Wells and seriously injured Kurt Weekly and Mary Mills. Clearly, that’s the least of Noblesville PD Lieutenant Shannon Trump’s concerns, that is, so long as she has her badge to hide behind.

We have also obtained additional information and documents confirming that Lieutenant Trump committed fraud during the process of applying for the FBI national Academy. Lieutenant Trump during the application portion of the process was to submit medical/physical information that was to be signed and authorized by a certified medical professional. Lt Trump forged the name of an acquaintance who she knew was not certified to confirm this information to be true or accurate. Adding to this particular case, Lt Trump committed not only a felony, but a federal offense in order to be accepted into the FBI national Academy. This is not how our law enforcement officers are to act or behave. Lt Trump has represented her department in the most unprofessional and embarrassing ways possible. She has not only embarrassed her own department, but she has violated state, as well as federal laws.

This is not a role model that we want for our children, nor is she someone that we would want to respond in the case that we have an emergency that would require police assistance. We could care less what these officers do when they are off duty and it is their right if they choose to consume alcoholic beverages. It becomes an issue for the public though when these law enforcement officers assume that it is their right to endanger the safety of others or expect special treatment when they flash their badges. It is this type of abuse that shows the double standard between the average citizen and a police officer. These law-enforcement officers need to be held accountable for their actions and the crimes that they commit and are not entitled to special treatment for the crimes that they commit.