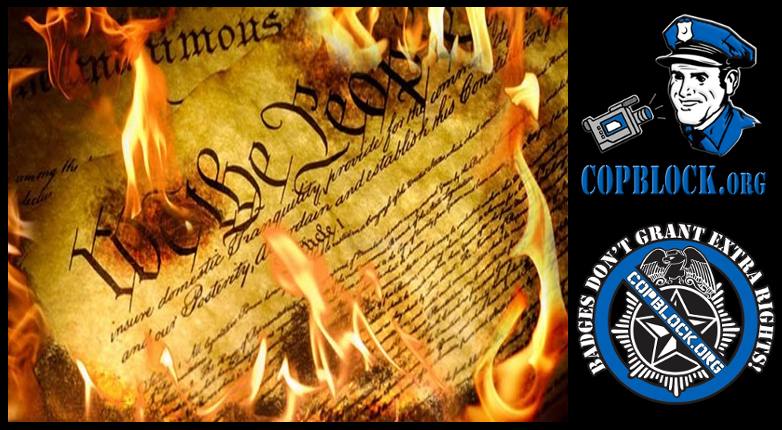 This post was written by Kelly Vee and originally published at the Center For a Stateless Society (C4SS) under the title “Supreme Court Ruling is Admissible Evidence of Police State.” Posts and other content you think are worth sharing with the CopBlock Network can be sent in to us via the CopBlock.org Submissions Page.

(Note: This has been posted in its original form and no edits to the original text were made. Some links may have been added within the text and images have been added. In addition, the conclusions expressed within this initial introductory summary represent my own interpretation of what is being stated within Kelly Vee’s own writings.)

In the post below, Kelly Vee discusses the recent Supreme Court ruling in the case of Utah v. Strieff which allowed the inclusion of evidence found during an illegal search to be admitted if it was subsequently found that a warrant existed for someone with the name of the person that had been illegally searched.

Although this has been (rightfully) decried as an invalidation of the Fourth Amendment, essentially encouraging police to profile and illegally detain people in the hopes that they will discover a warrant after the fact. Vee points out why such a decision should not actually be surprising, given the nature and true purpose of the court system.

On Monday, June 20, the U.S. Supreme Court ruled that evidence police find during illegal stops is admissible in court. As long as the officer can find some outstanding warrant in your name, the court will excuse the officer’s illegal stop. The Supreme Court’s decision would be disappointing if you expected the Supreme Court to do anything other than serve itself.

Monday’s ruling seems to contradict Mapp v. Ohio, or at least seriously expands the definition of a legal search. In Mapp v. Ohio (1961), the Supreme Court ruled that all evidence obtained through illegal search and seizure in violation of the Fourth Amendment of the Constitution was inadmissible in court. In her scathing dissenting opinion, Justice Sotomayor wrote, “This case allows the police to stop you on the street, demand your identification, and check it for outstanding traffic warrants—even if you are doing nothing wrong.”

The scope of this ruling is not limited to some small subset of violent criminals. Millions of Americans have outstanding arrest warrants. That speeding ticket you forgot to pay is enough to excuse an officer that stops you illegally. Anything the officer finds is admissible in court, as long as they can find a valid (unrelated) warrant with your name on it. In a country where cops murder and get away with it, corruption charges rarely follow through, and the justice system runs rampant with racial (and other) discrimination, one of our few remaining defenses against police misconduct has just been whitewashed to the point of emptiness.

It’s not hard to imagine how this newfound police power will be abused. In the country that incarcerates more people per capita than anywhere else in the world, ahead of countries such as Turkmenistan, Cuba, and El Salvador, millions more wait to be thrown behind bars. The Supreme Court’s ruling expedites the process of putting people in cages by making it even easier for cops to search and arrest people without oversight. All it takes is an unpaid traffic ticket, and no probable cause is necessary for the police to search someone, using anything they find in court.

Police, rarely held accountable for misconduct, now have even less motivation to behave. Even if their stop is illegal and without cause, the evidence they find will work in their favor in court.

The Police State, the Prison State, and the Court System are all a part of the same twisted, monopolized justice system run with perverse incentives at the expense of its constituents. Police abuse their power, the Court affirms their mistakes, and people end up behind bars. Rather than express righteous shock at the recent Court’s decision, we should recognize the natural progression of the State and oppose it at its core. Power seeks power, but if more people understand the root of the problem, we can fight back.