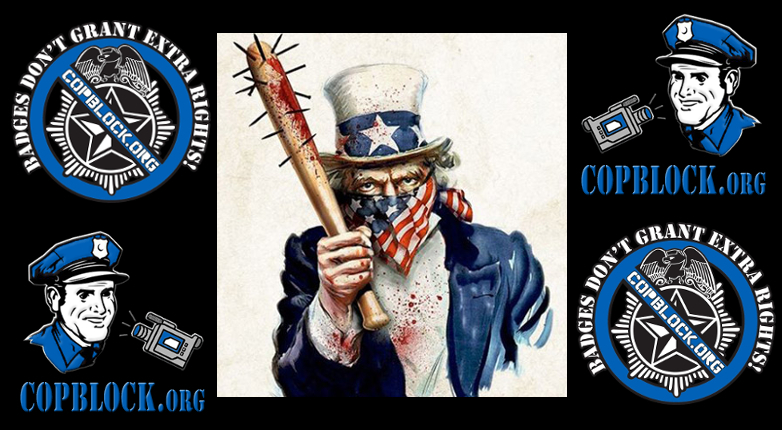 This post was written by Kevin Carson and originally published at the Center For a Stateless Society (C4SS) under the title “A Lazy Anti-Anarchist Meme That Needs to be Purged.” Posts and other content you think are worth sharing with the CopBlock Network can be sent in to us via the CopBlock.org Submissions Page.

(Note: This has been posted in its original form and no edits to the original text were made. Some links may have been added within the text and images have been added. In addition, the conclusions expressed within this initial introductory summary represent my own interpretation of what is being stated within Kevin’s writings.)

In the post below, Kevin discusses the latest “Purge” film, a series in which the premise consists of one night per year being designated as a “free for all” where no laws are enforced and those who would normally prevent criminals from victimizing the general population take the night off. In doing so, he argues that things would likely go down very differently than what is depicted in these movies.

In reality, one of the worst aspects of the State are the restrictions those who control and benefit from it place on the general population’s ability to defend themselves. The most obvious reason for doing so is that it eliminates the general public’s ability to threaten that control. (As an illustration of that, attacks on high ranking officials are still prohibited even during the Purge.) The somewhat less obvious reason behind it is that when your options for self defense are limited then your dependence on the State and the protections they offer increases.

The net effect however, regardless of the motivation behind it, is that most people are less safe because they are forced to wait for the police to show up, rather than having an option to defend them self directly and immediately. That is even more so in the (many) cases when their assailant is a member of the police force.

A Lazy Anti-Anarchist Meme That Needs to be Purged

I see there’s another upcoming installment in The Purge series of films — a franchise whose basic premise is that there’s one night each year in which all crime is legal and police and rescue services are unavailable, setting the scene for lots of dramatic action footage of terrified people barricading themselves in their houses against marauding psychopaths.

Next to Somalia (“If you hate government so much, you must think Somalia is a paradise!”), The Purge is probably liberal goo-goos’ favorite thing to throw in anarchists’ faces. They’re the same idjits who say “but what about the rooaaaads?” and like to quote Justice Holmes on taxes as “the price we pay for civilization” (of course the civilization Holmes was so proud of included forced sterilization of “inferior races” and throwing people in prison for opposing WWI).

The basic idea, in equating a stateless society with The Purge, is that without the state to compel cooperation and prohibit violent crime, society would revert to a Hobbesian nightmare of mayhem and terror.

Of course the basic assumptions about human nature shared by both critics of anarchism, and the movie they like to throw in our faces, are ridiculous. Both the creators of The Purge and the people who treat it as an abject lesson in anarchy assume, first of all, that the only thing restraining people from murder and violent acts is the fact that they’re illegal and they might be punished by the state. And they assume that people are incapable of helping or cooperating with one another absent the state to force them to do so.

In the real world, the vast majority of people — probably close to 99%, if not more — don’t need fear of punishment to prevent them from committing murder. They don’t go around murdering people simply because it’s something they consider unacceptable behavior. And of the tiny minority of people who don’t refrain from murder and violence because of their own internal constraints, most are deterred most of the time by the significant risk entailed in the act itself. Even for someone with no moral compunction against harming others, in most cases it’s simply more trouble and risk than it’s worth to attack people who are capable of fighting back.

The biggest suspension of belief involved in The Purge, even bigger than the basic premise itself, is the relative dearth of precautionary measures taken in anticipation of the Purge. There’s a market for home security systems (albeit of limited effectiveness against large-scale assault) for rich people. But people of ordinary means, and especially the destitute and working poor in urban neighborhoods, are considered defenseless and prime targets for attack. None of the marauding gangs seem to consider that the people whose homes they’re assailing are equally capable of acquiring guns and explosives, cooperating with their neighbors, and fighting back in some extremely nasty ways (which are also legal that night). Considering the lack of certain knowledge of what defensive preparations even a poor person might have undertaken, and the risk entailed in even a large-scale assault on their home, it’s hard to imagine what such a household would have of sufficient value to compensate that risk.

In the real world, if people knew a year in advance that a night was coming in which murder was legal and no cops would be available, it’s a fair guess that would be a major topic both for household planning and for discussion with the neighbors long before the date arrived. In short, Purge night would be the single most dangerous night of the year — not for peaceful people staying at home — but for would-be murderers, robbers and rapists planning to invade a house.

The assumptions behind The Purge are the same as the assumptions of those who see The Purge as a critique of anarchism: ordinary people are incapable of peacefully cooperating in their own interest, and force is the only thing that holds society together.