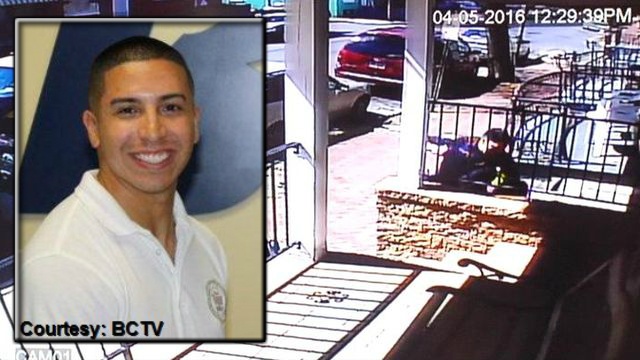 All charges against Officer Santiago-DeJesus of the Reading Police Department were dismissed and the officer walked out of the courtroom without any repercussions for slugging Marcelina Cintron-Garcia in the face, in May. A home surveillance camera captured the incident on camera, but Allan Sodomsky, Officer Santiago-DeJesus’s attorney, was able to convince the judge that he was just a good guy trying to do a hard job.

“Ofc. Santiago is a good guy just trying to do his job, and if you comply with requests of police officers on the street, we have a place to challenge… that is our courthouse,” Sodomsky said.

However the actual events would prove that officer Santiago-DeJesus is just a power mongering thug, incapable of controlling his emotions.

Officer Santiago-DeJesus not only initiated the traffic stop under false pretenses, he proceeded to order the Marcelina Cintron-Garcia and her passenger out of the vehicle for recording him during the stop. Unbeknownst to Santiago-DeJesus, he was also being recorded on a home surveillance system.

During the investigation, which included interviews and a review of surveillance video, it was determined by the DA’s office:

The driver, Cintron-Garcia, 30, was jailed for three days on charges of aggravated and simple assault, harassment, resisting arrest, disorderly conduct and other offenses. The passenger, Rodriguez, 24, was charged with disorderly conduct and resisting arrest, but he remained free on unsecured bail. All of The charges were subsequently dropped making the exoneration of officer Santiago-DeJesus even more questionable.

If you believe that behavior such as this is inappropriate for anyone, let alone an agent acting on behalf of the state. Please consider dropping the Reading Police Department a note on their Facebook page voicing your displeasure for this officer’s actions and the subsequent lack of punishment.

If you are so inclined, also consider calling and asking to speak with the chief. Demand that  Officer Santiago-DeJesus be dismissed from the force for his actions. Just because punishment was absent under the law does not mean that he should be allowed to continue as a police officer.