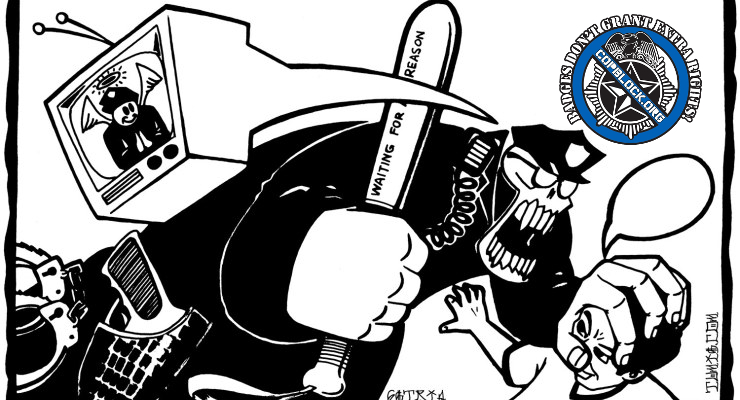 Tragedy struck a family near Wauwatosa Wisconsin, after one of the suburb’s officers gunned down a man in his car. As expected, Wauwatosa PD is quite tight lipped regarding the incident, and isn’t even investigating it. Instead, the department of around 94 officers passed the killing off to the neighboring Milwaukee Police Department. With Tosa PD refusing to hold a press conference, will transparency ever meet this latest killing?

At around 3am, an unidentified Wauwatosa officer arrived at Madison Park, along Tosa’s northern border. Police claim the officer approached a car to investigate its “suspicious” occupant. The officer allegedly then noticed a weapon and, fearing for their safety, fired their own. The African American male was later identified as 25 year old Jay Anderson, declared dead upon reaching a hospital.

Tosa PD Chief Barry Weber offered reporters vague initial statements, promising more later. Weber’s promises proved empty, as no press conference was held for WPD to explain themselves. Speaking to reporters at the scene, Weber made a rather interesting confession. According to the Milwaukee Journal Sentinel, Weber didn’t talk to the officer, and didn’t know why they were afraid.

This brings into question where Weber got his original narrative, further thickening the killing’s shroud. Although WPD released Anderson’s name, Milwaukee PD will investigate the incident. Before finally releasing his identity, however, WPD ducked and dodged MJS inquiries. If you find all these finer details unusual, you’re not alone. Anderson’s family particularly is crying out for answers regarding the shooting, and what led up to it.

To friends and loved ones, Jay Anderson was a father, sibling, and was engaged. Anderson’s fiancé’ recalls how he “showed my son how to play basketball”, before the school year. Starkeisha Delarosa says Jay even taught her child to “dribble a ball, catch a football”, and even could potty train. “He was a good daddy”, she says, calling his death “unreal”, FOX6 reports.

“We haven’t really heard anything”, says Linda Anderson, Jay’s mother, “and I just want to know what happened to my son.” Jay’s father, who shares his name, says “I want to get to the bottom of this.” Mr. Anderson called his son a respectable, loveable person who “shouldn’t be dead.” Although Tosa PD is holding public information, Anderson’s community is beginning to rally behind the grieving family and widow. This includes a chapter of the Black Panthers, who are demanding that “this investigation is clear, honest, and thorough.”

Here’s why such an investigation may prove difficult to obtain without large scale media, activist, and public attention. Let’s start with the detail of passing the investigation off to MPD. Wisconsin state law mandates that police shootings be investigated by an agency outside of that department.

For Wauwatosa PD, what sounds good on paper translates into them passing investigations off to their big brother. This is what happened after last years shooting of a man with a sword in Wauwatosa’s suburban Glencoe area. Milwaukee PD itself, however, is the subject of a federal practices probe by the Department of Justice.

Unlike many departments, which had probes forced upon them, MPD Chief ED Flynn volunteered his force. The decision culminated in a massive public forum, where countless residents wronged by MPD voiced outrage. Day’s later, it was revealed that MPD hid it’s own illegal use of Stingray technology from courts and judges. Stingrays collect cell phone data and user information by fronting as cell phone towers, and are linked to numerous questionable police practices.

From late 2012 until mid-2014, WPD conducted a large scale effort to clear out woodland forts used by local teens. Officers were initially drawn by reports of drug use and partying in the forts, and proceeded to seek them out and remove them. It didn’t take long, however, for scores of consistent accounts of officer misconduct to surface.

Many teens who felt targeted by the department attested to ominous surveillance, random and illegal searches, and intimidation as just a few trademarks. Officers allegedly set fire to several forts in broad daylight as teens fled and threatened others, amongst the many forms of malpractice. The operation is remembered through the documentary Speak Friend And Enter, as well as subsequent articles. Speak Friend And Enter was produced during and then shortly after the operation, giving its targets a voice.

While Wauwatosa Now published some individual reports of teen arrests, the operation was largely left untouched. At the time, Wauwatosa Now was engaged with a tug-of-war with WPD for its reports. Following the activation of a report redaction policy, WPD starved Tosa’s main outlet of basic information. At one point, reports ceased all together, with WPD claiming it didn’t have the “manpower” to produce them.

Simultaneously, WPD ceased publishing it’s larger, more detailed annual reports on Tosa’s city webpage. Annual reports from 2004-2011 remained online until sometime in 2015, when they too were removed for unknown reasons. CopBlock’s FOIA requests, which ultimately revealed possible Stingray use, brought them back. Such a history of attempting to tightly control department information makes WPD’s handling of Anderson’s killing disturbing, yet unsurprising.

Chief Barry Weber has even found time in the past to respond to comics created by Tosa students. When Tosa East Student Dan Moore published a controversial comic in the school paper, Weber mobilized against it. The comic show’s a Wauwatosa officer stopping a black driver asking, “you realize you’re black driving in Wauwatosa right?”

Moore said he’d noticed the pattern while living in the suburb, feeling “someone should comment on that frequency.” Weber called the comic “unfair”, and said it could “cause problems when, in fact, there are none”. In the piece, Weber claims to be unsure how widespread racist feelings were amongst officers. Whereas Weber responded to Moore’s high school comic some years ago, his department can’t hold a press conference regarding a shooting.

Without larger scale media, community, and activist attention, Jay Anderson’s death may be robbed of closure. This department is remarkable secretive, and has developed an effective P.R. apparatus in recent years. Annually, events such as Coffee With A Cop, held days before the killing, are touted as evidence of a transparent department. These, however, amount to empty media events and public appeasement when faced with such a history. Best case scenario, the handling of Anderson’s investigation will force WPD into transparency. Worst case scenario, his death gets buried with him, Wauwatosa’s crackdown, and everything else critical of Tosa PD.