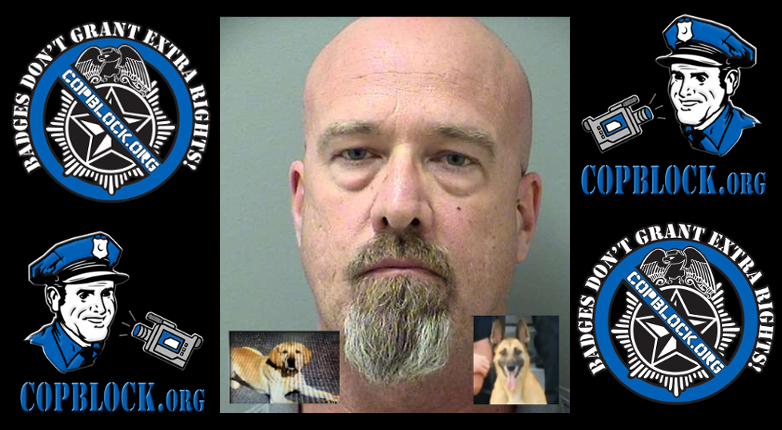 On June 10th, Lieutenant Daniel Peabody of the Cherokee County Marshal’s Office left his K-9 to die in a hot car, later claiming to have forgotten about him. Inca, the dog who had been assigned to Peabody by the Cherokee Schools police, died from a heat stroke as a result.

The car that the dog had been left in was reportedly not even intended to be used as a K-9 unit. Unlike the cars that typically are used to transport police dogs, this car had no alarm system installed to warn of excessive heat and also didn’t have a kennel installed to contain the dog within the vehicle. Lt. Peabody was subsequently placed under investigation and forced to resign over the incident.

Now it has come to light that during the investigation of Inca’s death it was revealed Peabody had also shot a previous dog, which had been assigned to him in 2012. Apparently, at the time that dog was killed no investigation was made into its cause of death and Peabody’s claim that it had choked on a toy was just accepted.

He has now been arrested in relation to both of the dogs’ deaths on charges of animal cruelty and lying to investigators.

It was the investigation into Inca’s death that produced evidence suggesting Peabody shot and killed the other dog, Cherokee marshal’s officials said Wednesday.

That dog, a yellow lab named named Dale, was assigned to Peabody from 2007 to 2012 when he lived in Paulding County.

“Peabody initially claimed Dale’s death was accidental due to Dale choking on a toy,” the marshal’s office said in a statement. “However, the investigation yielded evidence that Dale was in fact shot and killed.”

On Monday, investigators found remains thought to be those of a dog at Peabody’s former home in Paulding while executing a search warrant. Those remains are being analyzed by a forensic veterinarian to try to identify the breed and cause of death, the marshal’s office said.

Peabody is in the Cherokee County Adult Detention Center on charges of aggravated cruelty to animals and making a false statement to investigators in lieu of $22,400 bond.

It’s not real clear from the wording in that quote if the dog remains found at the house are those of the previous K-9, Dale, or if it is yet another dog he potentially killed.

It is also mentioned in that AJC.com article that Peabody’s wife, Tyler Verlander, has been charged with what is reported as “unrelated” charges involving improper running and licensing of boarding and training services, seemingly from within their home. This obviously leaves plenty of questions in regards to the supervision of K-9 officers and the dogs assigned to them by the Cherokee County Marshal’s Office. It shouldn’t be hard to determine the difference between a dog that choked on a toy and one that was shot to death. That would imply that Peabody’s word was taken without question in the previous case and not even a cursory investigation was carried out to confirm the cause of death.

Once Lt. Peabody receives his slap on the wrist for murdering two dogs, there should be some sort of inquiry into whoever is ultimately responsible for the welfare of the dogs, as well.