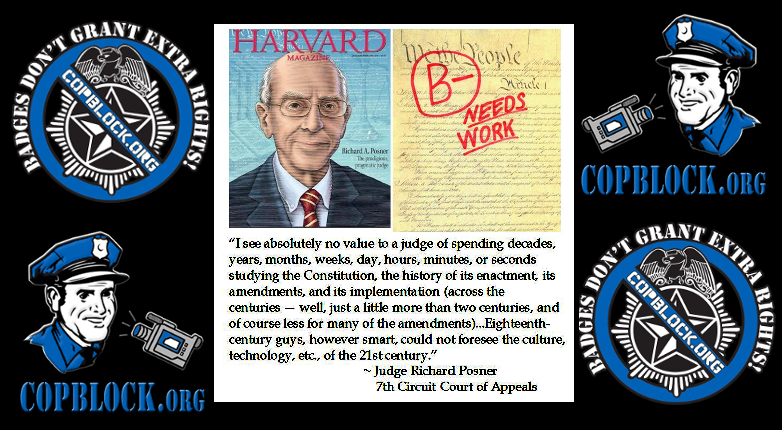 According to Judge Richard Posner, of the Seventh Circuit Court of Appeals, the “eighteenth-century guys” responsible for writing the Constitution could never have foreseen modern culture and technology.

Therefore, in his eyes, it’s just a waste of time for judges to study the Constitution and the history behind it, since it’s irrelevant to today.

Those comments came in an article as part of an ongoing series of articles entitled the “Supreme Court Breakfast Table,” which bills itself as, “An email conversation about the news of the day.” It’s hosted at Slate.com and features a discussion of issues relating to the Supreme Court and the Supreme Court Justices.

Within that post on June 24th, Judge Posner stated:

I see absolutely no value to a judge of spending decades, years, months, weeks, day, hours, minutes, or seconds studying the Constitution, the history of its enactment, its amendments, and its implementation (across the centuries—well, just a little more than two centuries, and of course less for many of the amendments). Eighteenth-century guys, however smart, could not foresee the culture, technology, etc., of the 21st century. Which means that the original Constitution, the Bill of Rights, and the post–Civil War amendments (including the 14th), do not speak to today. David Strauss is right: The Supreme Court treats the Constitution like it is authorizing the court to create a common law of constitutional law, based on current concerns, not what those 18th-century guys were worrying about.

In short, let’s not let the dead bury the living.

Nor, according to Mediaite.com, is this the first time Judge Posner has expressed that he gives no fucks about the Constitution and its old-timey ways:

Posner, an influential jurist who has served as a federal judge for thirty-five years, has previously voiced his disregard for the Constitution. “I’m not particularly interested in the 18th Century, nor am I particularly interested in the text of the Constitution. I don’t believe that any document drafted in the 18th century can guide our behavior today,” he said during a 2015 colloquium. This is why the reliance on the courts and the Constitution itself for justice is an exercise in futility. Regardless of what the original founders meant when they wrote it, the people wearing those robes right now are the ones that interpret it now and guess who they work for.

Some of them, like Judge Posner, don’t even pretend to respect the protections the Constitution supposedly provide. Recent rulings essentially eliminating Fourth Amendment protections should be evidence enough that he’s not alone in that disdain.