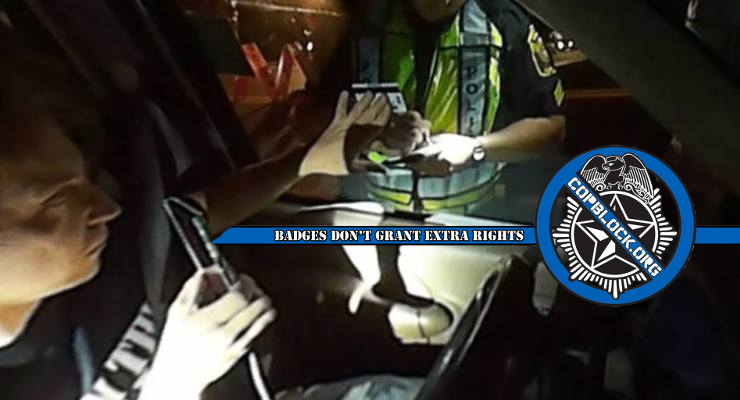 It’s the 4th of July and already we have checkpoint videos flooding into Copblock.org. This one however is special, this one is in virtual reality. In a submission by Scott Marshall of the Oath Accountability Project, we have a video featuring Cop Blocking in virtual reality.

This isn’t the first time they’ve used 360 technology in a great video. But this time you can ride with Scott and watch him shut down half a dozen cops. Really feels like you’re actually there. No worry though, if you don’t have a V.R. headset you can still watch the old fashion way.

For me, I had to try V.R…I really felt like I was in the passenger seat. I watched as Scott waived his right to silence and challenged the officers on each command they gave him. He pulled out and used the fair DUI flyer. He did this so the cops could gain reference to the same laws that he was. It was brilliant!

The first police officers we encounter are confrontational, but you immediately feel like you’re with him shutting the cops down. Midway through the interaction the cops get desperate. They accuse him of having bald tires, which the video doesn’t show, but seemed like a blatant lie. Then things change. The officers realize the situation isn’t going their way.

They give up and do things our way, Scott’s way. By the time the cops let us drive off with no citations for anything, you feel excited and relieved. It was such an awesome way to experience cop blocking. For those of you who have never been out on the streets before, this is as close as it gets to real thing.