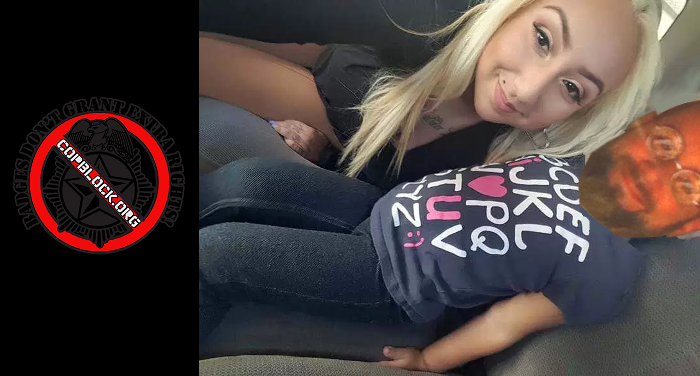 I have recently made several reports regarding the Oakland sex scandal and the young woman at the center, Celeste Guap. While it is expected that every LEO in the USA will have to resign by the end of the year due to having had sex with Guap, the scandal has grown to encompass those outside of policing.

When Guap appeared at my door last week, I did not recognize her. I had no clue that the woman who I thought was just another of the endless CopBlock groupies, which are a regular part of life for my colleagues, was actually a serial copfucker. It wasn’t until she screamed – “Now put your hand in my asshole, officer.” – that I began to suspect something was up.

After I finished crawling out of her cavernous cooze, and had washed my hand with gasoline and a sand blaster, I tried to force her to reveal who she really was. As I now know, that was unnecessary. Nobody has to force that girl to do anything. She freely admitted who she was and then gave me a handy STD checklist to take to my doctor and had me sign her Buy 10 Get 1 Free abortion punch card as a keepsake.

Almost immediately I was filled with shame and regret, which is how Guap would someday feel about her daily LEO DVDA had she not been conditioned towards a life of sexual servitude by police in and around Oakland since her earliest teenage years. As repentance for my poor choices and in order to accommodate several series of treatments I now require to keep my dick from going full on supersonic Bubonic – I will be resigning my position here at CopBlock.org.

Effectively immediately I will no longer be acting as Chief Fluffer of Ademo’s Lap Dog Lackeys. However, in his infinite kindness, our Fearless Leader and Intrepid Savior has granted me a new commission as the CopBlock Network’s first ever Minister of Meth and Propaganda. I will also be working closely with Brian David Sumner in the Cabinet of Pedophile Recruitment and occasionally assisting Kelly Patterson maintain the phone lines we use to constantly call the cops whenever we get scared, like -first thing.

From here on out all articles penned under my name will have been compiled from conversations taken by a room full of chimpanzees interacting with a chatterbot that I programmed to sound just like me. While I will miss all of the writing I have done in the past 16 months, you will still be able to catch all of my classic catchphrases, like –

“I used to be all about weeding out the bad cops, but now I just hate all cops.”

“I secretly know that without police protecting us, everybody would instantly turn into a serial killer and the streets would be a baby rape buffet, but I am just butthurt because I am a criminal.”

And who could forget…

“The reason I do not become a cop and change the system from the inside is because I am a pussy who couldn’t get laid unless I pulled a Cosby or snuck into a coma center.”

Actually, that last one is no longer true. Thanks, Celeste!