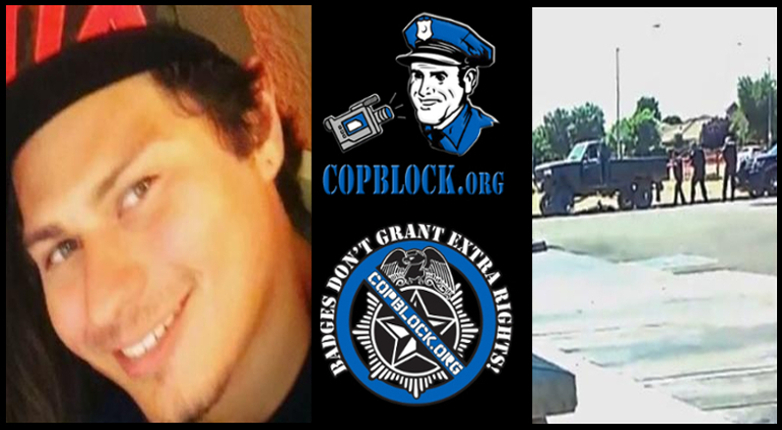 Last night, a video of the shooting of Dylan Noble by the Fresno police surfaced. This video, which apparently was recorded by a witness to the shooting, shows the final two shots of four total fired at Noble.

Noble can be seen on the video, which was released by the Fresno Bee, lying on the ground and raising his arms prior to being shot. In addition, there is a significant pause of fourteen seconds between the first shot on the video (the third of  four shots) and the fatal shot at the end.

Previously, the Fresno Police Department had refused to release the bodycam video of the shooting, citing the oft-used excuse of it being part of an ongoing investigation to justify not doing so. This excuse generally only applies to video that shows the police in a bad light. It’s not at all unusual for video to be released within weeks or even days when that video supports the official story.

This newly discovered video certainly creates plenty of insight and clarity into why Chief Dyer would want to keep the video under wraps for as long as possible. It also shows very clearly why the public needs to continue filming the cops regardless of whether they have dashcams or bodycams.

The original justification for Dylan Noble’s shooting was that they believed he was armed and that he made “suicidal statements” while rushing at the officers. Therefore, they were in “fear for their lives,” another go-to excuse for police.

The fact he was clearly unarmed and already laying on the ground having been shot twice before they finished executing him with the two shots shown on this new video, pretty clearly shows he was no threat to those officers, regardless of what happened prior to that. It’s pretty hard, if not impossible, not to make a case for this as outright and intentional murder.

At best this would be a case of “contempt of cop,” based on their statements that he wasn’t following their orders. In spite of that, this video pretty clearly shows that he was not in any realistic way a threat to them at the time that they killed him and he certainly was not charging at them.

As has been pointed out numerous times on the CopBlock Network, video from body cameras or dash cameras is still not an adequate solution to prevent or even provide evidence of police brutality due to the lack of access to that footage for the public.

The video is only released promptly when it benefits the cops. Other times it has to be fought for tooth and nail and often takes years for that video evidence to be pried from the grip of the Good Cops protecting the Bad Apples responsible for the weekly, if not daily, incidents of police violence.

Other times, even that isn’t a sure thing. Officers “forget” to turn their cameras on, they malfunction, or they simply disappear. The murder of Dylan Noble is just the latest in a string of incidents where the police have assaulted or even murdered citizens and most people would not even question the official story if not for a witness being there and having the wherewithal to film what was happening.

The simple fact is that everyone should still Film The Police every time. Don’t rely on  or expect the police to do the right thing as you’re watching them murder someone.

Incidently, as you can read in the excerpt included below, Chief Dyer has now fallen back on another familiar police trope that this video doesn’t show the entirety of the incident and they had to shoot Noble while he was laying defenseless and without posing any threat because of something that happened earlier.

According to him, the bodycam videos show the entire incident and will magically make what they did justified. So, there’s a simple enough solution to that. Let’s see those bodycam videos that somehow contradict what our lyin’ eyes are showing us in that witness video.

Below is the previously unknown video, via Fresno People’s Media on Facebook:

The description of the video by the Fresno Bee:

Lying on the ground beside his pickup, 19-year-old Dylan Noble has already been shot twice, but is still alive when a Fresno police officer fires a shot toward him. Fourteen seconds later, another shot rings out, according to a video of the fatal incident obtained Wednesday by The Bee.

Police Chief Jerry Dyer said Wednesday that officers believed Noble was about to shoot them during the deadly encounter June 25. But officers later learned that Noble was unarmed.

The video, shot by a witness and showing only the last two of four shots fired by officers, surfaced on the day Noble’s family and friends held a private funeral for him in Clovis and the family’s lawyers released a letter asking for an outside law enforcement agency such as the FBI or the state Attorney General’s Office to investigate the shooting.

Dyer said the FBI has already agreed to investigate the shooting. He also said the video given to The Bee does not give a full account of why the officers felt threatened and were forced to shoot Noble.

The witness’s video is only 26 seconds long. It shows two officers barking commands at Noble, such as “Show us your hands” and “Get your hands up.”

An officer then fires toward Noble as he lies face up, his head closest to the officers.

The officers continue to yell at Dylan, who appears to be moving his hands.

After a long pause, an officer shoots again. The video then shows Noble moving his hands upward.

Related Posts About Dylan Noble on the CopBlock Network: