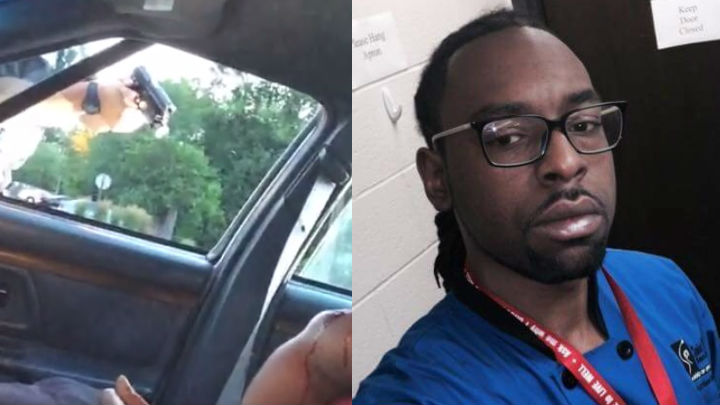 UPDATE II 12:25 AM: The information previously received that was verified by Diamond has turned out, at least according to police, to be false. Fox 9 reports that:

Officer Jeronimo Yanez and Officer Joseph Kauser have both been with the St. Anthony Police Department for four years. Both are on standard administrative leave.

Officer Yanez approached the vehicle from the driver’s side and Officer Kauser from the passenger side. At one point during the interaction, Officer Yanez discharged his weapon, striking Castile multiple times. No one else was injured. A gun was recovered at the scene.

We apologize for the error and would hope that the police would be more prompt on releasing such information. After all, they routinely plaster the names of those wanted for various crimes all over the media shortly after a crime was committed, why should it be different for police?

AGAIN, THE SHOOTER SEEMS TO BE JERONIMO YANEZ

UPDATE 4:19 (eastern): The internet is fast at work. While some are reporting that this isn’t the officer that shot Philando, we’d like to note that it was confirmed by Lavish (aka “Diamond”) – Castile’s girlfriend. See image below. If the police would release the name of the shooter we wouldn’t have to make these assumptions and seek the information many public officials already have. Of course they held Lavish in police custody until the early morning hours (see her video below) but the public (or family of Castile) still doesn’t know who pulled the trigger. Did they hold their officer in custody until 4 am too? We doubt it and we know he’s not booked into their jail either.

Therefore, at this time I believe Rushton IS the shooter, but will confirm when I hear back from the police, who should provide this information promptly!

Andrew Henderson of Minnesota CopBlock has been on the ground in St. Anthony, MN seeking justice for the wrongful death of Philando Castile.

Henderson is no stranger to  outing corrupt and killer cops. Just a few month ago he exposed Jeff Rothecker for his role in making inappropriate comments on social media.

Today Henderson believes he’s identified the officer who killed Castile and set the community into a rage over the senseless murder as Kiel Rushton.

Henderson says he confirmed his suspicion with Lavish Reynolds, the girlfriend of Castile who livestreamed Castile’s last moments after Rushton shot him.

Furthermore, Henderson was pulled over by Rushton in May of 2013 and even stated in the description of the video that:

I got pulled over by the St. Anthony police for having a headlight out. The officer was very professional, and it was a exemplary police interaction. This is the kind of officer I want policing the streets.

While some might think Henderson was mistaken about Rushton being a ‘good police officer’ but I feel that this video shows that Rushton most likely overreacted. Rushton first asked Castile for his ID, then to put his hands up after being told he had a gun and then shot him for ‘not keeping his hands still.’ This is the mentality of a police officer and it’s placed in their minds from day one of the academy.

Now a man is dead and people are justifiably upset.

How many more people are going to die over stupid traffic stops? How many officers are willing to put themselves in a position to take a life over a stop that starts with a burnt out taillight?

Walter Scott, Samuel Dubose and now Philando Castile all died because police stopped them for MINOR vehicle violations. Michael Slager, Ray Tensing and now Kiel Rushton took a life over something as simple as a front license plate missing or burnt out taillight.

When are officers going to stop with these stupid revenue generation tickets that put them in danger as well as those they claim to protect? Is the warning, or ticket, issued for a burnt out light worth the small possibility that SOMEONE might be harmed (officer or person stopped)?

I know I wouldn’t risk having to take a life, lose my career or end up in jail just to nap a few hundred bucks for the state. Seems LEO’s have no problem doing such…. Hopefully you active LEO’s out there won’t be the next Slager, Tensing or Rushton.

Yet, it’s only a matter of time before you do, that’s what your employer is asking of you.