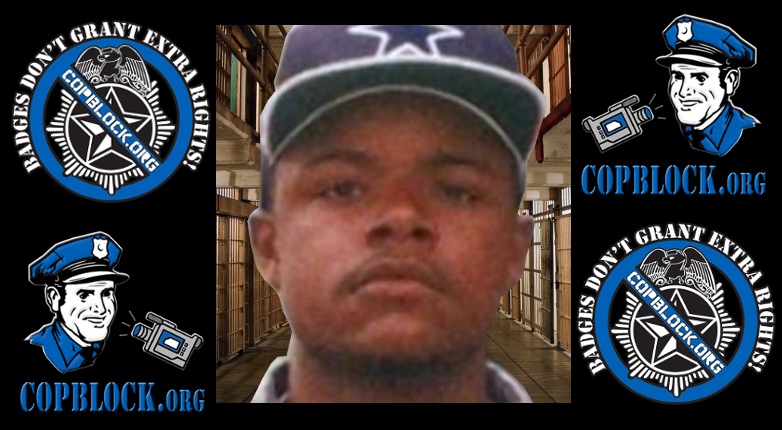 In April, Darius Robinson died after jail guards placed him in a chokehold so tight that it crushed the bone in his windpipe. They also failed to disclose to the paramedics that responded to treat him what they had done. Instead, they were told that he was suffering from withdrawals, even though subsequent toxicology results showed that there was neither alcohol nor drugs of any kind in his system.

Reportedly, prior to the paramedics’ arrival, guards Bryan David Porter, Michael Allen Smith, and Vicki Lyn Richardson handcuffed Robinson and then took turns holding him down as he convulsed and foamed at the mouth. It’s likely that he had already died a slow, torturous death of asphyxiation, due to his windpipe having been crushed by the time they arrived.

Via the Daily Beast:

A state medical examiner found the bone supporting Darius Robinson’s tongue was broken and the surrounding muscles were hemorrhaging from “manual compression of the neck,” as a result of the chokehold used on him inside the Caddo County Jail on April 4. Robinson, a 41-year-old father of seven, died of asphyxiation in what the medical examiner ruled was a homicide.

Robinson’s final minutes alive were so torturous that the medical examiner found a blood vessel had exploded in his left eye.The neck injury was so severe that Caddo County paramedics LaRoyce Fanning and Ryan Warren could not insert a tube less than a half-inch wide down Robinson’s throat to help him breathe. Fanning and Warren tried five times to use the endotracheal tube with no success.

It was only then that they realized Robinson’s airway had been crushed, because the jailers did not tell them about the chokehold, according to the paramedics’ report.

“If you believed you were justified in using the chokehold, you would have told the paramedics about it,” he said. “The fact that you wouldn’t disclose what you did to a first responder… it’s beyond conscionable.”

Jailers Bryan David Porter, Michael Allen Smith, and Vicki Lyn Richardson told paramedics that Robinson was suffering from “DTs,” or delirium tremens, the symptoms of alcohol and drug withdrawal. (A toxicology report found no drugs or alcohol in his system.) These symptoms were supposedly so severe that they required the jailers to pepper spray and choke Robinson into submission after he allegedly charged them.

Robinson then began to convulse and foam at the mouth, according to the autopsy report. Despite clear evidence Robinson was undergoing a medical emergency, jailers placed him in handcuffs and took turns “holding [Robinson] down” as they waited for EMS to arrive, according to paramedics.

After a sternal rub to evaluate his consciousness, the jailers laid Robinson face down on a towel, according to medical reports.

“A sternal rub is something you do if you get your bell rung,” Bryan said. “If you’re having an airway problem, it’s not going to do anything.”

Even if the paramedics had known about the chokehold, they reported Robinson had no pulse when they arrived.

Fanning and Warren didn’t give up though, switching to a balloon-like device that opens up crushed airways.

“It may not have made a difference,” if the jailers had told Fanning and Warren about the chokehold, “but [the officers] don’t know that while they’re standing there,” Bryan said.

The circumstances behind Robinson’s murder are currently being “investigated” by the Oklahoma State Bureau of Investigation (OSBI).

As is usually the case, the Caddo County Jail is equipped with surveillance cameras and the entire incident was caught on video. However, as is the tradition with evidence that implicates law enforcement employees, Caddo County District Attorney Jason Hicks is refusing to release that video.

In fact, Caddo County has refused to release any information whatsoever about Robinson’s death. What little information is known at this point was included within the coroner’s report and medical reports. When Darius Robinson’s brother Ancio arrived at the jail in Anadarko, Oklahoma from his own home in California, he met with Caddo County Undersheriff Spencer Davis.

Davis’ response to Ancio’s questions about his brother consisted of:

“He leaned back in his chair, pushed his cowboy hat back on his head and just told me ‘Sometimes these things happen here.'”

Which I have no doubt is very true.