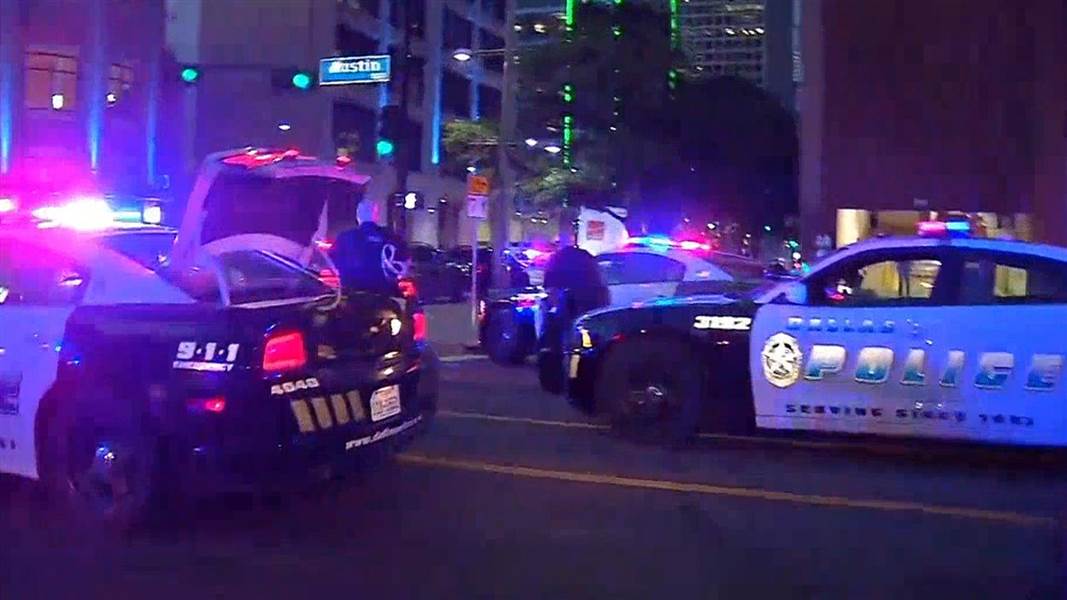 The post below was written by Dan Sanchez who’s the Digital Content Manager at FEE, developing educational and inspiring content for FEE.org, including articles, ebooks, and courses. His writings are collected at DanSanchez.me as well.

Five police officers were killed and six were injured in Dallas yesterday when snipers opened fire during a protest of the recent police killings of Philando Castile and Alton Sterling. This mass shooting was a despicable act of murder.

It was also blowback.

The motor of this spinning cycle of reciprocal bloodshed is collectivism.

“Blowback” is a term generally reserved for foreign policy. It refers to the reverberating ill effects of foreign interventions. Ron Paul famously and persuasively characterized the 9/11 attacks as blowback from decades of US warfare and imperialism in the Greater Middle East.

In the 1980s, American support for the anti-Soviet Mujahideen in Afghanistan helped lay the groundwork for what would become Osama bin Laden’s jihadist network, Al Qaeda. And in the 1990s, further US interventions in the Middle East spurred the jihadis to turn on their former sponsors and to wage a terrorist war on the west that culminated in the attacks on September 11, 2001.

The outrage elicited by those attacks provided cover for a massive US-led war for the Greater Middle East that rages to this day. That Long War has only served to plummet the entire region into chaos and carnage, which has caused the number of jihadis and would-be terrorists to grow exponentially. As a result, western civilians continue to suffer blowback in the form of terror attacks in San Bernardino, Orlando, Paris, Brussels, etc. These attacks are fueling Islamophobia and driving calls for further violence and repression against Muslims.

The motor of this spinning cycle of reciprocal bloodshed is collectivism. Seeing fellows attacked prompts fear and anger. Fear and anger focused by the lens of reason pinpoints individual offenders for the delivery of justice. But refracted through the lens of collectivism and primal reaction, fear and anger disperses into indiscriminate terror and hate, which scatters to cover whole populations who are ascribed collective guilt and prescribed collective punishment.

But this phenomenon is by no means restricted to international affairs. It can characterize civil unrest as well. Again, what we saw yesterday in Dallas was, if not something even more diabolical, blowback.

The American people feel under siege. Different populations feel besieged by different forces. Black Americans especially have suffered decades of persecution by the American “justice” system: police brutality and harassment, mass incarceration, being nickel-and-dimed by tickets and fines, etc. And especially since the summer of 2014, they have been seeing a litany of viral photos and videos of black Americans having been gunned down, throttled, and broken by the police.

This violence too is driven by collectivism. Law enforcement officers are granted an exceptional status in society: a special dispensation to mete out violence with impunity. This caste privilege has instilled deep tribalism in many police officers, which is amplified by training and police union propaganda. Cops are trained to be obsessed with “officer safety” and to effectively treat those outside the “blue tribe” (whom they ostensibly “protect and serve”) as an enemy population: as if every American they detain is a potential quick-draw gunman ready to shoot them down in a millisecond. This paranoia, combined with the impunity of the badge, is what makes an encounter with the police so potentially lethal: especially for black civilians.

Take the collectivism of “blue” tribalism explained above and add, for some individuals, the collectivism of racial terror (irrational, hateful prejudice that every black male is a potential super-predator), and you begin to understand the epidemic of police violence against American blacks.

Badges do not grant extra rights, but neither do they negate the human rights of officers.

This police violence has elicited thoroughly justified fear and anger. Virtually all of this emotional response has expressed itself in peaceful protest, led by the Black Lives Matter movement.

However, for some already-unstable individuals, it can boil over into terror, hate, and indiscriminate violence: blowback. Ismaaiyl Abdullah Brinsley was filled with hate when he killed two off-duty NYPD officers in 2014 following the killing of Michael Brown and Eric Garner. So was whoever killed five police officers in Dallas yesterday following the killing of Philando Castile and Alton Sterling.

True justice is always individual and never collective. Badges do not grant extra rights, but neither do they negate the human rights of officers. Victims of police violence have a right to protect themselves from current attacks with proportional defensive force against actual perpetrators. They or their heirs also have a right to secure restitution from the specific individuals who violated their rights. But collectivist “retribution” is neither defense nor restitution.