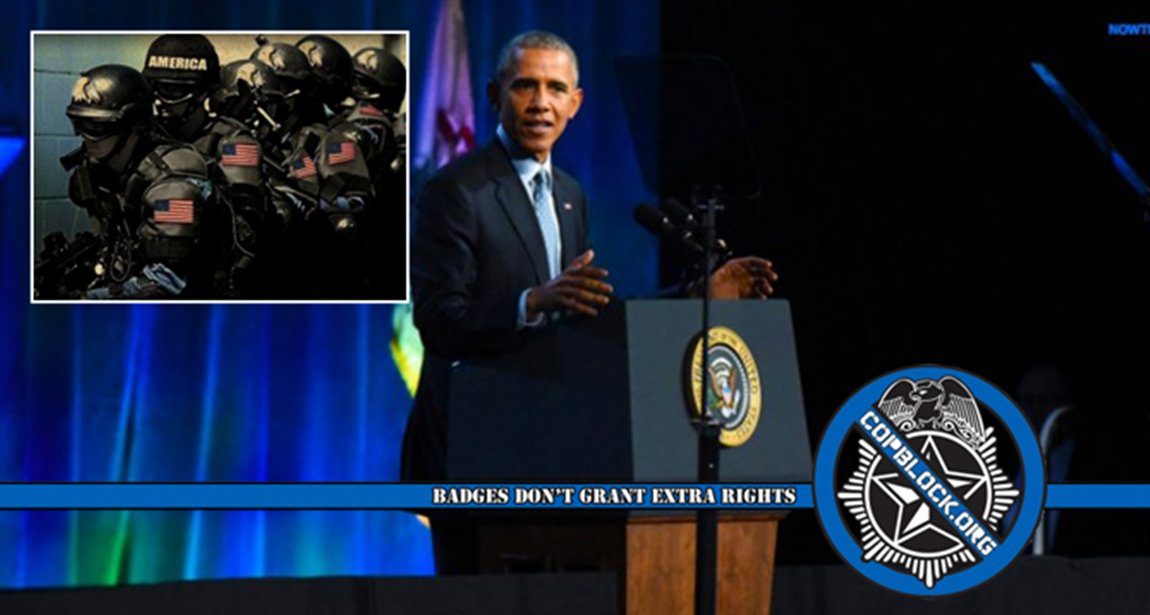 Following the Dallas police shooting that left five officers dead and the cop killings of Alton Sterling and Philando Castile, President Obama is utilizing the tragedies to push for greater federal control of law enforcement.

The agenda to consolidate federal authority over local law enforcement dates back decades, but if you want to get up to speed on what has occurred during the last several years, you can CLICK HERE for some of the important details.

Obama took the trajectory of greater federal control to a new level however, when he began touting the recommendations of a panel that he picked after the 2014 street riots in Ferguson, Missouri that followed the death of Michael Brown.

In March 2015, the Obama Justice Department announced that it had selected six U.S. cities to serve as pilot sites, to develop and deploy federal guidance for local police to “create better procedures, reduce racial bias, and regain citizens’ trust.”

In an article published on Friday, I examined racial bias in the criminal justice system and referenced the findings of numerous studies, reports, and data sets that refute claims of systemic discrimination by police. Unfortunately the truth has a way of inflaming racial egalitarians married to the ridiculous notion that all people are interchangeable cogs that can have equal outcomes if only certain social conditions are met.

In fact, one of my fellow contributors here at CopBlock.org called me a “Neo-Nazi” on Facebook for tacitly referencing the well-documented correlations between things like crime and socio-economic status and biology. (everyone knows simply saying science is racist is a perfectly legitimate argument you see.)

I bring this up because for anyone with eyes to see, the regime of political correctness thrives on and promotes the emotional and childish rhetoric of Social Justice Warriors in order to justify increases in the power of the state. This is exactly what the Obama administration has been doing over the last several years to garner more control over local communities.

The report released by the President’s Task Force on 21st Century Policing calls for the establishment of “programs that take a comprehensive and inclusive look at community-based initiatives that address the core issues of poverty, education, health, and safety” – things the Justice Department apparently thinks a federal policing apparatus should have the authority to oversee.

The report urges the feds to effectually overtake the training and practices of local police departments by using federal lawsuits, grants (bribes), and threats to cut federal funding to them in order to bring them into compliance with the Party line. So far, more than 30 police jurisdictions have been sued in order to force these “reforms.”

Critics of the plan say what the Obama Justice Department is doing is nothing more than an underhanded way to further nationalize and federalize law enforcement by utilizing the same tactics used to impose the hugely unpopular national “Common Core” standards on states and schools nationwide in direct violation of the 10th Amendment.

“I want to start moving on constructive actions that are actually going to make a difference,” Obama said in Warsaw, Poland on Saturday addressing the recent police and suspect killings. He added that the President’s Task Force on 21st Century Policing offered “practical concrete solutions that can reduce – if not eliminate – the problems of racial bias” in law enforcement.

The fatal shootings are an opportunity to push that agenda, Obama maintained. “If my voice has been true and positive, my hope would be that… [the panel] surfaces problems, it frames them, it allows us to wrestle with these issues and try to come up with practical solutions.”

Accusations of racism have always been used to expand the power of governments. I must reiterate this for those that are genuinely concerned about the status of liberty. What we are currently seeing is not occurring in a vacuum. Racial agitation is the program of the radical socialist/communist left. We need only look at almost any communist society throughout history to see how these very same tactics have been applied before.

To learn more about the ongoing plan to federalize police in the United States, watch the short production below. While I don’t necessarily agree with everything put forth in it, it provides a decent outline in a short period of time of what is currently coalescing around the function of law enforcement.

If government police are going to exist, we need to decentralize their power as much as possible. It is much easier to affect change in local communities with people you are on a first name basis with than nameless and faceless bureaucrats 100s or 1000s of miles away in Washington. Don’t be fooled by the egalitarian narratives being used to sell totalitarian measures of social control. This has nothing to do with “equality” or “justice.” It has everything to do with power.