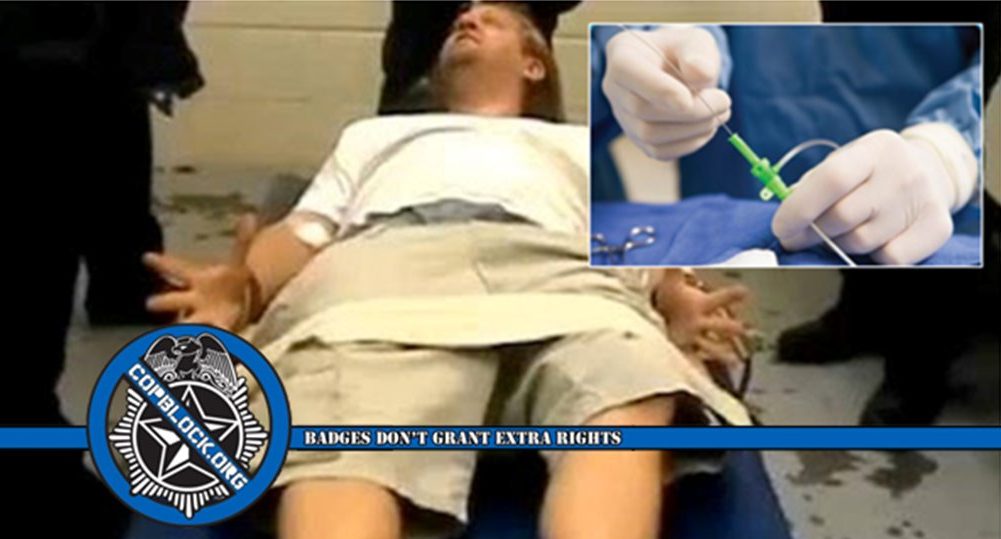 South Dakota police officers are strapping people to beds and having catheters forcibly inserted into their urethras in order to extract urine from them, attorneys say.

According to attorneys for a Pierre man charged with felony drug ingestion who is asking a judge to throw out evidence in his case from an involuntary urine sample, the policy is not new. State prosecutors say the practice is legal but many disagree.

Dirk Landon Sparks said his constitutional rights were violated on March 14 following a report of a domestic disturbance. After being taken into custody, a judge signed off on a search warrant for Pierre police to obtain blood or urine after officers claimed Sparks had become fidgety.

When Sparks refused to comply voluntarily, attorneys say the cops transported him to Avera St. Mary’s Hospital where he was strapped to a bed while a catheter was forced into his penis so that a urine sample could be extracted.

Sparks was charged with obstruction, two counts of felony drug ingestion, and possession of marijuana and drug paraphernalia after his urine tested positive for THC and methamphetamine.

In a motion filed May 16 in Hughes County, attorneys for Sparks argued that forced catheterization was not explicitly authorized by the judge in the warrant for blood or urine, meaning that Fourth Amendment protections against unreasonable searches and seizures were violated.

A Lake Andes attorney who has represented several clients that have had urine samples forcibly taken, Tim Whalen, said healthcare workers at the Wagner and Platte hospitals routinely preform the extractions without anesthetic.

Hein said when an officer has suspicion of drug use, he can request a warrant for testing but the threat alone is usually enough to obtain a sample. She said only when voluntary testing is refused does force become necessary, but added that she thought the process was being abused.

The Pierre police department and the Hughes County State’s Attorney office have not offered any comment on the Sparks case or the practice for forced catheterization as a whole.

It’s not clear now often forced catheterization is being utilized in South Dakota but Attorney General Marty Jackley said the practice is permitted with a signed court order under state law. He referenced several cases that he said supported the legality of the practice.

ACLU South Dakota legal director Courtney Bowie disagreed however, and said there are definitely some serious legal concerns to consider, especially when taking into account the sex of suspects, officers, and health workers involved in an extraction.

“It would be completely improper for people to place a catheter on an individual of the opposite gender,” Bowie said. “That would border on an unlawful assault, battery or rape.”