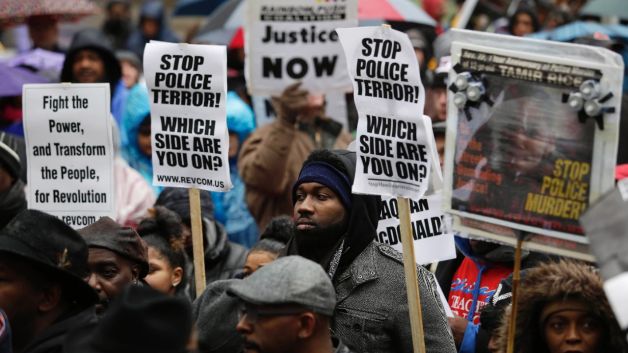 The family of a man killed by Wauwatosa officers is far from quiet on the slaying. Still, they cry out to city officials and Wauwatosa PD, demanding details on what happened to Jay Anderson. Tensions escalated recently, after protesters organized a peaceful march from WPD station and through Wauwatosa. This show of determination was an unusual sight in Tosa, and raised awareness of the killing in the suburb.

Wauwatosa PD entered their Friday afternoon with protesters amassing outside their station in angst. According to Wauwatosa Now, the march continued to Mayfair Mall and, at around 5.45pm, trekked back to WPD. Some chanted, “no justice, no peace, no racist police”, held signs, and voiced their frustrations. Interestingly, Wauwatosa Now referenced how protesters momentarily blocked traffic, causing people to reputedly “honk in frustration.”

Wauwatosa officers stormed the mall at around 5:30pm with other authorities, some wearing SWAT gear. Protesters were largely orderly, however, and had a peaceful confrontation with authorities outside Boston Store. Over fifty people were in attendance, shutting down the mall for a short time before leaving. According to Wauwatosa Now, the number of protesters ultimately swelled to a couple hundred.

Anderson’s family reputedly received no counseling or care following the killing, and expressed this during the march. While at WPD station, Anderson’s family denounced  Captain Tim Sharpee’s reiteration of Tosa PD Chief Barry Weber’s narrative. Protesters demanded to speak with Weber, who didn’t appear though was in the station according to officers. Weber did, however, make an appearance for media once protesters left, stating all lives matter and WPD respects the right to protest. Anderson’s family continues to demand the dash cam footage of that night’s killing, a subject of the march.

CopBlock contributors filed freedom of information requests months ago for WPD’s dash cam policy, and received it. Among the points of interest in the document is the presence of a setting called “squad check”. Squad check is intended for the officer to make sure the dash camera works correctly. Several settings are available, including OWI and State, each with unique deletion actions.

Whereas footage is deleted after 450 days for OWI, 120 if none are selected, and not at all if saved under state, squad checks are deleted within a day. If Jay Anderson’s killing was somehow saved under squad check, then dash cam footage may be impossible to obtain. That’s assuming, however, the unidentified officer inappropriately saved the footage under squad check.

In WPD’s 2014 annual report, Chief Weber expressed skepticism of the effectiveness of body cameras. He outlined his feelings on page 6 of the report, functioning as a letter from Weber to Wauwatosa’s government and residents. “Body cameras do not solve the problems that everybody believes they will”, Weber wrote, despite existing data to the contrary. Weber went onto say WPD will “make decisions based on data, prevailing law, cost and whether we believe this to be a worthwhile tool.”

Weber asserts his idea that “rather than address problems with our society, the police forces are expected to change.” That was Weber’s perspective two years ago. Today, the Anderson family’s perspective is that their loved one is dead without a word from his killers.

The march was provoked by Tosa PD’s reluctance to provide detailed information on the killing of 25 year old Jay Anderson. What is known is at around 3am on June 23d, an unidentified Wauwatosa officer approached a car deemed suspicious. The car was parked in Madison Park, which straddles Tosa’s northern border with Milwaukee.

At some point, WPD claims the officer noticed the occupant–Anderson–was armed and fired into the car. Press photo’s from the scene show Anderson’s shot out rear windows, though this detail wasn’t provided by police.

WPD passed the investigation to Milwaukee PD, as law mandates shootings be investigated by an outside agency. However, MPD itself is under DOJ review, so the likelihood of a fair and thorough investigation is up for interpretation. Tosa PD Chief Barry Weber provided journalists with initial details at the scene, while admitting he didn’t talk to the officer. Weber claimed to not know why the officer feared for their life, and said more details were coming the following day. These promises proved empty, as WPD spokespeople announced no press conference would be held.

As a result, many people in Wauwatosa remained ignorant of the killing until the protests Friday. For those “honking in frustration”, Jay Anderson’s death is of little importance to their suburban lives. Anderson’s family, however, is refusing to allow Tosa residents to keep their heads in the sand.

“This family is hurting”, says Anderson’s aunt, “this community is hurting. We need some answers.” Lamar, another family member, asked that WPD and Tosa “show some care. It isn’t about skin color, man. We’re the human race, and we need to stand up for what’s right.”

Chief Weber claims to be “as impatient as anyone else.” “It’s so hard for families on either side to wait for decisions, but this is the system in America.” In this instance, Weber appears to be referencing the family of the officer as well as Anderson’s. However, whereas the officer in question may lose their job or face charges–worst case scenario–they’re still alive..whoever they are. Jay Anderson on the other hand was torn from a finance’, child, and adoring family. Perhaps now isn’t the time to defend the actions of an officer who remains unidentified, for a shooting Weber’s force is keeping under wraps.

Wauwatosa PD has a long history of racial discrimination and profiling, and has been brought to court over this before. Most incidents were thrown out, and no consequences sought after. Several WPD officers were charged along with members of the fire department in the late 80’s, following a racially insensitive party.

The party was held on Martin Luther King Day, and saw officers attend in blackface  wearing stereotypical name tags. Chief Weber was later questioned on his decision to promote one officer, John Bozicevich, to lieutenant. Bozicevich reputedly hosted at least one of the parties at his home in the 80’s. Weber later stated he believed there were “no lingering effects” from Bozicevich’s participation in racist parties.

As mentioned in a prior piece on Anderson’s death, Weber also mobilized against a critical comic. Tosa East student Dan Moore produced a comic for his high school newspaper showing a Tosa officer stopping a black driver. “You realize you’re black driving in Wauwatosa right?” That’s what the officer, with note pad in hand, asks a seemingly upset driver.

Although Moore said he’d noticed the pattern after years living in Tosa, Weber called the comic unfair. He even went onto suggest such comments can “cause problems when, in fact, there are none.” Other stints of racial malpractice are covered along with Moore’s comic and the MLK day parties in the documentary Speak Friend And Enter.

The film also interviewed a former writer for Wauwatosa Now, Jon Olson, whose worked with Tosa PD in the past. Over the phone, Olson claimed to have “African American friends who’ll really try to avoid driving through Wauwatosa because they’re stopped for no reason.”  These are just those which have been documented, there are countless similar stories involving WPD which remain untouched.

Even the writer of this article has been stopped and questioned by WPD officers on a racial basis. With so many skeletons in WPD’s closet, perhaps it’s best that Weber offer Anderson’s family transparency before it all hangs loose.