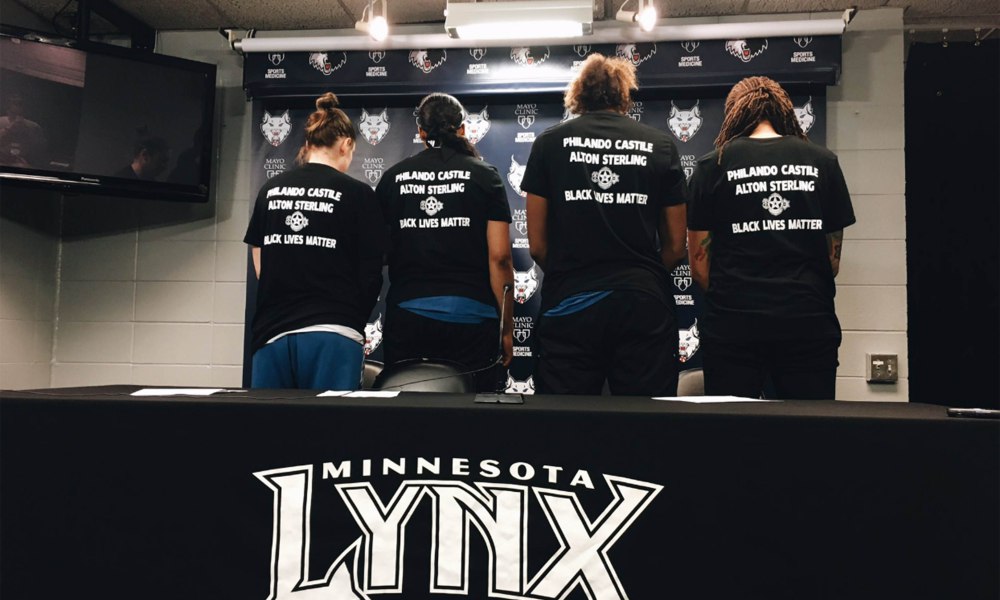 “Who will protect us if not for the police?”

Those are the repetitive cries from CopSuckers alike and at Saturday’s Minnesota Lynx (WNBA) game the police gave us the answer when they walked off the “job.”

Because they didn’t like the warm up T-shirts of the home team. According to USATODAY.com:

The t-shirts said, “Change Starts With Us — Justice and Accountability” on the front and then had Castile and Sterling’s names on the back, along with the phrase “Black Lives Matter.” The back of the shirt also featured the shield of the Dallas Police Department.

Last Thursday night, five police officers were killed by a man who went on a shooting rampage in Dallas during a police brutality protest.

The officers who were working the game walked out and have removed their names from the list of officers available to work future games.

But who was left to protect the patrons of the WNBA game? According to a statement released by the Lynx management protection was never a concern:

“While our players’ message mourned the loss of life due to last week’s shootings, we respect the right of those individual officers to express their own beliefs in their own way. At no time was the safety of our game in question as Target Center staffs extra personnel for each and every game,” the statement continued. “The Lynx and the entire WNBA have been saddened by the recent shootings in Dallas, Baton Rouge, and St. Paul. We continue to urge a constructive discussion about the issues raised by these tragedies.”

The Lynx organization took the high road in saying that the officer’s had the right to express themselves as much as anyone else (which is true). Yet, it should be noted that the police officers, while in government issued uniforms, were actually Lynx employees at the time, meaning they were contractually obligated to work as protection in that venue. They basically quit their job, lol. This was pointed out by Minnesota Police Chief – Janeé Harteau:

“While I do not condone the actions of the officers, I realize how every member of law enforcement throughout this country, including myself, is feeling right now. Everyone is hurting and we all need to find a way to come together. I am proud of our profession and the service our officers provide on a daily basis. Accountability is a must but police officers also deserve and need public support.

Although these officers were working on behalf of the Lynx, when wearing a Minneapolis Police uniform I expect all officers to adhere to our core values and to honor their oath of office. Walking off the job and defaulting on their contractual obligation to provide a service to the Lynx does not conform to the expectations held by the public for the uniform these officers wear.

Harteau concluded with the traditional call for unity but failed to mentioned if these officers would face any discipline for disrespecting the uniform so much, in her opinion. Yet, I give her a LITTLE credit for calling them out and I’d like to thank them for showing us a few things.

One, if the police walk out chaos will not ensue.

Two, paying police officers directly, instead of via the government through taxation, already happens. Police commonly work at popular events but are paid by the private sector (or business owners). If this is allowed for sporting teams and other venues than why can we as individuals choose other forms of protection and opt out of the government option?

I mean if we really want to solve ALOT of the problems we see/have (subjectively) with policing, being able to withdraw funding is crucial step but that won’t happen until we demand the removal of the government’s monopoly on the service of protection. Once the government no longer has a monopoly on protection services, then we will no longer have to fight about whether it was cold blooded murder, racism, right or wrong. All you’d have to do is watch the video, gather the facts and decide if you’d like to send them money for services at the end of the month. Or if you’ll be seeking a new protection company that isn’t (insert whatever reason you came to for not sending the check here).

It’s really that simple. Just ask the Lynx organization. They aren’t going to be hiring those cops again, even if they didn’t take their name off the “easy work” list.