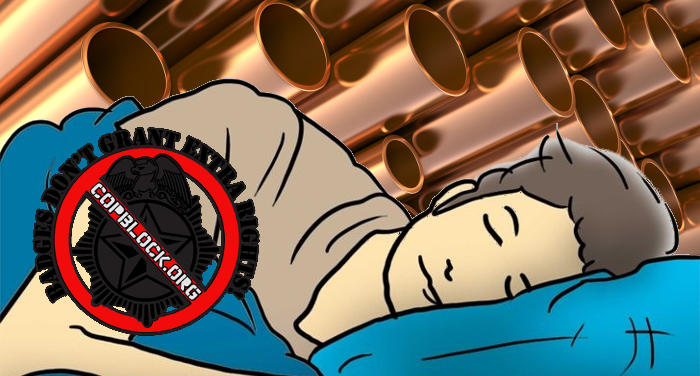 Over the course of my time with the CopBlock Network I have seen many people suggest that insuring or bonding police officers against their individual misconduct would be the great solution to issues of the police state. While the person making the suggestion always seems good-natured and well-intended, their proposed response to the many issues of policing is naive at best. At its worst it just feeds the entire bogus accountability movement, which is itself an oversimplified and misguided attempt to bandage a critically hemorrhaging wound in the freedoms and liberties of peaceful human beings.

Below is a sample of the most recent suggestion to make police accountable I have seen in our reader submission files. While I commend the author and found the piece well-written, I will keep them anonymous despite their permission to use their name since I will be critiquing it and do not wish my scorn for the idea to reflect upon that individual personally.

The past few years have witnessed a succession of controversial uses of deadly force against unarmed men by police officers. These tragic events have enraged many, and appear to have precipitated the murders of five Dallas police officers by Micah Johnson. The rise of advocacy groups such as The New Black Panthers, the African American Defense League, and Black Lives Matter attests to the deep feelings of injustice and betrayal engendered by the failure of police agencies, district attorneys, grand juries, POST boards, and the federal government to adequately investigate and punish police misconduct. Clearly, there must be better ways to hold rogue police officers accountable.

As things stand, officers who act unprofessionally have many layers of protection, from the presumption that they acted in an official capacity (and are therefore entitled to immunity), to Internal Affairs investigations that often amount to little more than a whitewash of the officer’s questionable conduct, to D.A. and/or grand jury investigations that rarely result in criminal prosecution. The system is biased in favor of exonerating rather than punishing police misconduct.

Compare the lack of accountability in law enforcement with the way things are in many other professions. Physicians, for example, are required to be licensed and covered by professional liability insurance. When a physician is suspected of misconduct, the licensing board can move swiftly to suspend his license, effectively preventing him from practicing until the charges against him have been addressed. Professional liability insurance provides an added layer of consumer protection. In order to practice, physicians must carry this insurance in addition to licensure and insurability requires that they be in good standing with the licensing board. Liability insurance also provides a means of compensating victims of unprofessional conduct.

For decades, state licensure and private liability insurance have effectively held thousands of professionals accountable for their conduct. There are no inherent obstacles to extending this same quality control system to law enforcement officers. While this system may seem burdensome to some, the social and economic costs of police misconduct justify the inclusion of law enforcement in this tried and true regulatory scheme.

The most crucial issue with this idea is that it requires the rest of the justice system to perform its duties fairly and without prejudice or favoritism. That simply cannot be so, for many reasons. Chief among them is the fact that all of those agencies are part of the single body of government. The health and well being of that body requires that it protect itself from outside forces. Those who stand to seek damages against any limb of that body threaten the whole body.

Even if these bonds or insurance make individual officers or departments responsible for any damages they cause, the reputation of that department is connected to the overall health of the state. The state must protect its own reputation by standing behind the acts of its agents, no matter how non-reputable they may be. Only occasionally does it throw one of its own under the bus, and only in order to give the appearance of fairness and accountability.

It is all a ruse. The entire system from the top down is stacked against us, and cops are the whip handlers that stand between us and our government/corporate masters. Any system of bonding and insurance would face a problem already inherent in the system, that it simply cannot afford to hold itself or its members accountable for its own survival. In fact the insurance companies themselves, already heavily involved in lobbying into existence unthinkable stacks of legislation that benefit its monopolies, would not allow the turn of events the people suggesting this scenario imagine.

Another major reason it would not work is because it would not stop killing. Police are being trained towards skittish, fearful responses that make them jump at shadows. They certainly aren’t going to stop and think about their insurance policy before firing. The aftermath of police shootings seems to have little to do with what causes them, which is a system of training and conditioning that produces neurotically fearful killer robots, as well as an ideology and culture of superiority and entitlement.

When we discuss these issues we often remain all too focused on only the major trespasses of police against individuals like brutality and killing. While, in fact, most of the policing issues are normal everyday routines as I have previously explained:

While killing stands out as the most obvious and egregious way that we are stripped of natural freedom, it does not add up to all of the lesser thefts of freedom that we experience as part of everyday living. Our law-makers are predators that have gorged themselves on our freedoms through the enactment of more laws than anyone could break or enforce in a lifetime. And the enforcement branch has tagged shortly behind like jackals waiting to pick the rest of our freedom from our bones using the same penal codes. And it is inevitable that violation of any law may ultimately result in the death of the law-breaker. Non-compliance, even when peaceful, is lethal. So every law, no matter how small, is a death threat that forces you to either conform or face repercussions for exercising your freedom in ways that are illegal, even when they are not hurting or interfering with anyone else.

Policing destroys reputations. It steals from us our time, money, health and mental well-being. And it does so only as a means of maintaining its monopoly on force. Which is really all policing is. It is not meant to keep us safe from theft and violence, it is meant to give the ruling elite a legal monopoly on stealing and killing. The thin blue line is only there to protect our keepers agendas and interests, in return for the privilege of maintaining its own.

The insure the police movement suffers from a misguided belief that actual policing is the same as the idealized caricature of honor and duty that government, corporations and media have conditioned us to believe in against our own will and best interests. Accountability and its various schemes and pipe dreams is just a way of putting the responsibility for our freedoms and liberties in the hands of those who have been most disregarding and abusive of them.

Abolish the police. Not because we hate them, but because they clearly have no regard for us. And a monthly policy rate ain’t gonna change a damn thing.