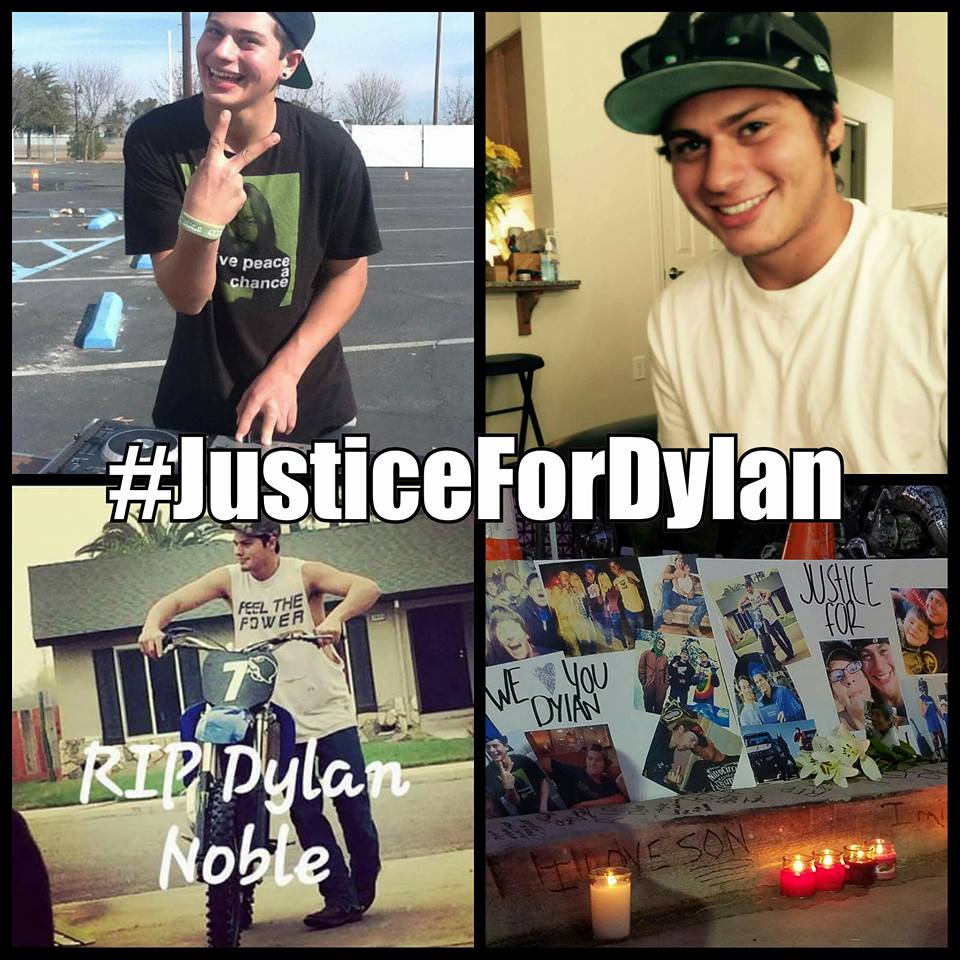 Before watching the video below, read what the Fresno Police had to say about the shooting, via Photography is Not A Crime:

Officers at the scene had warned Noble not to reach into his waistband, believing he may have a gun, but Noble twice reached under his shirt for his waistband, Fresno Police Chief Jerry Dyer said.

Fearing for their lives, one of the officers fired two shots, then a third. Another officer fired the fourth shot.

Police initially responded to a report of a man walking with a rifle about 3:20 p.m. and saw a black pickup speeding. Police tried to stop the truck, but it drove for about half a mile before pulling into a gas station.

Lt. Burke Farrah said Noble did not show his hands, then tried to hide one hand behind his back. Despite officers’ orders to show his hands and drop to the ground, he did not comply. After telling police that he “hated his life,” he approached officers, who opened fire.

This is a sad reflection of the times we live in. One where if you don’t do exactly what a police officer says you could be shot on sight and everyone will justify it. A

While realizing that we live in said times is an important factor to account for while interacting with police, especially since we know they overreact, escalated situations and shoot first, ask questions later.

That being said, police also need to stop fearing for their lives all the time. Dylan didn’t say anything threatening, he didn’t point anything at police and there was more than one officer on scene. In addition, the officers had multiple options for cover – Dylan’s truck and their own cruisers.

A little distance and time might have been all that was needed to realize Dylan wasn’t the man they were looking for and that he was unarmed. Yes, Dylan’s actions did didn’t help his situation but the “professionals” who claim to help and protect people, did absolutely none of that during this stop.

Where in this video did you see protection or help being offered? All I witnessed were commands, threats and escalation (on both sides, but again, I expect police – that I pay for – to react diligently).

The police were merely acting on fear based training that tells them everyone can draw a gun and put a bullet between their eyes in split second. Which simply isn’t true. . . possible yes, but not the common skill set of the everyday person. This fear is only in a police officer’s mind, it’s not the reality in the least.

Furthermore, it really doesn’t matter what we think about this situation because we can’t do anything about. We have no options for protection other than the government provided police. This is usually called a monopoly but not when the government is the holder of said monopoly.

Until we’re able to pay for our protection services directly then what we think about each murder at the hands of a government police officer is pointless. All our difference of opinions means is that we’ll fight about whether it should have happened or not, yet, it won’t change that it happened.

If I lived in Fresno and came to my own conclusion that this was murder, I would call up the Fresno police (or protection) department and say, “I’ll no longer be paying for your services. You guys aren’t providing me with a service I need and I refuse to fund murders and/or thieves.”

If enough people came to that conclusion on their own then I suspect that Fresno Police would be out of business and a better service provider would come to the area. Or the community would adapt to other options aside from government police. As stated in this Rolling Stone article titled, “Policing is a Dirty Job, but Nobody’s Gotta Do It: 6 Ideas for a Cop Free World.”

Of course paying for protection services directly doesn’t PREVENT people from committing such acts as the police of today do, no, it merely limits the debate government murders create. At the end of the day it’s as simple as “Do you like Burger King or McDonalds?” 300 million people can’t agree on that, so we have both (plus 100’s of other options for food), so why are we expected to agree on the service known as protection?

Allow the “good cops” to offer YOU a good service and if they don’t let their businesses fail. That’s how it works for everyone else.

Right now the government has all of us – black, brown, white and whatever – fighting over issues that only matter on an individual level. Yes, we must discuss murder at the hands of those who swore to protect us. Yes, we must be transparent with these events but we do not have to agree on the outcomes/conclusions. I think Burger King sucks, but they still exist because enough people are willing to pay for Whoppers. I don’t care because I’m not forced to pay for Whoppers.

It would be the same if it were related to policing. And even if you think this is a crazy radical idea, well, we’ve tried forcing people to pay for a one size fits all protection service. Look where that has got us? Maybe less government policing is worth a try?