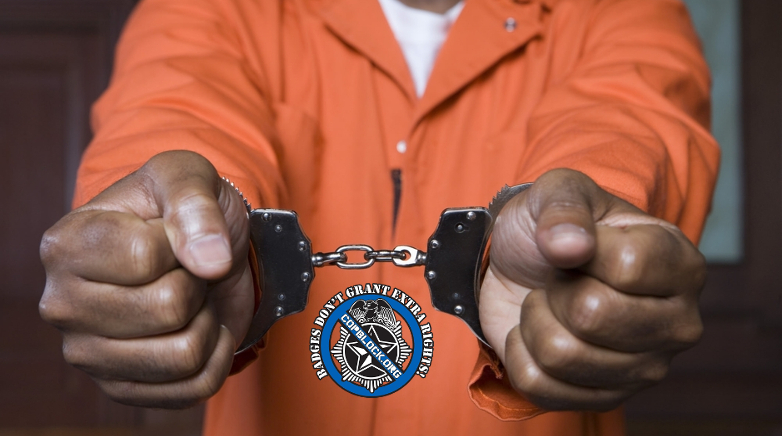 The following post was shared with the CopBlock Network by Andre Guthrie, via the CopBlock.org Submissions Page.

Andre’s submission details how he was falsely arrested and charged with a DUI and the consequences that followed that false arrest, even though the charges were later dropped.

On the evening of October 04, 2014 I went to pick up a friend who I believed had been drinking. I myself had not had anything to drink that evening and figured it was the right thing to do and only wanted to make sure he didn’t drive anywhere.

As we pulled off Morgan Rd. and traveled east bound on Hwy. 152 out of Mustang, OK we were pulled over. I hadn’t been on Hwy. 152 for more than a few seconds, so I knew I wasn’t speeding. However, I’m not from Oklahoma and was using my GPS to guide me. So I really didn’t know where I was or what the reason was for pulling me over. As the officer approached my vehicle, I felt that perhaps it was my Texas plates or the fact that my truck stuck out as a new vehicle to the area and he wanted to know why I was there. Either way, I just wanted to take the ticket or whatever he wanted to give me and leave.

Once the officer reached my driver side window, he asked me if I knew the speed limit on that road. I replied, “not really, but considering it’s a highway, I would assume it’s 55mph.” He replied, “no, it’s 45mph in town and 55mph doesn’t start until you get further up the road. He then requested my insurance and license to which I obliged and handed them to him.

The officer then went back to his vehicle and ran my license. After a few minutes he returned and informed me that I had been speeding. At this point, all trust in this officer had gone out the window. His initial claim was that I was doing 54mph in a 45mph zone but was only going to write the ticket for 52mph so as not to impact my driving record. He also informed me that my registration was expired and I would receive a ticket for that as well. I then informed him that I work out of town and hadn’t realized the registration was out and had no idea that this highway had a 45mph speed limit, but would take the tickets and have my registration renewed the following week. The officer wrote out the tickets and had me sign them, he then handed me my license and insurance along with the tickets. I thanked him and wished him a safe and pleasant evening. He then said thank you and walked away.

As I put away the insurance and license he returned to my window and said, “do I smell alcohol?” I replied, “no.” He then asked if I had been drinking that evening, I replied, “no.” He then said, “be honest, have you had anything to drink today.” I replied, yes, I had ½ a beer that afternoon when I ordered my lunch and watched part of the OU vs. TCU game which was around 3:30 that afternoon. He then asked me to get out of the truck, to which I complied.

As we walked around to the back of my vehicle I informed him that I have vertigo and while I would be more than happy to take his field sobriety test, I cannot however stand on one leg or tilt my head back. My balance is affected by this condition and I haven’t been able to do those things in years. As we stood at the rear of my truck he had me perform a couple of things, which I was fine with. He then asked me to stand on one leg with my foot about 6” off the ground.

I told him this was going to be a problem, not only because of my vertigo but, I was wearing sandals as well. He said just do it, so I tried a couple of times. At one point I held my foot up and was doing it however, he turned his head as not to see it. He then advised me that I would be taken in for a DUI. I was handcuffed and placed in the police car.

As he was placing me in the car, he asked if I would take a breathalyzer. I replied, “no.”After all, I was already handcuffed and heading to jail and in Texas if you refuse the breathalyzer you automatically have to take the blood test. He then asked if I would release my truck to my friend, I replied, “yes.” Now this was the friend that had been drinking, it was at this point I knew it I wasn’t being arrested for alcohol because my friend had been drinking and I had not been drinking.

My vehicle was then released to my friend and the officer and I headed to the jail. As we drove through Mustang I again informed the officer I had no idea where we were and had never been in this area. The officer then pointed out several bars as we passed them and said, it was very common for people to leave these establishments after having had drinks. He also pointed out that it was a busy evening because of the football games. I informed him that I didn’t know any of these places and had not been in any of them.

As we entered the jail and I began the disassembly process, the jailer asked what I was being arrested for, I replied DUI. He kind of laughed and said, “really.” I replied, “yep.” I fully expected to be given a blood test having refused the breathalyzer. However, no one ever came in and asked me to take one.

The next morning my friend arrived with a bail bondsman and bailed me out. I hired Adam Banner an attorney that following Monday morning. I contacted a friend in Texas and had my registration renewed and had the sticker FedEx’d to me. I provided a copy of the registration to my attorney for submission to the court. On November 22, 2015 we had court. The court offered me a plea deal of no contest, pay the tickets, court cost and a couple of months’ probation. All these things totaled over $1,000.00.

I declined the offer and informed my attorney that it was unacceptable as I had complied with the law and recommendations of hundreds of billboards across Texas and Oklahoma that say if you’ve been drinking find a sober driver. I was that sober driver and my passenger had been drinking, but was allowed to drive off in my vehicle while I was carted off to jail.

My attorney has shown me the report submitted by the officer and in that report the officer is stating that I told him I had been drinking that evening, which is a total lie. I had ½ a beer while waiting for my lunch to be prepared at a Oklahoma City restaurant. (By the way, Oklahoma is a 3.2 beer state.) I then went home ate, watched TV and took a nap. Later, I woke up took a shower, brushed my teeth and went to pick up my friend. This was roughly seven hours later and I in no way was anywhere near intoxicated. Now the courts have told my attorney that I will not be allowed a jury trial, which is a violation of my Constitutional rights.

The City of Mustang, Oklahoma dropped all charges however the county later picked them up and increased my bond by several thousands of dollars. I paid my bond and rehired my defense attorney. The county prosecutor tried every form of intimidation and threatening possible to get me to accept a plea. However, I stayed my ground and continued to request a copy of the video both in-car and booking area video as well as a jury trial. After multiple court visits and delays the county dismissed the charges again stating their reason to be “in the name of justice”.

Where did I go wrong? I’m still being denied a copy of my video. I’ve tried writing the court and prosecutor. My attorney made multiple requests and now I’ve even reached out to the Oklahoma State Attorney General’s Office. To this date, my reputation in my industry has been tarnished beyond repair. My professional career is totally destroyed. I’m left with nothing and I’ve not had any success getting back to work. I had to sell all my belongings to support myself and I’ve been sleeping on a friend’s recliner for over a year now.

Please help me find justice for the false imprisonment and malicious prosecution brought upon me by these people. Please help me show them that they cannot indoctrinate another black man into the criminal justice system by charging him with a trumped up gateway crime.