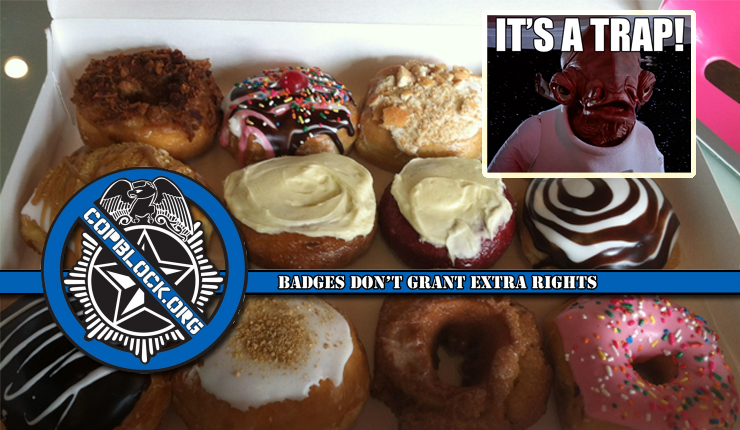 News reports and social media have been flooded with accounts of communities turning to police departments with shows of support and generosity following last week’s attack on police officers in Dallas. People have paid for police officers’ meals, sent them flowers, and even taken up posts as armed sentries outside of police stations.

While officers on the street are even more tense and hypervigilant than usual, many have found temporary refuge in the array of edible gifts being brought to police departments across the nation. However, one frightening incident in California reveals that cops should not be so easily tempted to let their guard down.

An unidentified officer began shouting that he couldn’t feel his face, slapped himself several times, and then got in other officers’ faces yelling for them to “Help me out,” by punching him.  One officer obliged and knocked the hysterical officer out cold. Officials are not disclosing whether he will be charged with assaulting an officer at this time, although inside sources say the officer has previously tested positive for steroids.

Another officer reported that he thought he could fly and jumped out of a window. He didn’t suffer any serious injuries because the room was on the first floor.

An officer who abstained due to gluten intolerance realized they must have gotten a bad batch, and alerted the others by yelling, “It’s the donuts!” Three of his confused colleagues started shooting at the boxes of donuts, hitting one officer in the arm, and grazing another in the forehead. A police spokesman told reporters that the reason they avoided a fatality was most likely due to the fact that most officers were either behind the line of fire, rocking themselves on the floor, or wandering naked in the hallway after taking off all their clothes.

The officer with gluten intolerance, Tim O’Malley, was the only officer involved in the incident who would talk to reporters. He said he did drink two cups of the coffee Martino brought with the donuts, which was later found to have been laced with psychedelic mushrooms.

“I had gone home after all the guys had been talked down and transported to the hospital, and soon after I got there, I started seeing the faces of people that had been killed by other officers in the department during the five years I had been on the force. And even people who weren’t dead but whose lives I knew had been destroyed by some petty arrest or infraction.”

“I thought I was dead and that I’d been condemned to hell. I spent hours sobbing and begging for forgiveness. When the shrooms wore off, I was so relieved that I had a second chance. I handed my resignation in the next day.”

O’Malley says the union president has tried to convince him to pursue disability benefits like some of the other officers have, but he’s not interested: “I’m done with blood money.”

Martino, who was arrested after detectives reviewed surveillance footage, told police she was inspired by noted anti-police comedian, Dave Chappelle’s “sprinkle a little crack on them” routine. Needless to say, police are not laughing.

All of the affected officers are expected to make full recoveries. Chief Frank McCoy posted an announcement on Facebook stating that the department was no longer accepting gifts of food or drink.