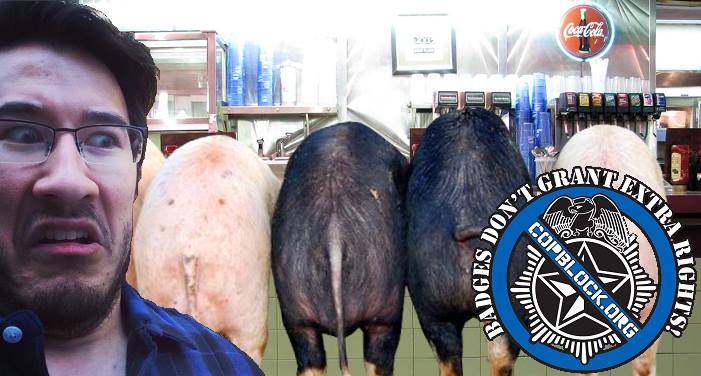 Several contributors here at CopBlock.org have blogged about police officers being refused service, most commonly at a resturant of some sort.

[Read about employees from Arby’s, Jimmy John’s and – even – Starbucks refusing to serve pigs in a blanket (aka; cops in uniform)]

Once refusal is stated the ‘whinny pigs’ (ya, see what I did there) rally the troops to publicly shame the business. Which is fine, a person has a right to share information with others, and it usually works because in nearly all the cases above the corporate, or upper, management back peddles, offering handouts to all pigs alike to smooth things over.

That’s exactly what’s happening with the story out of Sedro-Woolley, Washington that’s making the rounds. According to WTHR.com:

The sheriff of a county about 70 miles north of Seattle says a restaurant owner has asked that law enforcement no longer dine there.

Skagit County Sheriff Will Reichardt said on Facebook that after four deputies finished lunch at Lucky’s Teriyaki in Sedro-Woolley Thursday, the owner asked them not to eat there anymore.

Reichardt says the deputies were told that customers didn’t like law enforcement there. The sheriff says his chief deputy called the owner later Thursday and says the request was confirmed along with a request to spread the word among other law enforcement agencies.

Calls to the restaurant for comment were met with busy signals.

The busy signals were probably a result of the Facebook statues made by Skagit County Sheriff’s Office and Sedro-Woolley Police department; see below:

I find both of these comical and sickening at the same time.

I’d like to point a few things out to the idiots who wrote these statuses.

First off a Skagit County Sheriff’s Office employee said, “... I also understand that as customers we all have the right to find some other restaurant to take our lunch break in.” Well lucky you. Voting with your mind, feet and wallet feels pretty good huh? And if the decision of this business – to stop feeding the pigs – was so bad then you and your buddies could buy it up cheap and turn it into a “CopSuckers Nightclub” in no time.

This is how the free market works.

I wish I, the customer, had the right to find another police department to not kick my, or my neighbors, door in. Instead, if I want to refuse your service, I’m kidnapped, extorted and/or caged from my loved ones.

Seems you got the better end of this deal.

As for the Sedro-Woolley admin who said, “we want everyone to know SWPD will continue to respond and assist them in anyway they request.” AH, duh, they’re still paying your salaries and you technically work for them… you idiot. You make it sound like you’re doing them a favor by providing them a service that you take money from them for.

I really hope the person who wrote that statement isn’t allowed to carry a gun and take people to jail, that would be scary.

The comedy here is that the Boys in Blue are doing what I want to do to their business; ostracized it and get people (both customers and service providers) to seek, or use, alternatives. This is why I say “#FuckYourBadge.” You do not need a badge, uniform and thin blue line to keep people safe. You merely need to offer a service that people are willing to VOLUNTARILY pay you for.

[THIS IS WHY COPBLOCK EXISTS; WE PROVIDE A SERVICE THAT PEOPLE ARE VOLUNTARILY PAYING FOR]

In this case the owner of a business made a decision to not serve LEOs, LEOs decided to (as suggested by the owner) let other LEOs know so they wouldn’t go there either. Seems simple enough, this is the free market at work. You choose to go elsewhere or maybe change what it is that the owner (and his customers) don’t like about you but that’s it.

Why do police understand they have a right to boycott as much as a business owner has a right to refuse service, yet, none of that is applicable to their business or service of protection? The boycott of this business could be what’s needed to start another business near by (this is called a demand). The same could be said for when bad cops show their true colors, that would be the time a demand is created for ‘good cops’ to filil. One that is not like the other and provides what the customers desires.

Maybe that’s a LEO only restaurant or a protection agency that doesn’t hide behind a badge and thin blue line.

In conclusion, simply refusing to serve cops is really of no consequence to a business unless the cops use physical force or harass them afterwards. The fact of the matter is that the police are the few and the people are the many. I think more and more businesses should publicly state that they will not provide their services to cops until they allow us the same freedom (the option) to pay for theirs or not.

If we don’t have the option to opt out, then you shouldn’t let them in yours.

UPDATE: Once I nearly finished this post I found this video update from the owners.

Seems in typical police officer fashion, via threats and intimidation, the business owners have backpedaled and will be giving LEOs some free handouts. You can clearly tell that the owners were frightened, so I guess I was wrong when I thought the officers were merely going to vote with their wallets and feet. Instead they resorted to what they know best, bullying by threat of force.

While the officer on camera and man on bike claimed that denying officers service would be costly to a business, I’ll reiterate what I said above, there are more people than cops. While the backlash from police is quick and harsh, I’m sure the rush of support from those of us who agree with them was coming – and it would be more powerful than theirs.

If you own a business, consider refusing to do business with cops. They don’t give you the option so if they choose your business, tell them NO!