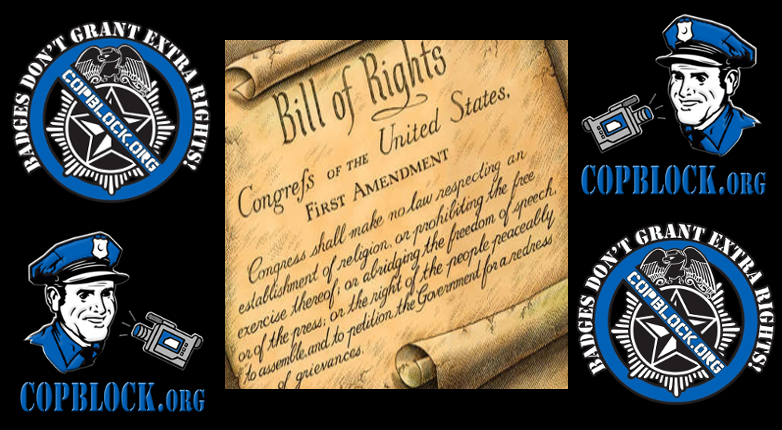 The following content was shared with the CopBlock Network by Katelyn Rothwell, via the CopBlock.org Submissions Page.

In the post Katelyn details how their house was searched and her boyfriend Steven was arrested by police in Maryland after he made a phone call to the Dallas Police Department expressing his opinion that the recent shooting of police in Dallas was a reaction to the behavior of police toward citizens.

Apparently, the Dallas police then contacted the Maryland State Police and claimed he had made threats against them based on his statements that incidents of police brutality and outright killings by police may have motivated the shootings against the police. Regardless of the popularity of such opinions or who it is those opinions are expressed to, it’s pretty clearly a matter of free speech and protected under the First Amendment.

Note: This is a good time for a reminder to always film the police. Filming the Maryland police conducting a search and arresting someone based on the non-crime of using their free speech rights is important. Even beyond that, had Steven recorded what he said during the original phone call, he would have pretty solid evidence of whether he made threats or not.

(By the way, GoFundMe doesn’t allow crowdfunding for legal expenses. If you need to do so, you should use FundRazr instead.)

My boyfriend Steven and I live in Maryland, he follows CopBlock on Facebook all of the time. He called the Dallas Police Department yesterday (July 14th) trying to get them to realize that the shit they are doing (killing unarmed citizens, etc.) is the reason for the murders of cops that have happened in Dallas and everywhere else around the country.

People are tired of police brutality and people are lashing back because of it. He wasn’t saying that it was right or threatening them or anything like that. He didn’t even block his phone number, because he was only using the First Amendment, freedom of speech. He did nothing wrong.

Today, we got a knock at the door at our apartment and six Maryland State Troopers were at the door. They wanted to know why he called them and they stated that he was threatening the police officers over the phone with death threats. Steven told them it was not like that. He explained that he was only speaking his mind to them, saying that it will keep happening if that shit continues. He maybe could have worded it better or went about it differently when he called them, but he never made death threats or anything like that.

They searched our apartment, which was a waste of time, and took his phone, then left. However, they came back about an hour later. They said they had spoken to their higher ups and decided to take it through circuit court and charge him with threatening a police officer over the phone. He is now sitting in jail waiting to speak to the commissioner on Monday.

I was pretty mad when he told me he called them, but that is still not something to get arrested for. I believe this is wrong and I think I am going to start a GoFundMe account to raise money for his bail when we get it Monday. Apparently, our First Amendment rights are being taken from us and our government is falling apart. This is absolutely ridiculous.

Please help us any way you can.