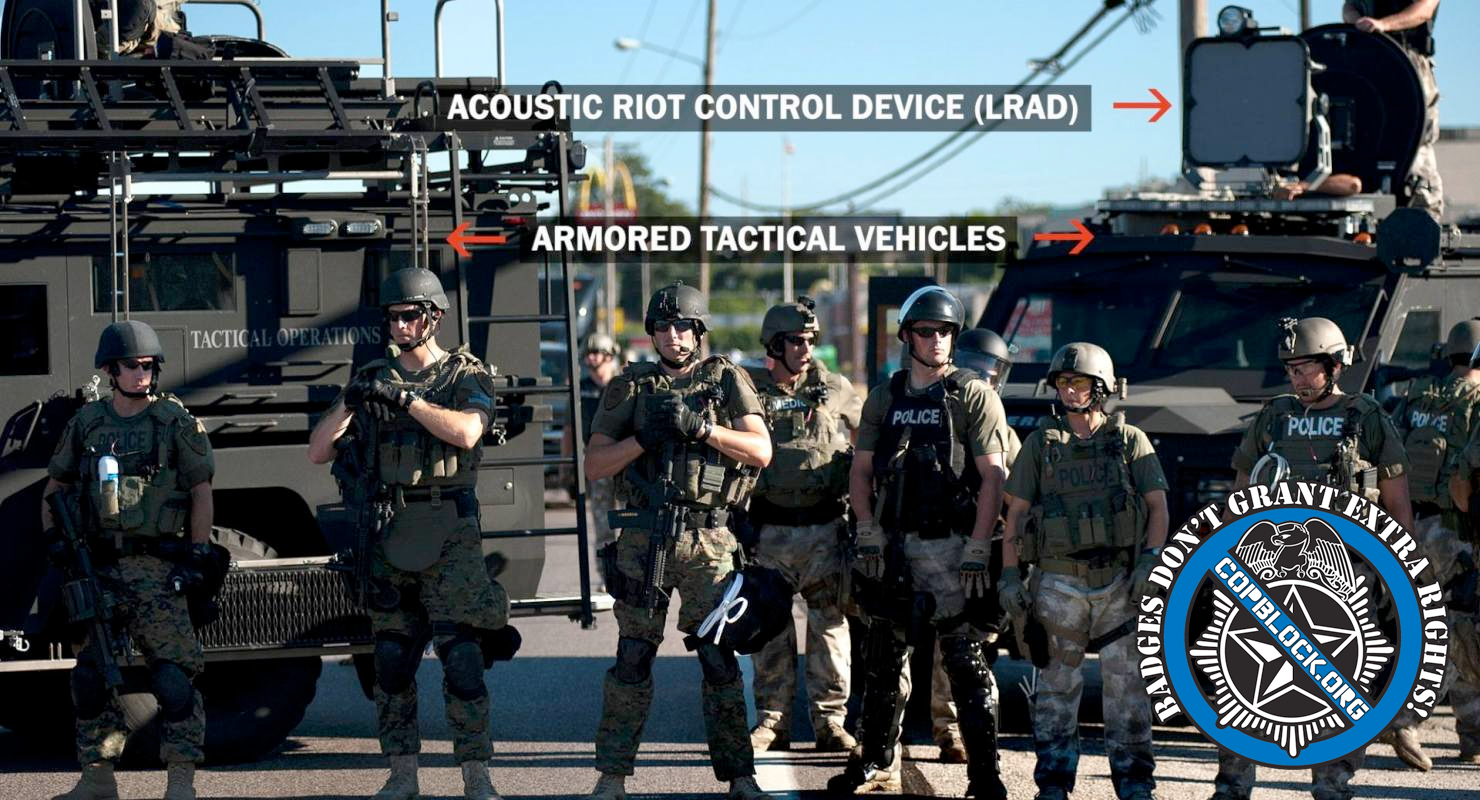 There is a constitutional consideration that has been lost in the current justice system amid its use of deadly force in this time of over-militarized police: Due Process. Due process guarantees us fair and impartial treatment under the law as a means of protecting our civil rights as Citizens of the United States. We are guaranteed our right to a fair and swift trial by our peers. How does one accomplish this when the accused has been tried, convicted, and executed by over-zealous officers and the weapons at their disposal? Frankly, it doesn’t. There’s an old saying “Dead men tell no tales”. Dead men also can’t defend themselves against false charges and are tried in the face of the media and popular opinion. Dead men have no peers to try them and no attorney to plead their case. This task goes to the grieving family, who are shamed and discredited by mainstream media who relies on their corporate sponsors. Shaming the police force is bad for the bottom line.

So how has this happened? It’s a systematic process. First, you immunize the public to violence. How many of you would voluntarily watch a snuff film and say the victim deserved it, except for that one funny guy in the group. Most would say they’d never watch such horror. Now tell me how many of you have watched the recent footage of Alton, Philando, Dylan, and others as they’ve been publicly executed. Did it even dawn on you that these videos are essentially snuff films? Did it occur to you that these people had been charged with no crime, presented no direct threat to the officers involved? None had presented a weapon and charged police. None had even fought back. How do they, then, excuse such action? They claim that they feared for their lives. Of course they did! They are trained police officers doing a dangerous job, They were “trained” to find and apprehend dangerous criminals.They were also trained to protect and to serve. At some point those lines bled into one another and the outcome is a government sanctioned death toll. Where once the purpose was to apprehend, they’re now being taught that a fear for ones life is grounds enough for public execution, that their life matters more than the person they hold at gunpoint.

Second, you make sure to antagonize peaceful protesters until they act out then put the camera on them for the world to see. “Watch as local shop is destroyed by protester”, the headline reads. Make sure not to show the face of the plain clothed cop committing the atrocity and if it does show by mistake, make sure to have another atrocity on point for distraction. Cue mainstream media outrage to silence the cries of the unrest, and get the people back in line.Police have been given the right to deadly force as a first option by the hordes who come out in their support, and by their peers who try them and find them innocent of wrongdoing. Unfortunately, their victims will have no such trial, because the officers get the final word, and that thin blue line isn’t so thin, indeed.

There have been many peaceful protests lately, in the spirit of the activism of the 60’s. (It’s worth noting that the suspect in Dallas was not part of the‪#‎BLM‬ protests. In fact, he was anti #BLM.) These peaceful protests are met with riot gear, and crowd control items such as disorienting lamps that cause convulsions, seizures, and vomiting. They’ve used fire-hoses which are extremely painful due to the force of the water. They’ve used sound devices that are also extremely painful and disorienting. These are all actions that the people we charge to protect us use as a means of shutting down our constitutional right to peaceful protest. What does corporate mainstream media focus on; the fact that protesters have shut down streets. Not the extreme force and military-grade weaponry being used on protesters asserting their rights, but inconvenience to Joe Public working man. Our own White House representatives have stated that this is not a problem. Obama, who ran and was elected on a promise of change, sees no problem. Apparently he did not mean a change for the better. Essentially we are supposed to be a proud Americans who uphold the constitution as long as we don’t dare propose to assert our rights, or question our elected leaders. If you do, you are labeled “un-American” and “Anti-cop”. This is a problem.

The most frustrating thing is that the fix really isn’t a difficult one. We must stop local police forces from investigating their own officer involved shootings. These shootings should be done on a federal level by the FBI or another agency which has no involvement with local officers. Second, should local agencies have access to military weapons, they should be last resort only and left on standby for major catastrophic events. These weapons were not designed for use outside of the war arena and it should stay that way. Lastly, police forces need re-training. Period. Somewhere along the line they’ve forgotten how to wound to apprehend and have defaulted to the kill shot. This does not serve justice, it does not support an American’s right to due process, and it does nothing to reinforce a good relationship between the police force and the public in general. People are now afraid of police and scared people are dangerous. Officers who have the trust of their community are much more likely to come home to their families. Officers who brew mistrust among the community are more likely to be killed in the line of duty. This means that the good cops, the ones who joined to protect and serve, to truly make a difference, must rise up and out the bad ones. That means join forces with other officers who feel the same. Bad cops travel in packs, good cops must do the same. Bad cops, like bullies, use intimidation to keep the good cops quiet. Raise your voices in a chorus and join with us, your community, to fight the evil that has taken root in your house and we’ll gladly have your back, as you have ours.

In closing, I’d like to leave you some things to think on, and to take forward to others as they speak up.

1) At what point did resisting arresting or walking away from police become a felony punishable by immediate public execution without the right to due process?

2) At what point did we all agree that it was okay for police officers to demand that we waive our Constitutional and civil rights as an American to question the reason for being stopped, questioned, or detained? And again, at what point did that become punishable by immediate public execution without the right to due process?

3) At what point do we admit that white privilege is a young, mentally ill white man using his weapon to shoot up a church and murder its flock, ultimately being brought into custody and being served a Burger King meal because he was hungry, and black men being shot dead by police for simply having a gun on their person, having not used it?