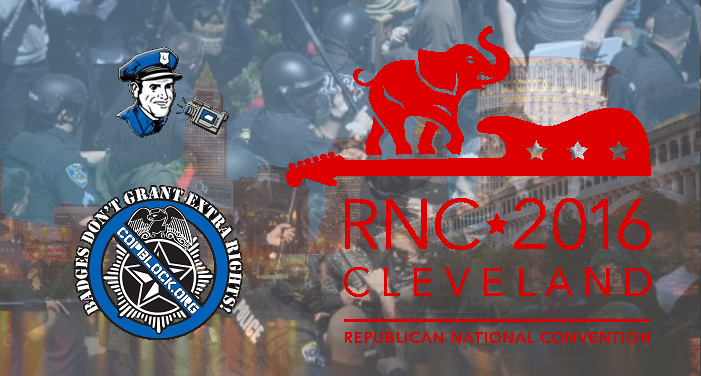 This post is the meta post for text updates, live streaming videos and more from Kelly, Josh, DEO and Ademo who are on the ground at the RNC all week long. You can keep up with breaking feeds at the CopBlock, Greater Cleveland CopBlock or Cell 411 Facebook pages but below host personal feeds of the crew as well.

Scroll down for earlier in the week.

Update #1: Team worked late into the hours moving footage, updating post and recharging gear. With the anticipation of Trump’s arrival in Cleveland the team has decided to get a late start and broadcast later into the evening. Livestreams will start in about 1 hour. (current time 1pm)

Update #2: Opening day three. Ademo Josh and Kelly head downtown. See Livestream video here.  A fight broke out between a man and another person who was trying to burn a flag. Instigator was arrested.

Update #3: The crew has their backpacks illegally searched by some cops claiming they are not allowed to have bags that big, yet Ademo was detained Monday with the same bag and it was not a problem. In the end they fascist scumbag Cleveland police steal the backpack while people walk all around them with backpacks on, but theirs don’t say fuck the police so they are ok. See Kelly Paterson’s Livestream video here. Ademo’s Livestream video here.

Update #5: Police protect Cleveland from a dangerous, illegal tennis ball. A girl from Minnesota was very aggressively detained and threatened with arrest because she had a tennis ball in her hand, which for some ridiculous reason is on the list of prohibited items at the RNC. She was eventually released, although they stole her ball. See Kelly Patterson’s Livestream video here.

Final Update: Crew stayed until midnight, to which there were more police than anything. Ubered back and called it a night.

Update #1: At 2 pm today the crew will be back on the streets providing live coverage from #RNC2016. See the following Facebook pages for live feeds and breaking updates;

Update #2: Heading down to the RNC for day 2! See Livestream video here.

Update #3: Ademo has conversation with people on the streets about the “Fuck Your Badge” sign he is holding. The other side says, “You do not need a badge to protect people. You do need one to protect the government!”

Update #4: Alex Jones was ran out of the “free speech zone” after being attacked by protestors. Vermin Supreme is also at the RNC too!

Update #7: Ademo was assaulted by a woman and then had his “Fuck your badge” sign destroyed by a random man. At least a dozen cops stood by and watched Ademo get assaulted but rather than rely on police, Ademo talked to the man for several minutes and got the man to reimburse him for his damaged sign! Josh Hotchkin’s camera captured the conversation although the religious zealots behind them kinda drowned out the audio.

Josh’s Livestream can be seen here. LAST UPDATE: Night ended with little to no altercations. Many gathered in Cleveland Public Square and engaged in civil conversations. More to come tomorrow.

Update #1: It’s a little before 8 am and the team is packing up their gear, extra batteries and video camera to make the trek downtown. There are six of us since “The American Intelligence Report’s” own Kristan T. Harris will be joining us as well. We expect to be downtown around 11 am, stay tuned. See Livestream video here – Ademo

Update #2: The crew chalking in front of the main entrance to the RNC. See Livestream video here.

ADEMO’S VIDEO FROM BACK OF CAR: Update #4: This is what a police state looks like! See Livestream video here.

Update #1: Heading out to purchase additional battery packs, poster material, water, snacks and more. Kelly arrives in about two hours and Josh got in this morning. Will update during brainstorm meeting this evening. – Ademo

Update #2: Went downtown to scope out the area and travel routes. Took the livestream video below via Greater Cleveland CopBlock.