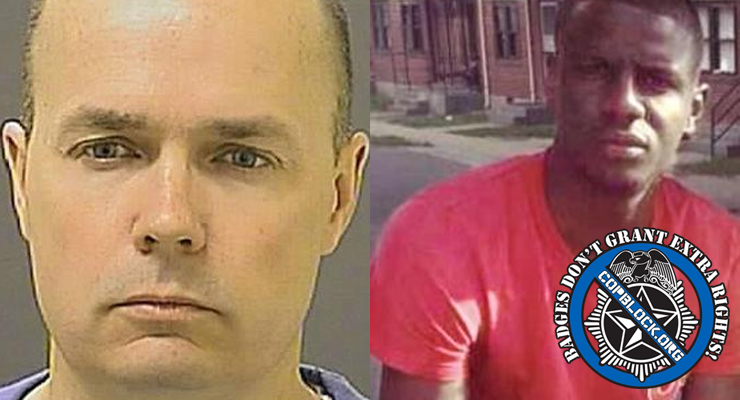 From The Baltimore Sun

Prosecutors in Baltimore have failed for the fourth time to secure a conviction in the Freddie Gray case, with Circuit Judge Barry G. Williams acquitting Lt. Brian Rice of all charges related to Gray’s arrest and death.

Williams cleared Rice, 42, of involuntary manslaughter, reckless endangerment and misconduct in office in a downtown Baltimore courtroom on Monday morning. The judge had dismissed a second-degree assault charge at the trial’s midpoint, and prosecutors dropped a second misconduct charge at the start.

Rice selected a bench trial rather than a jury trial, putting his legal fate in Williams’ hands. He was the fourth of six officers charged in the case to go to trial.

Williams said prosecutors had failed to meet their burden of proving the charges beyond a reasonable doubt, instead asking the court to rely on “presumptions or assumptions” — something it cannot do. He said the court “cannot be swayed by sympathy, prejudice or public opinion.”

Based on the law, he said, the prosecution failed to prove the elements of the crimes.

Williams said a “mistake” or an “error in judgment” by Rice was not enough to prove the crimes alleged. He also briefly noted the difference between criminal negligence and civil negligence, an apparent nod to the fact that the city previously negotiated with Gray’s family attorney, William H. “Billy” Murphy, on the civil side and agreed to pay the family $6.4 million.

Williams previously acquitted two other officers — Edward Nero and Caesar Goodson Jr. — of all charges in May and June, respectively. A fourth officer, William Porter, had a mistrial in December after a 12-member jury could not reach a consensus on any of the charges against him.

Photos from the trial of Lt. Brian Rice, the highest-ranking Baltimore police officer charged in the arrest and death of Freddie Gray.

Rice’s acquittal is likely to renew calls for Baltimore State’s Attorney Marilyn J. Mosby to drop the remaining charges in the case, including from the union that represents the city’s rank-and-file officers.

After the acquittal of Goodson, the driver of the van in which Gray sustained a fatal injury, Lt. Gene Ryan, president of the Fraternal Order of Police Lodge 3, said that it was “time to put this sad chapter behind us.” He said ongoing prosecution of the cases would hinder the ability of police in Baltimore to do their jobs.

Prosecutors and defense attorneys in the case are barred by a gag order from commenting. Williams also does not comment on cases outside of court.

Prosecutors alleged Rice, the highest-ranking officer of the six charged, had caused Gray’s death by failing to secure him in a seat belt in the back of the police transport van in which he suffered severe spinal cord injuries last year. Gray, 25, died a week after his arrest. His death sparked widespread protests against police brutality.

Deputy State’s Attorney Janice Bledsoe, during closing arguments in the case, said Gray’s death “cannot be blamed on poor judgment or error,” and that Rice’s intentional actions “put together formed a chain” of events that caused Gray’s death.

Rice’s defense attorneys said his actions were reasonable given the volatility of the scene at the time, Gray’s combativeness and the danger associated with placing a detainee in a seat belt in the close quarters of the van’s rear compartment.

“Everything about it was professional, correct,” said Michael Belsky, Rice’s attorney.

Williams had seemed skeptical of the basis of the charges during closing arguments Thursday, asking Chief Deputy State’s Attorney Michael Schatzow whether the prosecution believed that the failure to seat belt Gray was in itself a crime.

“The simple fact he didn’t do it means he’s guilty of these crimes?” Williams asked.

Schatzow said it did, based on the circumstances. Belsky said the prosecution’s theory, if upheld by the judge, would set a “very dangerous precedent.”

On Monday, Williams noted that both sides had argued about the circumstances in which Rice made his decision not to secure Gray in a seat belt. He said both sides wanted him to view the atmosphere — the prosecution said the officers were not being threatened, the defense said it was a volatile scene — in a “vacuum,” but that he had to view it in context.

He quoted individuals heard yelling at the officers on a cellphone video of the scene, and said it was clear to him that “emotions and tensions ran high” that day. He said it was “a matter of perspective” as to the threat and need for officers to leave the scene quickly, and that Rice’s perspective was important.

He quoted one person as saying, “Smoke this dumb—,” and another as saying, “I’ll bust all three of them.”

Williams also found that prosecutors had failed to establish Rice’s level of training or his awareness of a policy put in place days before Gray’s arrest that removed an officers’ discretion in deciding whether to secure a detainee in a seat belt — instead requiring it. He noted that part of that failure may have stemmed from his decision to block some evidence of Rice’s training based on a discovery violation by the prosecution. But he also said the violation of police general orders is not a crime.

Like in Nero and Goodson’s trials, Williams delivered his ruling by reading from prepared remarks from the bench. He took the charges one by one, outlining the elements required for each and his reasoning for finding Rice not guilty.