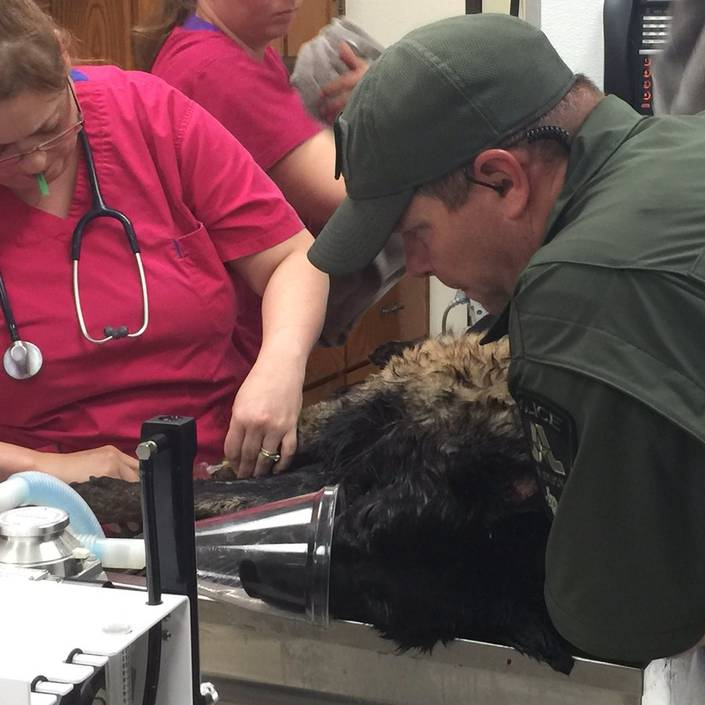 They can call it whatever they want, but Officer Ramsour of the Arlington Police Department killed his K9 partner, Mojo. Not with a gun or some other weapon, or even his hands, but by allowing Mojo to continue to try to please him when the scorching heat begged for extreme caution. A dead K9, and in all likelihood, Officer Ramsour will see no consequences for his actions. More likely, he will treated as an innocent victim.

At about 10:00AM, Officer Ramsour was called to bring his K9 to assist in finding a suspect on the run for a previous alleged aggravated assault. At 11:15, Officer Ramsour called in for water and transport as his K9, Mojo, who had become visibly overheated. Arlington officers rushed Mojo to his regular vet, then to an emergency facility by squad car “Code 3”. After IVs, and a blood transfusion, Mojo was pronounced dead at about 2:30PM.

Texas in July is about as hot as hot gets. High temperatures with drenching humidity. On July 19th, the temperature hovered around 100 degrees with a heat index well above. Schools, businesses, and the news regularly talk about the dangers of the heat. Athletics programs constantly adjust practices for the safety of the athletes. During a normal Summer locally, July and August are exceptionally dangerous. Heat exhaustion and death are fairly common on the news. Today was by no means an anomaly.

The heat also overtook several officers, who roasted inside heavy body armor in the summer heat. Arm bandages showed where medics re-hydrated officers with IVs. If so many officers were being treated medically due to the heat, why didn’t Officer Ramsour at least have water for his K9? Why wasn’t Mojo given the same consideration as his human counterparts? Especially considering Mojo should have been given special consideration since he was a “senior” animal.

While many other people want to excuse this as an unfortunate incident involving a dog just doing his “job”, that would imply that the dog had ANY say in the situation. Anyone who has ever owned a dog know that a dog lives to please. Just because my dogs would run with me until they fell over dead, I know that I have to be careful and monitor their activities. Mojo wasn’t doing a “job”. Mojo was out to please Officer Ramsour…no matter the cost.

We have already seen the barrage of sympathy for Officer Ramsour and the department for “losing” an officer in the line of duty. “Losing” would imply that something unexpected happened. That all necessary precautions had been met. We have even seen people saying they should charge the suspect for his death. The K9 will deservedly get the send off he deserves, but there will likely be no justice.

Even in the police statement about his death, they effectively gloss over the cause of death, and put the focus on the guy Mojo was searching for when he died. If you go to the Arlington PD Facebook page, you can see the outpouring of sympathy for the officer and the department that killed him. This includes comments from many brothers of the Thin Blue Line.

Let’s look at this from the other side. How would this be handled if you or I had done anything like this?

“I know the handler personally. He loves that dog, as does the whole police community here.”
“That’s his family,”. “[He’s] been with this dog five years, at least, maybe longer. They work and live together. Dog goes home with him each and every day.  It’s a unique and close relationship. He took it hard.” “

If you ran your dog to death, would you get a pass if it was a known fact that you “loved that dog”? Would we get any sympathy if they thought we “took it hard”? We see it all the time here where people come out of the wood works with pitchforks and torches (as they should) when they see a dog locked up in a car during the Summer. The police come, they smash out the window and save the dog. Then they immediately proceed with charging the owner with abuse, neglect, endangerment and anything they can come up with. Much worse if a dog dies. What are the chances anything will happen to Officer Ramsour?

Then there is the whole emergency transport this dog received with the “CODE 3” to the emergency facility. This wouldn’t be a thought if it was a generally accepted procedure, but it isn’t. What do you think 911 would tell you if you called for emergency transport for your dog? Even if you were able to flag down an officer as it was happening, do you think that cop would give YOUR dog the “CODE 3” treatment? In Carrollton, I have seen on multiple occasions where a cop would tow a vehicle a female passenger was in during the late night/early morning hours, and they would not provide any assistance to them other than giving them directions to walk. If they will do that to young women, I have no doubt that would laugh at the idea of helping you save your dog.

After all is said and done, Mojo died trying to please his handler. Not “doing his job”. Not in some freak accident. Mojo died at the hands of Officer Ramsour who didn’t take all the necessary precautions to make sure he would be there to make him happy another time.

Click on picture below for another story on K9 deaths