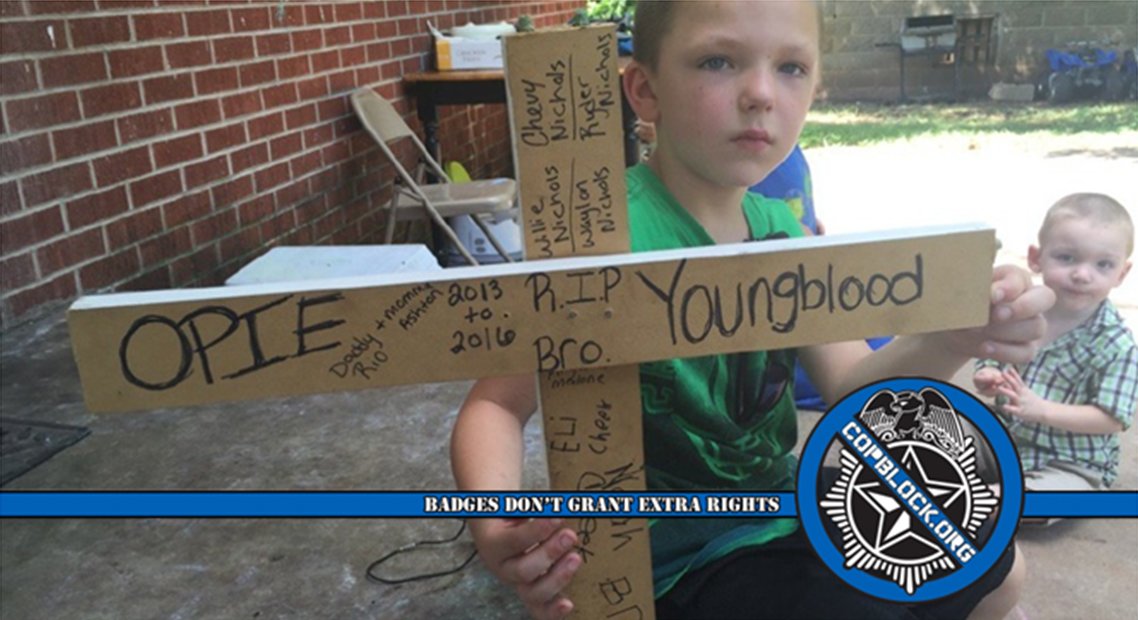 An Oklahoma family says a Wynnewood police officer unnecessarily shot and killed their five-year-old son’s dog, Opie, in front of him and other children at his birthday party.

According to police, the officer was attempting to serve a warrant on someone who had listed the address of Vickie Malone and her family as his last place of residence ten years ago. Malone said the cop never produced said warrant, even after Opie was dead.

The mother recalled that she had just taken her son Eli and his friends inside from where they had been playing to eat birthday cake and ice cream. She was about to serve it when a bang came from outside.

Malone said she and the other adults ran outside to see what was going on and found Opie near the fence that surrounds her yard “kicking and gasping for air.”

The officer claimed the three-year-old American Bulldog and Pit Bull mix was vicious and attacked him by coming around the corner of the house but video depicting the aftermath of the shooting showed the dead dog lying near the fence, not the house.

According to police chief Ken Moore, the officer said he tried to kick the dog off him and then used a high-powered rifle that he retrieved from his police vehicle to shoot it once.

He then apparently fired two more shots from the rifle in front of the children in order to put the animal out of its misery. He showed no remorse about the killing, and didn’t apologize, according to Malone.

Malone said the death of the animal could have easily been avoided by simply doing some fact checking on the warrant, and that her five-year-old son misses his pal.

Eli made a small wooden cross to mark where Opie is buried in the backyard and said it hurts to loose a friend that he used to have fun running around and playing tag with.