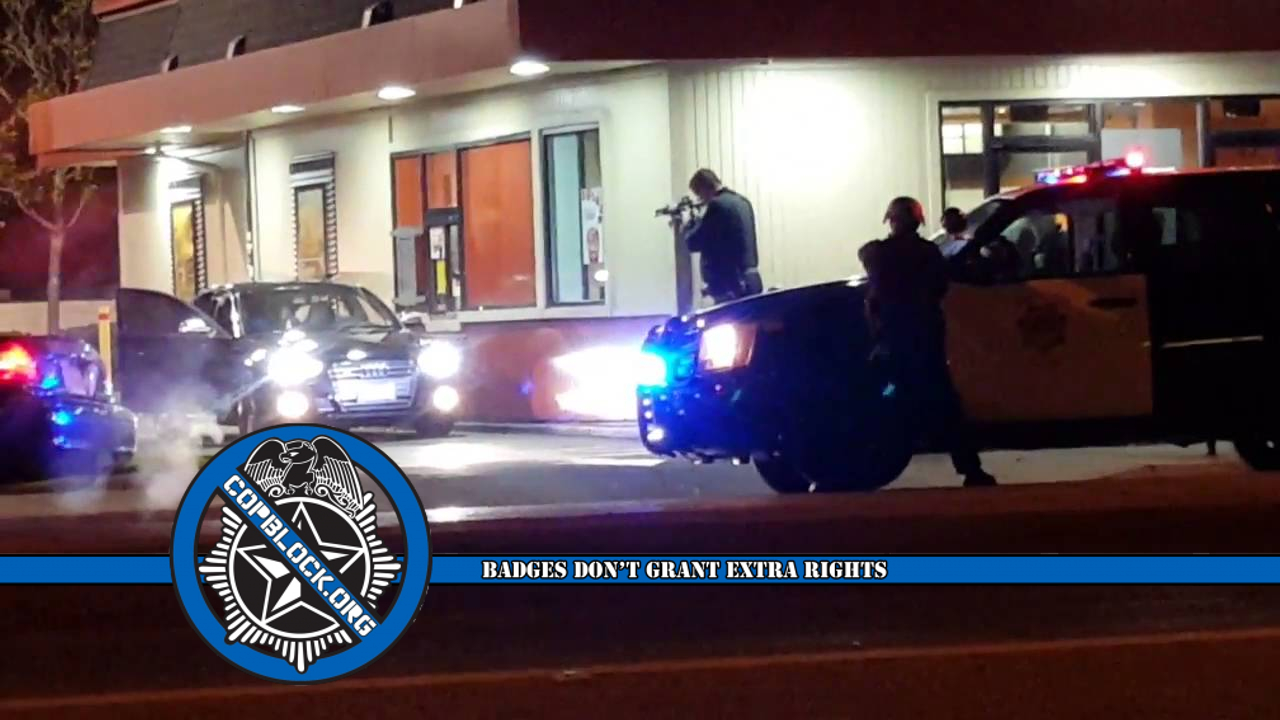 A video submitted anonymously from LuberLateNights YouTube channel show a Sheriff’s Deputy being arrested for driving drunk, after he pulled a firearm on a Jack in the Box night manager. According to the YouTube description, an employee was in the middle of a mental breakdown and decided they no longer wanted to continue working. This angered Deputy Benjamin Lee, who was trying to quench a violent case of the drunk munchies, prompting him to pull a firearm out at the window and demand his order.

The video was recorded by an Uber driver. The Uber driver was at a Jack-n-Box with passengers around 2:10 am on 1/10/16 and was 11th in the drive thru line to place an order. After 10 minutes of not moving in line, the manager of JNB comes out notifying each car individually that the cook was having a mental breakdown of some sort & did not want cook anymore. Deputy Lee was second in line to receive his food.

After the Uber driver was told by the manager about the situation, the Uber driver drove away. Later, after getting food at another JNB down the street, they passed by the original JNB on 911 El Camino Real in Santa Clara. At that point, the Uber driver noticed the Audi, (Lee’s vehicle) was surrounded by officers and recorded the video. At the time, the driver did not know Deputy Lee was the one being arrested at gunpoint for brandishing his firearm and driving drunk. Lee was allegedly upset the cook was having a mental breakdown and demanded to get his food. After the cook refused, Lee pulled his gun on the cook & manager. Lee was arrested by Santa Clara police around 2:40 am for brandishing his weapon & “allegedly” driving drunk. In the video, you can see that indeed, Lee was intoxicated.

Employees quickly called police and multiple officers arrived and instigated an armed standoff in the drive-thru. During the standoff, Deputy Lee can be heard saying “I’m drunk, I don’t know what you want.” And can be seen walking toward officers with his hands raised. Similar behavior has resulted in multiple people being killed by officers. Refusing to follow an officers commands is one of the main reasons people get shot, unless of course you are a cop. A cop would never make another cop fear for their life, even if they are armed.

Deputy Lee has been placed on administrative leave pending an investigation into his actions to determine whether or not any charges will be filed. Of course that is a privilege only extended to those who wear a badge. If a regular servant of the empire was caught committing assault with a deadly weapon they would be caged, convicted and sent to prison for years.

Deputy Lee’s behavior offers a much needed insight into law enforcement culture that has fostered a breed of adult children. These overgrown children are unable to take no for an answer and throw violent temper tantrums, that result in serious injury and death, whenever things don’t go their way. If this is how the Deputies of the Santa Clara Sheriff’s Department are conducting themselves off duty, imagine how they are treating people while in uniform.

There is no place for people like this in law enforcement and if you agree that Deputy Benjamin Lee’s behavior is unacceptable and he should be charged with a felony. Please call the Santa Clara Sheriff’s Department or leave a public comment on their Facebook page or Twitter account.