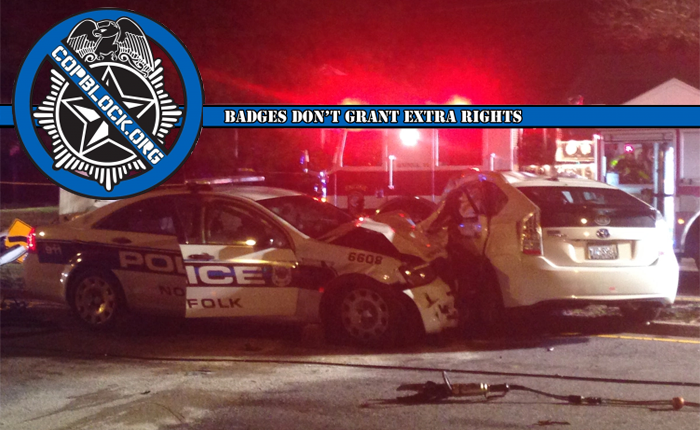 “The impact was very loud. It seems like it shook the house to the point where you brace yourself like, ‘is something about to come through the house?” It sounded like a big large pop.”

That was how the May 7, 2016 crash that killed 79-year old Robert Crittsinger was described by a man who heard it happen and witnessed the aftermath. It was an accident the Norfolk Police Department (of Virginia) initially said occurred when one of their officers “was traveling south on Hampton Boulevard when a Toyota Prius pulled out from Surrey Crescent and collided with the cruiser.”

Now new details exposed by a city councilman during a public meeting show that it was actually the NPD officer who was at fault, and not the deceased victim.

According to the Virginian-Pilot, “Paul Riddick said the police chief told him an investigation found that the officer was going 72 mph at the instant his marked cruiser collided with a Toyota Prius, driven by Robert Crittsinger.”

The article describes how the still unnamed officer crossed paths with Crittsinger that night:

Just after 10 p.m. May 7, the officer had been dispatched to a call for a gunshot victim near the corner of Colley and Graydon avenues in Ghent, police said at the time.

The crash happened north of Old Dominion University at the intersection of Surrey Crescent, more than 2 miles from the shooting. The officer, whose name police refused to release, was coming from farther north.

The NPD officer was racing along Norfolk’s streets at speeds up to 96 MPH. This is despite the fact that: “a Norfolk Police Department general order issued in 2014 says officers on emergency calls should not exceed speed limits by more than 15 mph, except during pursuits. The speed limit on that stretch of Hampton Boulevard is 35 mph, and there was no police pursuit that night.”

Even though the police department already knows that their officer blatantly violated their policy regarding proper speed, and certainly knew this back in May, the issue is reportedly still “under investigation.” The department refuses to even say whether the involved officer has returned to work.

It seems extremely unlikely that an ordinary citizen who caused a fatal accident while recklessly traveling at nearly three times the posted speed limit would experience this sort of protracted investigation and considerate delay of criminal charges.  Fortunately, we don’t need to speculate on that matter.  The auto enthusiast website, Jalopnik, has covered Virginia’s treatment of reckless drivers extensively.

From an article by Patrick George, who served three days in a Virginia jail for reckless driving during his test drive of a Camaro ZL1:

Reckless driving is not a traffic citation, it’s a criminal charge, and a Class One misdemeanor at that. That means it’s the highest level of misdemeanor you can be charged with in Virginia, right below a felony. The maximum penalty for a reckless driving conviction is a $2,500 fine, a six month driver’s license suspension, and up to a year in jail.

They hand it out like it’s Halloween candy, too. You drive 20 mph over the limit, it’s reckless driving. They even charge you with it for failing to properly signal, or when you’re found to be at fault in a car wreck. I’ve heard of some cases where people get 30 days in jail if they speed over 100 mph.

Other Class One misdemeanors in Virginia include animal cruelty, sexual battery, and aiming a firearm at someone. This is how the commonwealth regards people who drive over 80 mph.

Another Jalopnik article gives an idea of how frequently Virginia slaps this charge on drivers who have not caused deadly crashes, or even any accident at all:

During the 2014 Thanksgiving weekend, Virginia State Police cited 2,312 people for reckless driving and 9,789 people for speeding. That’s not even including all the tickets issued by local sheriff’s offices and police departments. The summer holiday weekends can have even higher numbers, with 2,673 reckless driving tickets issued by the State Police from July 4 to July 6, 2014.

The unnamed Norfolk police officer who killed Robert Crittsinger was:

Since this officer broke the law and violated department policy, reckless driving should be the least criminal charge he will face. That would still not be sufficient since his negligent actions took the life of an innocent bystander. The most appropriate case here would be aggravated involuntary manslaughter due to conduct “that was so gross, wanton and culpable as to show a reckless disregard for human life.” The punishment for this class 5 felony in Virginia is “a term of imprisonment of not less than one nor more than 20 years, one year of which shall be a mandatory minimum term of imprisonment,” and automatic revocation of one’s driver’s license.

We shall see whether blue privilege shields this officer from facing the consequences of his deadly reckless driving.

Meanwhile the only statement of responsibility Crittsinger’s surviving family will likely ever get has already come from Paul Riddick, the city councilman who took the department to task for acting “like it never happened.”

As for the deceased Crittsinger, perhaps he is resting easy in the afterlife knowing that he helped provide an extended paid vacation for a police officer, and that the officer will likely retire with a handsome pension— According to the Virginian-Pilot, his house bears “a sticker showing Crittsinger’s past support of the Norfolk Police Pension Fund.”

Helpful readers reminded me of Virginia’s Ashley’s Law, enacted in 2011 after Ashley McIntosh was killed by Fairfax County police officer Amanda Perry, who raced through an intersection without her siren on. The law requires “emergency responders to use their flashing lights and sirens when entering an intersection against a red light or else yield to traffic.”

As the Virginian-Pilot reports: “A release said the officer had “emergency equipment” activated but did not specify whether that included both lights and siren.” Ashley’s Law doesn’t apper to be in effect here since there is no traffic light at the intersection where Crittsinger was killed. However,Virginia law does specify that emergency responders must show “due regard for safety of persons and property” while traveling above posted speed limits.

Additionally, a Facebook commenter brought up the impact of the vehicle’s speed on siren effectiveness:

“You need at least 75dBA of siren level to be audible through rolled up windows and over the car radio. In reality it might have to be 20dB higher if it’s a boom car, or a Mercedes, or some other vehicle with very good sound isolation. The maximum warning distance you can get with a siren that begins with a 100dBA at 10′ is about 160′.

At 30 MPH (44 ft/sec) closing speed that gives you about 4 seconds of warning for drivers ahead of you. At 60 MPH (88 feet per second) closing speed that only gives you 2 seconds of warning time. That’s just the warning time for someone to begin to hear a siren, they still have to react and try to locate the emergency vehicle and then do something about it.”

Furthermore, from EVOC and EMS:
“Included in my EVOC instructor’s manual is the statement that a 100W electronic siren has only 12 feet of forward penetration at 60MPH. I haven’t done the true research to see where this came from, but I feel confident that our Commonwealth wouldn’t have me deliver this information if someone hadn’t looked into it.”