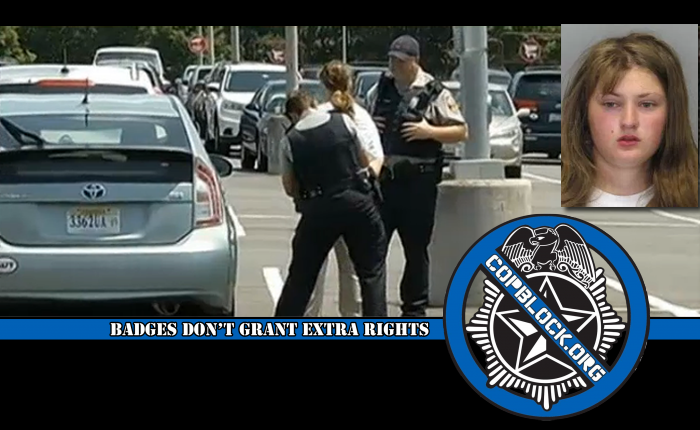 On Monday July 25, 2016, 19-year-old Megan Kurtz Campbell was arrested and charged with felony animal cruelty for leaving her dog in a hot car outside of a PetSmart in Falls Church, Virginia.

According to a news release from the Fairfax County Police Department:

Police and fire personnel responded to the PetSmart located at 6100 Arlington Boulevard, around 12:23 p.m. for a report of a dog locked inside of a vehicle. Firefighters arrived and immediately determined that the dog was in distress. They entered the vehicle and attempted to cool the dog down but were unsuccessful. The firefighters then transported the dog, a 5-year-old Puggle, to the veterinarian’s office inside the PetSmart, where the dog was pronounced deceased.

Leaving an animal to suffer and die horribly in a hot car is inexcusable and deserves punishment, but a felony seems excessive. If convicted, Campbell will lose not only her voting and second amendment rights, but will also have her ability to even earn a living drastically reduced. Aside from having to disclose her felony conviction on most job applications, she will also be cut off from positions requiring occupational licensing, which, in Virginia includes even interior decorators and nail technicians.

Perhaps justice would be better served by a lesser charge and a substantial number of community service hours where she could toil outside in the hot sun to experience some of the distress her dog experienced locked in the car in 100-degree weather and/or help care for an rehabilitate neglected and mistreated animals at a shelter. That option is more likely to result in rehabilitation than permanently impacting her ability to be a contributing member of society.

Using the Officer Down Memorial Page  and Police K9 Handler Review Facebook page, I found reports of sixteen K9s who have died due to the actions of their human handlers this year:

Yet another dog is mysteriously missing and a police officer has been fired for trying pass off another dog as the missing K9.

What has become of these human handlers? The vast majority certainly haven’t experienced the on-site arrest and felony charge that Megan Kurtz Campbell received. Examining only the nine cases involving dogs left in hot cars, I found four that resulted in criminal charges.

As of July 13, the Alachua County Sheriff’s Office was still investigating the death of K9 Robbie, but details of his handler’s past behavior makes one wonder why he was ever entrusted with another dog:

…Willcox kept Kozar, his second K-9 partner, after the dog retired. He was put down by a gunshot from Willcox during a K-9 training activity in 2008. Kozar was 13-years-old and was suffering from hip dysplasia and other medical concerns. Willcox faced criticism for this, but after an investigation, it was determined that no criminal violations were committed.”

This review shows a disturbing continuing trend of K9 handlers killing the dogs that were entrusted to their care through callous disregard and, in some cases, intentional malice, and going mostly unpunished for their actions.

If we’re handing out felony convictions and harsh sentences for letting dogs die in hot cars, that’s certainly what these cops deserve in spades. They are, after all, the ones who want people who kill police dogs to be treated the same as if they’d killed a human officer.