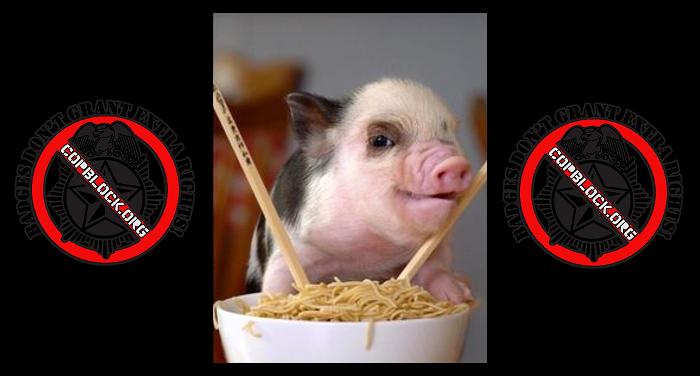 In the workplace trope that (thankfully) refuses to die, another service employee has put their integrity, dignity and principles first – and most likely sacrificed their job in the process.

An unnamed employee at a Noodles & Company restaurant in Alexandria, Virginia took a stand on Monday and refused to cook the meal of a uniformed officer who visited that location.

According to a local Fox News affiliate:

At around 6:30 p.m. Monday evening, a female officer in full uniform walked into the Noodles & Company on Duke St. in Alexandria when she was refused service while waiting in line, according to officials. The cook at the restaurant came out of the kitchen, walked to the cashier and said something in the lines of “you are going to have to take me off the line, because I am not serving that.” The cashier and the cook then exchanged a few words and started laughing at the officer. The officer decided to leave the restaurant when she realized what was happening, called her supervisor.

In an interview with Alexandria Police Chief Earl Cook, he said, “”Well your first response as a police officer is anger, these are very difficult times right now with our relations with everyone and to have one of my officers treated in that manner unnecessarily, your first response is anger then you calm down a bit as usual let’s find out what happened and as we have talked to our officer and talking to the store management it seems to have happened as my officer stated.”

The chief was upset enough to go over to the Noodles & Company where the incident occurred.

A statement from the company reads:

“Noodles & Company expects the highest ethical and personal behavior from its team members. We value each of our guests and are committed to treating everyone with dignity and respect. We do not tolerate any form of discrimination.

We are working with the appropriate authorities and local police association representatives to get to the bottom of, and resolve this matter as quickly as possible. We have made efforts to reach out to the police officer involved, but have not yet spoken with her.  We will continue to look into the situation and will take the appropriate actions at the conclusion of this review.” – Noodles & Company

FOX 5 also spoke with a union representative. “It appears that there is maybe just a couple of bad seeds and the Noodles and Company business will be handling that internally Noodles and company has agreed to post signs on their doors that they support blue lives they’ve been very cooperative with us in this matter and we hope they continue the cooperation we hope that the business is not judged by the actions of a couple of individuals,” said Pete Feltham, Alexandria Police Union.

At this point it is not clear what Noodles & Company has done, with either the cook and or the cashier.

[Yet Another Restaurant Employee Under Police Fire For Enforcing Rules]

I then went on to discuss the phenomena and offer some thoughts and advice to anyone considering following the lead of these brave souls.

Should You Personally Refuse Service To Police Officers At Your Workplace?

So it is of little surprise that those who have been forced into soulless service industry jobs by oligarchal economic paradigms for very little reward are starting to fight back. Police represent not just a poor return on their forced investment, but are also the whip-bearers working on behalf of the economic powers that have created this endless cycle of consumption for profit. When the working poor pour out into the streets to fight the forces of their oppression, who will be there with rubber bullets, tear gas and paddy wagons…or worse? The police are not just more harsh on you the poorer that you are They are the thin blue line that protects the ruling class by keeping you in your place. Police are the Uncle Toms on the plantation of the modern working poor. They are the sellouts who serve to create a barrier between the few who have us all enslaved on some level.

This is where I could suggest that we boycott Noodles & Company, but we all know that it is not going to do any good. A snake is a snake and you knew that when you picked it up. Rather than place the blame where it makes no difference, I suggest we question everybody who cowered from their negative feelings about policing and served them just to get along. If they were to join the ranks of the brave few who said “NOPE” then instead of seeing signs on the door that say “We support the thin blue line.” – we might see the following signs.

Due to the harassment by police of those in the lower socioeconomic classes who work at jobs like those we offer, we are unable to find employees willing to serve police, and effective immediately ask that they no longer visit our business. While our benefits and pay may not be the best, we do respect the principles, integrity and dignity of those who work for us; and therefore refuse to subject them to servitude to their abusers. We welcome police to rectify the situations they have created, and once goodwill has been made, we will reconsider opening our doors and hospitality to law enforcement officers once again. The ball is in your court – until then, pack a lunch.