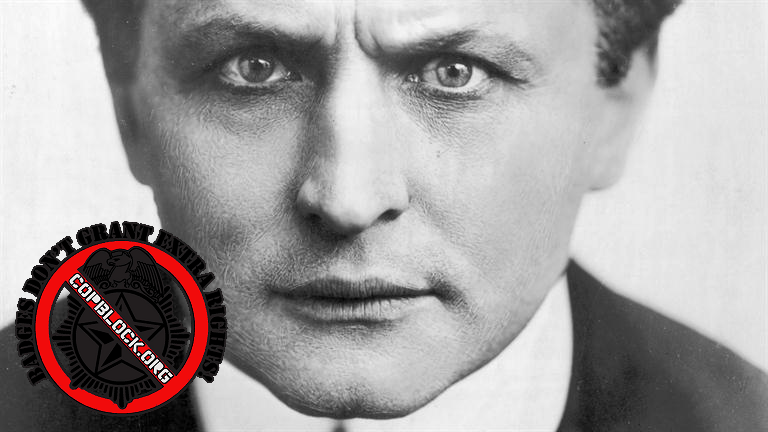 The coroner who examined the body of Freddie Gray declared his death was the result of a homicide. Today the last three police involved in the arrest during which he died were cleared of all charges.

Strange things are afoot, my friends. Mysteries upon mysteries.

But don’t worry, ya’all, because as impossible as a homicide that nobody committed is, there may be an explanation after all. Now this might sound crazy, although not as crazy as a single party homicide, but the famous but long dead Harry Houdini is likely the person responsible for Gray’s death.

Where did I get this information? Directly from Houdini himself.

A few hours ago I gathered with a Secret CopBlock Coven to perform a seance. My hope was that we would connect with Gray himself to get his version of events, but something even more amazing happened.

Speaking through my cat, who is a trained spiritual medium, Houdini revealed his identity before confessing to the murder of Freddie Gray.

“I am the party responsible for the death of Freddie Gray. I was attempting to re-enter the land of the living and sought out someone who was completely alone, secure and out of sight. That is when I found him in the back of that paddy wagon. But as I tried to possess his body he was racked with convulsions that resulted in the injuries that led to his death. Although I did not mean to, I killed Freddie.”

After this my cat began convulsing and I thought perhaps Houdini was trying to take control like he had with Gray, but it ended up just being a hairball. The magician had left the cat.

Now I know what you are thinking. A seance is not really a reliable source of information about crimes and justice, and you are probably right. But after today I think we can all agree that they are a hell of a lot more reliable than our courts.