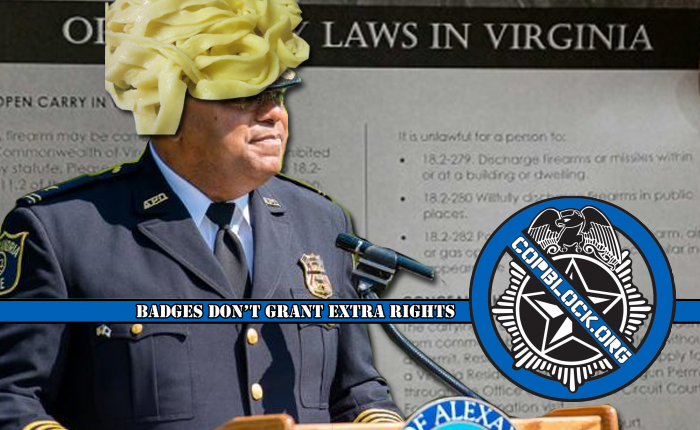 In an incident previously covered by Josh Hotchkin, a Noodles & Company employee allegedly refused to provide service to a uniformed officer with the Alexandria Police Department of Virginia on Monday, July 25.

As reported by Fox5DC:

At around 6:30 p.m. Monday evening, a female officer in full uniform walked into the Noodles & Company on Duke St. in Alexandria when she was refused service while waiting in line, according to officials. The cook at the restaurant came out of the kitchen, walked to the cashier and said something in the lines of “you are going to have to take me off the line, because I am not serving that.” The cashier and the cook then exchanged a few words and started laughing at the officer. The officer decided to leave the restaurant when she realized what was happening, called her supervisor.

Instead of going to another restaurant (might I suggest Chick-fil-A?) to get her lunch, the offended cop called her supervisor. Why? To discuss their options for arresting the chef and cashier on bogus contempt of cop charges? To make arrangements for an impromptu regulatory raid? To get talked down from going back in and shooting the place up because she feared for her ego?

Whatever the reason for the supervisor call, word soon got back to Alexandria Police Chief Earl Cook, who told Fox5DC, “Well your first response as a police officer is anger.”

He also said “that given recent anger directed toward police across the country, ‘we are all sensitized to being careful and being safe.’ In that case, he should be happy to see people offended by police misconduct and abuse expressing themselves by peacefully ostracizing police officers rather than turning to violent retaliation.

Even though APD leaves 56% of violent crimes, and 87% of property crimes unsolved, and reported 91 untested rape kits sitting on its shelves in the mandatory statewide audit last year, Chief Cook made a bee-line down to Noodles & Company the next day to make sure restaurant management started towing the thin blue line again.

.@AlexandriaVAPD reported 91 untested rape kits last year. Someone should have told them there were noodles inside. pic.twitter.com/qOoB7wIiZ4

His outrage over what he, police union heads, and cop apologists have characterized as a discriminatory denial of service at a private business stands in stark contrast to his own department’s previous efforts to encourage private businesses in Alexandria to refuse service to a specific segment of the population.

In December 2014, officers with the Alexandria Police Department were observed attempting to misinform the public and manufacture hysteria around lawful gun owners who had committed no crime.

An email from the Virginia Citizens Defense League (VCDL), a statewide Second Amendment organization, informed its members of the following:

Unfortunately for the police, a VCDL member was present when they came into a restaurant this morning, handed a flyer to the owner, and chatted with the owner for a few minutes.

Afterward, the restaurant owner showed the VCDL member the flyer and said that the police told him that he didn’t have to allow open carry and if he saw somebody doing so, he could call the police!

Not only did the Alexandria Police Department attempt to create an unwelcoming atmosphere for people exercising their constitutional right to keep and bear arms, they also set the stage for law-abiding people to be shot and killed by cops.

The email continues [emphasis mine]:

“The flyer particularly endangers 18 to 20 year olds as it incorrectly tells a store owner that if they see someone under 21-years-old with a handgun on their hip, that is illegal! That is NOT true and having the police show up on a bogus “man with a gun” call endangers everyone unnecessarily…

…The flyer makes a point of saying that sometimes gun owners hold “demonstrations or events” to raise awareness of the constitutional right to keep and bear arms and those events “may cause alarm” and to call the police if the store owner sees “anything suspicious or of concern.”

Aside from the blatant falsehoods, the flyer appears designed to demonize lawful open carry and to confuse and scare the business into calling the police to confront law-abiding gun owners. It does this by citing laws regarding reckless gun handling to paint a frightening image of gun owners brandishing and shooting up his establishment!

The police, of all people, should NOT mislead the public or actively seek to create a chilling effect on the exercise of civil liberties.”

After receiving hundreds of calls and emails from angry VCDL members, Chief Cook apologized for the flyer, and had a new one with correct information created and distributed to local businesses. However, the question remains, why did APD distribute this irresponsible, fearmongering flyer in the first place? Why wasn’t it properly vetted to make sure it contained accurate information about who could carry firearms and where under state law?

Once again, law enforcement exhibits inexcusable ignorance of the laws they enforce and disdain for the basic rights of citizens.

Once again, law enforcement, the single biggest group of civil rights violators, portrays itself as a protected class of citizens akin to racial and ethnic minorities, religious groups, and the disabled, which is ironic since those groups experience a disproportionate amount of police misconduct, and the fact that cops voluntarily choose to participate in a system of violent oppression and extortion which pits them against the people they claim to protect (even though they went all the way to the Supreme Court to establish that they have no duty to protect).

Once again, law enforcement prioritizes its precious egos and hurt feelings over the very lives and liberties of the people they serve. 58% of citizen complaints against APD officers were sustained in 2015. Did Chief Cook personally rush out to see any of these complainants to “have a conversation. . .and get back onto a normal business relationship,” the way he did with management of Noodles & Company? Were the guilty officers terminated the way the cook and cashier at the restaurant almost surely have been? Doubtful.

And that’s exactly why some people would risk unemployment rather than serve cops food.