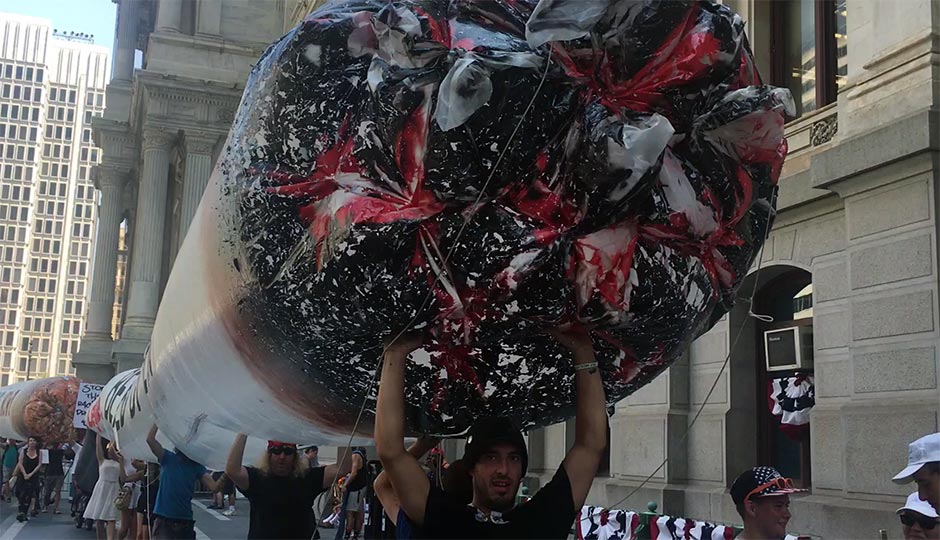 As always, it was an exciting week out there and Cop Block Radio was here to report on it all. Hosts Severin Freeman, Matthew Taylor and guest host Micheal Storm went live at 10 P.M. Wednesday and brought these following stories.

We’ve all watched the fantastic footage shot by Ademo Freeman last week at the Republican National Convention. It was glorious! Live streams from the back of cop cars, handing cops condoms for “safety” and so on. Well, on Tuesday  host Severin Freeman decided to make sure Cop Block was represented at the Democratic National Convention as well.

Day one began in Philadelphia P.A. with hundreds of protesters carrying 90 foot inflatable joints that read “End The Drug War.” On day, two Severin Freeman along with Ricardo Gonzalez joined the protest out side of the convention hall. Severin met up with our old friend The New Jersey Weed Man, Edward Forchion and former Philadelphia Police Captain Ray Lewis. You can check out each interviews by clicking on their names.

Next the show moved on to talk about the Caddo County jail in Oklahoma. Matthew played a video that showed 41 year old Darius Robinson and two civilian guards. It showed Robinson stand up and lean towards Guard Michael Allen Smith. Smith immediately put Robinson in a choke hold, and they fell to the floor. Vicki Lyn Richardson then got involved. Richardson jumped on Robinson’s back and remained in this position until Robinson drew his last breath.

Next the show went on to talk about Ademo Freeman. On July 4th, Ademo started the “#FuckYourBadge” campaign. He kicked it off by burning the gang propaganda known as “The Thin Blue Line Flag”.  As you could imagine, this got a lot of negative feedback. One person in particular found himself very offended. That person was the Host of The Free Fire Effect, John Burk. Burk Fired back on social media with his own campaign which he titled “#FuckAdemo“.  After some online challenges had been laid down, there was an event. Ademo Freeman would call in and debate Burk on Free Fire Effect. CBR weighed in afterwards and the whole debate can be seen here.

Amanda Bergquist called in and updated everyone about events in Saint Paul, Minnesota. People continue to surround the Governors Mansion in protest over the shooting death of Philando Castile. Shortly thereafter, they moved to a press release from Baltimore State’s Attorney Marilyn J. Mosby. Mosby has dropped all charges on the officers involved in the shooting death of Freddie Gray.