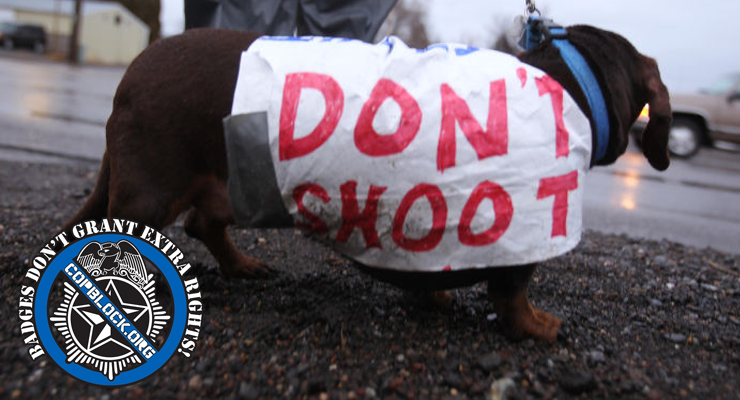 The following post was submitted via the CopBlock.org submission tab by Jessica Morrill, a paralegal for the law office of Matthew Albert, Esq. out of Buffalo, NY. Mr. Albert is the attorney representing the case outlined below.

The police obviously had no choice but to shoot Damian several times… His viciousness is self evident from the photos above.

People, especially suburban folks so far removed from the tyrannical and racist filled atmosphere that defines inner city policing in this country, often ask me how it can be that these narcotic officers, many of whom go to back to their $200,000 homes in East Aurora and pet their golden retrievers, can kill these dogs for sport?

It’s a damn good question. And it’s much easier for such folk to believe the narrative of white, professional looking officers who convincingly say that these dogs aren’t like other dogs, they have been trained by drug dealers to kill and protect the stash, etc. That the deaths of these dogs is just a sad byproduct of the drug trade. It’s much easier for these folk to blame the owners, some of whom are involved in drugs, than the men in uniform that protect the gangsters from coming too far north, south, east, or west.

I know… I believed that garbage narrative told to me by these narco cops for 7 years while I was a DA who had drinks with them and worked hand in hand with them.

Then I saw. I saw the Iraqi war veteran whose house was wrongly hit by the narcotic squad who somehow hit the back apartment when the warrant directed them to the front.

I saw the despair in his eyes as he held the leash and collar, still intact from
where his gorgeous best friend, a two year old mini-pitty named Cindy was tethered when she was shot.

I saw the bloody and gruesome photos of Rocky, a 9 Month old puppy, and paid $750 of my own money to seek an expert forensic medical opinion as to whether he was on his bed, as his owners said, when he was shot. He was.

I saw. And once my eyes opened… They can’t be closed to the horrors perpetrated by these killer cops. I saw. Damian and his family saw. They saw it about 12 hours before a dog named Gotham and his family were subjected to a no knock raid at… wait for it. THE WRONG HOUSE!

I went to the Buffalo Animal Shelter this morning to hand them preservation of evidence letters so these owners could at least have their dogs bodies back for cremation instead of the dogs being incinerated. Narcos, in what is a blatant sign of their desire to kill, call Animal Control to control the dead corpses as opposed to helping control the dogs while alive. They do so because this way, any chance of independent medical testimony to contradict the officers’ utter lies about why he had to shoot a dog goes up in smoke with the dogs’ remains.

The staffer asked me which one was this and told me that many more dogs were shot in this weekends’ raids.
They saw. See, once they stop seeing the citizens in the communities they protect as being people, they also stop seeing the pit bulls and other large breeds as being dogs. The police even refer to them them as “nigger dogs.” Gotham, a sweet harmless Pit Bull, was probably called this as well. Gotham playfully gazed at a loaded shotgun and tried to follow the spotlight on the gun, thinking it was a game. Having been bottle fed by his owner since he was 4 and a half weeks old, Gotham, now one and a half years of age, had only experienced love from everyone he met in his short but blissful existence. Despite the sudden intrusion by 20 armed invaders to his Weaver Street home, he had no reason to think he was to be attacked… he didn’t know what violence and hate looked like.

Until an armed 6’4 300 lb nightmare wearing the uniform of an Officer, name not quite confirmed at the moment, blasted Gotham from a distance of about 10 feet away. He did this after discussing whether they would shoot him or not and ignoring the owner’s pleas to put Gotham in a crate.

Gotham, half his head blown off, still was wagging his tail and walked behind his owner. The sadist with a badge then came over and shot Gotham again, killing him. One of the bullets went through the upstairs apartment floor, almost killing the downstairs tenant. Gotham’s blood seeped through the floor onto the downstairs” tenants floor. She couldn’t do anything to stop the blood flow onto her apartment, she was laying down in her bra and underwear, her hands zip tied together by armed uniformed Officers surrounding her.

After finding nothing to charge the owner with, the Officers brutally wrapped up the lifeless dog and took the body with them, intending to conceal all evidence of their barbaric crime. Leaving the scene, the killer cop mockingly placed his hand on the owner’s shoulder and said, “Sorry bud. This is what happens in raids.”

Do you think this story is horrific? Do you actually want to DO SOMETHING about it? Do you want to stop these sadistic animal killers from torturing the communities they are supposed to protect and serve? Do you want Gotham, Damian, Cindy, Rocky, and all the fallen angels at the hands of these killer cops to be avenged?

If so, we WILL be asking for your help. For now, SHARE this post. Get this out there and expose these crimes against humanity committed by the Buffalo Police Department Narcotics Division.

And if you don’t want to share, make a phone call when we provide numbers. Stand with Gotham, Damian, their heartbroken owners, the two year old boy who will never be the same after seeing Damian blown up in front of him, and us as we seek justice for these angels.

On behalf of all the lost souls and broken hearts caused by these sociopathic killers terrorizing neighborhood blocks, I ask you to stand with me and fight for the justice these angels deserve.

– Jessica Morrill
*I am the paralegal for the law office of Matthew Albert, Esq. out of Buffalo, NY Matt is the attorney representing this case.*