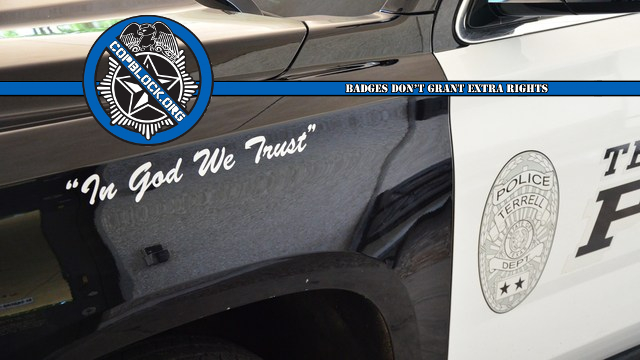 The Terrell Police Department and Crandall Police Department have chosen to thumb their collective noses at the First Amendment by showing that they are partial to those who share their religious beliefs. This is another perfect example of blindness in law enforcement by showing they are more interested in appearance than they are on doing the right thing. The “people” are secondary.

According to Terrell Police Department Captain A.D. Sansom, Chief Jody Lay suggested the addition of the motto to the department’s fleet which garnered support from the command staff.  “Following a movement of several other area agencies, the familiar black and white marked police Tahoes will now proudly display the motto of the United States of America, ‘In God We Trust.’” stated Sansom.

Crandall Police Department Chief Billy Kilgore also suggested the addition of the motto to his department’s fleet last month and gained approval from the Crandall City Council. The motto was placed first on the department’s two new SUVs which were already being outfitted with decals before being placed into service.

In a surprise to absolutely no one, Governor Gregg Abbott applauds the action

Governor Abbott’s Twitter feed is littered with support for public institutions that proudly flaunt anything supporting Christian beliefs. While he hides behind “religious freedom,” it’s clear that this is only when its about the Christian faith.

In November, Texas Attorney General Ken Paxton said in a written opinion that authorities who displayed the motto on their vehicles would likely win any court challenges.

The opinion was issued a month after the Freedom From Religion Foundation challenged the Childress Police Department’s use of the phrase on its patrol cars. Paxton said displaying the motto is  “a passive use of a motto steeped in our nation’s history that does not coerce citizen approval or participation.”

“Does not coerce citizen approval or participation”? WHAT? So now the state’s Attorney General thinks what public employees do with public property doesn’t need citizen approval, participation or even agreement? Still, there is is more to this than recruiting. This kind of thing shows preferential treatment. Are we to believe that a person flaunting their religion with the support of the government will treat people of other faiths exactly the same? How are people of other faiths supposed to feel like an equal?

How would Governor Abbott and AG Paxton feel if one of their police departments chose to put “Allahu Akbar” stickers on their city vehicles? As a lifelong Texan, I can assure you the outrage would be beyond comprehension. Of course, Texans like to throw out the “this country was founded on Christian beliefs”, which is nothing more than false justification. Some people don’t seem to understand the Constitution unless it goes against their personal beliefs.

As difficult as it might be to think this might happen in “Podunk” Texas, what if one of the officers that have to drive one of these vehicles is a Muslim? Could this be considered a hostile work environment? A man or woman being forced to support a religion he or she disagrees with hardly seems fair or equal. I’m sure we’ll still hear plenty of “if they don’t like it, they can go work somewhere else.” Of course, that just further justifies our point here.

Obviously, this is much easier here in the Bible Belt. They know that the volume of the good ol’ boy network will drown out any voices of logic and reason on this.  Abbott and Paxton know votes are more important than law.

This isn’t about anyone trying to stifle anyone’s religious freedom. You can wear your cross around your neck as an individual if you want. This is about showing neutrality in law enforcement as an entity. That no matter what your religious preference is, Christian, Jewish, Muslim, Buddhist, Atheist, Wiccan, or whatever, you are guaranteed the same in the eyes of the law.

Practicing religion should be left to the individual. God never said to force it on others…unless you favor things like the Crusades.