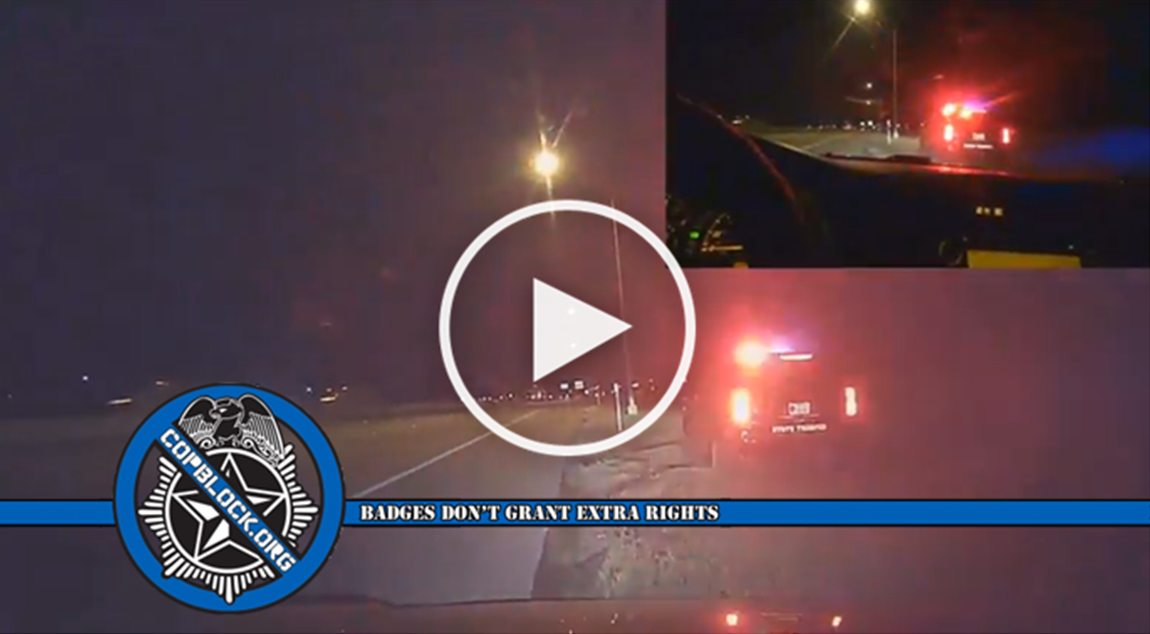 Video has surfaced showing a man pull over a Texas State Trooper after the cop sped by him on the highway with no emergency lights on at speeds in excess of 90 miles per hour.

Recorded by a dash-board camera and uploaded to YouTube on Wednesday by PINAC correspondent Phillip Turner, the footage shows the man driving on a stretch of road that he said had a 75 miles per hour speed limit.

The dash-board camera reveals that the incident took place on Monday, during the morning, according to Turner, who said in the video he was on his way to court to fight a traffic citation.

The footage shows Turner’s speed fluctuate from 75 to 73 miles per hour as a vehicle is seen rushing past him. After the trooper flies by, he pursues him at speeds as high as 91 miles per hour.

Finally, after a chase lasting about six minutes, Turner is able to signal to the trooper by honking his horn and flashing his lights at him. The trooper then turns his emergency lights on, pulls over on the side of the highway, and gets out of his vehicle.

“Can I help you?” the trooper is heard saying. “Is there a reason why you were flashing for me? Do you need some help?”

“The reason why I pulled you over is, you flew right by me,” Turner says. “You were going pretty fast back there. Are you in an emergency? People get tickets for that all the time.”

“I apologize for that sir,” the trooper says.

“I don’t have it on me,” the trooper says before evading the question again and finally revealing that his badge number is “14055” and that his last name is “Granado.”

After taking the troopers info, Turner asks him if he can take a picture of his license plate. The trooper responds by saying “go ahead.” The license plate reads “05933.”

Turner then asks for a business card and the trooper says he doesn’t have one. He asks for the officer’s badge number and name again for the record and the cop apologizes after being caught in the act.

“Man I told you, I apologize,” the trooper says. “There’s no excuse. I got no excuse.”

Turner then returns to his car and trooper Granado pulls away. I have attempted to reach out to Turner for comment, but he has not yet gotten back to me. He did offer some comments on his YouTube page though.

“I will say this officer was very respectful, honest and owned up to the mistake,” he said. “However, the issue I have is that people get citations for speeding all the time I think everyone should be held to the same standards.”